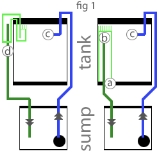 Overview
A reef aquarium or reef tank is an marine aquarium
Marine aquarium
A marine aquarium is an aquarium that keeps marine plants and animals in a contained environment. Marine aquaria are further subdivided by hobbyists into fish only , fish only with live rock , and reef aquaria. Fish only tanks often showcase large or aggressive marine fish species and generally...
that prominently displays live coral
Coral
Corals are marine animals in class Anthozoa of phylum Cnidaria typically living in compact colonies of many identical individual "polyps". The group includes the important reef builders that inhabit tropical oceans and secrete calcium carbonate to form a hard skeleton.A coral "head" is a colony of...
s and other marine invertebrates
Marine invertebrates
Marine invertebrates are animals that inhabit a marine environment and are invertebrates, lacking a vertebral column. In order to protect themselves, they may have evolved a shell or a hard exoskeleton, but this is not always the case....
as well as fish that play a role in maintaining the coral reef environment. A reef aquarium requires appropriately intense lighting, turbulent water movement, and more stable water chemistry than fish-only marine aquaria, and careful consideration is given to which reef animals are appropriate and compatible with each other.
Reef aquariums consist of a number of components, in addition to the livestock, including:

Display tank: The primary tank in which the livestock are kept and shown.

Stand: A stand allows for placement of the display tank at eye level and provides space for storage of the accessory components.

Sump: An accessory tank in which mechanical equipment is kept.

What kind of lighting is used in germany for saltwater reef tanks?
More
x