The reed switch is an electrical switch operated by an applied magnetic field
Magnetic field
A magnetic field is a mathematical description of the magnetic influence of electric currents and magnetic materials. The magnetic field at any given point is specified by both a direction and a magnitude ; as such it is a vector field.Technically, a magnetic field is a pseudo vector;...
. It was invented at Bell Telephone Laboratories in 1936 by W. B. Ellwood. It consists of a pair of contacts
Electrical connector
An electrical connector is an electro-mechanical device for joining electrical circuits as an interface using a mechanical assembly. The connection may be temporary, as for portable equipment, require a tool for assembly and removal, or serve as a permanent electrical joint between two wires or...
on ferrous metal reeds in a hermetically sealed
Hermetic seal
A hermetic seal is the quality of being airtight. In common usage, the term often implies being impervious to air or gas. When used technically, it is stated in conjunction with a specific test method and conditions of usage.-Etymology :...
glass
Glass
Glass is an amorphous solid material. Glasses are typically brittle and optically transparent.The most familiar type of glass, used for centuries in windows and drinking vessels, is soda-lime glass, composed of about 75% silica plus Na2O, CaO, and several minor additives...
envelope. The contacts may be normally open, closing when a magnetic field is present, or normally closed and opening when a magnetic field is applied. The switch may be actuated by a coil, making a reed relay
Reed relay
A reed relay is a type of relay that uses an electromagnet to control one or more reed switches. The contacts are of magnetic material and the electromagnet acts directly on them without requiring an armature to move them...
, or by bringing a magnet
Magnet
A magnet is a material or object that produces a magnetic field. This magnetic field is invisible but is responsible for the most notable property of a magnet: a force that pulls on other ferromagnetic materials, such as iron, and attracts or repels other magnets.A permanent magnet is an object...
near to the switch. Once the magnet is pulled away from the switch, the reed switch will go back to its original position.

The reed switch contains a pair (or more) of magnetizable, flexible, metal reeds whose end portions are separated by a small gap when the switch is open. The reeds are hermetically sealed in opposite ends of a tubular glass envelope. 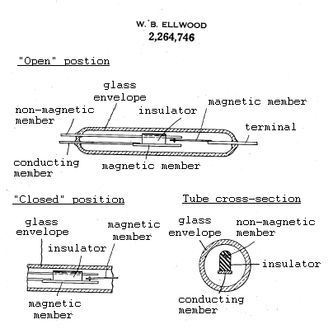 A magnetic field
Magnetic field
A magnetic field is a mathematical description of the magnetic influence of electric currents and magnetic materials. The magnetic field at any given point is specified by both a direction and a magnitude ; as such it is a vector field.Technically, a magnetic field is a pseudo vector;...
(from an electromagnet
Electromagnet
An electromagnet is a type of magnet in which the magnetic field is produced by the flow of electric current. The magnetic field disappears when the current is turned off...
or a permanent magnet) will cause the reeds to come together, thus completing an electrical circuit. The stiffness of the reeds causes them to separate, and open the circuit, when the magnetic field ceases. Another configuration contains a non-ferrous normally-closed contact that opens when the ferrous normally-open contact closes. Good electrical contact is assured by plating a thin layer of non-ferrous precious metal over the flat contact portions of the reeds; low-resistivity silver
Silver
Silver is a metallic chemical element with the chemical symbol Ag and atomic number 47. A soft, white, lustrous transition metal, it has the highest electrical conductivity of any element and the highest thermal conductivity of any metal...
is more suitable than corrosion
Corrosion
Corrosion is the disintegration of an engineered material into its constituent atoms due to chemical reactions with its surroundings. In the most common use of the word, this means electrochemical oxidation of metals in reaction with an oxidant such as oxygen...
-resistant gold
Gold
Gold is a chemical element with the symbol Au and an atomic number of 79. Gold is a dense, soft, shiny, malleable and ductile metal. Pure gold has a bright yellow color and luster traditionally considered attractive, which it maintains without oxidizing in air or water. Chemically, gold is a...
in the sealed envelope. There are also versions of reed switches with mercury
Mercury (element)
Mercury is a chemical element with the symbol Hg and atomic number 80. It is also known as quicksilver or hydrargyrum...
"wetted" contacts. Such switches must be mounted in a particular orientation otherwise drops of mercury may bridge the contacts even when not activated.

Since the contacts of the reed switch are sealed away from the atmosphere, they are protected against atmospheric corrosion
Corrosion
Corrosion is the disintegration of an engineered material into its constituent atoms due to chemical reactions with its surroundings. In the most common use of the word, this means electrochemical oxidation of metals in reaction with an oxidant such as oxygen...
. The hermetic sealing of a reed switch make them suitable for use in explosive atmospheres where tiny sparks from conventional switches would constitute a hazard.

One important quality of the switch is its sensitivity, the amount of magnetic field
Magnetic field
A magnetic field is a mathematical description of the magnetic influence of electric currents and magnetic materials. The magnetic field at any given point is specified by both a direction and a magnitude ; as such it is a vector field.Technically, a magnetic field is a pseudo vector;...
necessary to actuate it. Sensitivity is measured in units of Ampere-turn
Ampere-turn
The ampere-turn was the MKS unit of magnetomotive force , represented by a direct current of one ampere flowing in a single-turn loop in a vacuum...
s, corresponding to the current in a coil multiplied by the number of turns. Typical pull-in sensitivities for commercial devices are in the 10 to 60 AT range. The lower the AT, the more sensitive the reed switch. Also, smaller reed switches, which have smaller parts, are more sensitive to magnetic fields, so the smaller the reed switch's glass envelope is, the more sensitive it is.

In production, a metal reed is inserted in each end of a glass tube and the end of the tube heated so that it seals around a shank portion on the reed. Infrared
Infrared
Infrared light is electromagnetic radiation with a wavelength longer than that of visible light, measured from the nominal edge of visible red light at 0.74 micrometres , and extending conventionally to 300 µm...
-absorbing glass is used, so an infrared heat source can concentrate the heat in the small sealing zone of the glass tube. The thermal coefficient of expansion of the glass material and metal parts must be similar to prevent breaking the glass-to-metal seal
Glass-to-metal seal
Glass-to-metal seals are a very important element of the construction of vacuum tubes, electric discharge tubes, incandescent light bulbs, glass encapsulated semiconductor diodes, reed switches, pressure tight glass windows in metal cases, and metal or ceramic packages of electronic...
.
The glass used must have a high electrical resistance
Electrical resistance
The electrical resistance of an electrical element is the opposition to the passage of an electric current through that element; the inverse quantity is electrical conductance, the ease at which an electric current passes. Electrical resistance shares some conceptual parallels with the mechanical...
and must not contain volatile components such as lead oxide
Lead oxide
Lead oxide may refer to:* Lead oxide, PbO, litharge, massicot* Lead oxide, Pb3O4, minium, red lead* Lead dioxide , PbO2Less common lead oxides are:* Lead oxide, Pb2O3, lead sesquioxide...
and fluoride
Fluoride
Fluoride is the anion F−, the reduced form of fluorine when as an ion and when bonded to another element. Both organofluorine compounds and inorganic fluorine containing compounds are called fluorides. Fluoride, like other halides, is a monovalent ion . Its compounds often have properties that are...
s. The leads of the switch must be handled carefully to prevent breaking the glass envelope.

One or more reed switches inside a coil is a reed relay. Reed relays are used when operating currents are relatively low, and offer high operating speed, good performance with very small currents which are not reliably switched by conventional contacts, high reliability and long life. Millions of reed relays were used in telephone exchanges in the 1970s and 80s. In particular they were used for switching in the British TXE
TXE
TXE, which stands for Telephone eXchange Electronic, was the designation given to a family of telephone exchanges developed by the British General Post Office , now BT, designed to replace the ageing Strowger systems....
family of telephone exchanges. The inert atmosphere around the reed contacts ensures that oxidation will not affect the contact resistance. Mercury-wetted reed relays are sometimes used, especially in high-speed counting circuits. Reliability is compromised by contacts sticking closed either from residual magnetism or welding.

In addition to their use in reed relay
Reed relay
A reed relay is a type of relay that uses an electromagnet to control one or more reed switches. The contacts are of magnetic material and the electromagnet acts directly on them without requiring an armature to move them...
s, reed switches are widely used for electrical circuit control, particularly in the communications field.

Reed switches actuated by magnets are commonly used in mechanical systems as proximity sensor
Proximity sensor
A proximity sensor is a sensor able to detect the presence of nearby objects without any physical contact.A proximity sensor often emits an electromagnetic or a beam of electromagnetic radiation , and looks for changes in the field or return signal. The object being sensed is often referred to as...
s. Examples are door and window sensors in burglar alarm
Burglar alarm
Burglar , alarms are systems designed to detect unauthorized entry into a building or area. They consist of an array of sensors, a control panel and alerting system, and interconnections...
systems and tamperproofing
Tamperproofing
Tamperproofing is a term sometimes used for a methodology used to hinder, deter or detect unauthorised access to a device or circumvention of a security system....
methods (however they can be disabled by a strong, external magnetic field). Reed switches are used in modern laptops to put the laptop on sleep/hibernation mode when the lid is closed. Speed sensors on bicycle
Bicycle
A bicycle, also known as a bike, pushbike or cycle, is a human-powered, pedal-driven, single-track vehicle, having two wheels attached to a frame, one behind the other. A person who rides a bicycle is called a cyclist, or bicyclist....
wheels and car gears use a reed switch to actuate briefly each time a magnet on the wheel passes the sensor. Reed switches were formerly used in the keyboards for computer terminals, where each key had a magnet and a reed switch actuated by depressing the key; cheaper switches are now used. Electric and electronic pedal keyboards used by pipe organ
Pipe organ
The pipe organ is a musical instrument that produces sound by driving pressurized air through pipes selected via a keyboard. Because each organ pipe produces a single pitch, the pipes are provided in sets called ranks, each of which has a common timbre and volume throughout the keyboard compass...
and Hammond organ
Hammond organ
The Hammond organ is an electric organ invented by Laurens Hammond in 1934 and manufactured by the Hammond Organ Company. While the Hammond organ was originally sold to churches as a lower-cost alternative to the wind-driven pipe organ, in the 1960s and 1970s it became a standard keyboard...
players often use reed switches, where the glass enclosure of the contacts protects them from dirt, dust, and other particles.