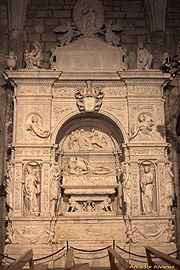 Ramón Folc de Cardona y Anglesola (Italian: Raimondo di Cardona) (1467 – 10 March 1522) was a Spanish general and politician, who served as the viceroy of Naples during the Italian Wars
Italian Wars
The Italian Wars, often referred to as the Great Italian Wars or the Great Wars of Italy and sometimes as the Habsburg–Valois Wars, were a series of conflicts from 1494 to 1559 that involved, at various times, most of the city-states of Italy, the Papal States, most of the major states of Western...
and commanded the Spanish forces in Italy during the War of the League of Cambrai
War of the League of Cambrai
The War of the League of Cambrai, sometimes known as the War of the Holy League and by several other names, was a major conflict in the Italian Wars...
. He was granted the title count of Oliveto in the Kingdom of Naples
Kingdom of Naples
The Kingdom of Naples, comprising the southern part of the Italian peninsula, was the remainder of the old Kingdom of Sicily after secession of the island of Sicily as a result of the Sicilian Vespers rebellion of 1282. Known to contemporaries as the Kingdom of Sicily, it is dubbed Kingdom of...
, on 12 December 1515.

The son of Antoni de Cardona-Anglesola i Centelles and Castellana de Requesens, he was 5th Baron of Bellpuig
Bellpuig
Bellpuig is a town in the comarca of l'Urgell in Catalonia, Spain.Nowadays Bellpuig is the third most important village in the area of Urgell....
, Baron of Linyola
Linyola
Linyola is a small municipality in the comarca of Pla d'Urgell in Catalonia, Spain.Notable individuals associated with Linyola:*Josep Maria Fusté , former FC Barcelona midfielder, was born here.*Bojan Krkić , AS Roma striker, was born here....
and Baron of Utxafavá, all three places in Catalonia
Catalonia
Catalonia is an autonomous community in northeastern Spain, with the official status of a "nationality" of Spain. Catalonia comprises four provinces: Barcelona, Girona, Lleida, and Tarragona. Its capital and largest city is Barcelona. Catalonia covers an area of 32,114 km² and has an...
. Ramón de Cardona was born in Bellpuig, to one of the greatest families in the Crown of Aragon
Crown of Aragon
The Crown of Aragon Corona d'Aragón Corona d'Aragó Corona Aragonum controlling a large portion of the present-day eastern Spain and southeastern France, as well as some of the major islands and mainland possessions stretching across the Mediterranean as far as Greece...
, the Cardona. On 12 December 1502 he was awarded the title of Duke of Soma, taking part in 1505, with the role of admiral, in the capture of Mers-el-Kébir
Mers-el-Kébir
Mers-el-Kébir is a port town in northwestern Algeria, located by the Mediterranean Sea near Oran, in the Oran Province.-History:Originally a Roman port, Mers-el-Kébir became an Almohad naval arsenal in the 12th century, fell under the rulers of Tlemcen in the 15th century, and eventually became a...
.

King Ferdinand II of Aragon
Ferdinand II of Aragon
Ferdinand the Catholic was King of Aragon , Sicily , Naples , Valencia, Sardinia, and Navarre, Count of Barcelona, jure uxoris King of Castile and then regent of that country also from 1508 to his death, in the name of...
, of whom he has been postulated to be a natural son, made him Viceroy of Naples in 1505. He stayed as Viceroy of Naples till 1507, being a Viceroy of Sicily from 1507 to 1509 and coming back to Naples and staying there till his death in 1522. In 1510 he received instructions on introducing the Inquisition
Inquisition
The Inquisition, Inquisitio Haereticae Pravitatis , was the "fight against heretics" by several institutions within the justice-system of the Roman Catholic Church. It started in the 12th century, with the introduction of torture in the persecution of heresy...
in Naples, a decision which caused a popular revolt; after which the Spanish king canceled the decree.
In 1511 Cardona moved to northern Italy as the commander-in-chief of the League of Cambrai army, leaving the Neapolitan government to his wife Isabel de Requesens, 2nd countess of Palamós
Palamós
Palamós is a town and municipality in the Mediterranean Costa Brava, located in the comarca of Baix Empordà, in the province of Girona, Catalonia, Spain....
, 2nd countess of Avellino
Avellino
Avellino is a town and comune, capital of the province of Avellino in the Campania region of southern Italy. It is situated in a plain surrounded by mountains 42 km north-east of Naples and is an important hub on the road from Salerno to Benevento.-History:Before the Roman conquest, the...
, 2nd countess of Trivento
Trivento
Trivento is a comune in the Province of Campobasso in the Italian region Molise, located about 25 km northwest of Campobasso...
, baroness of Calonge
Calonge
Calonge is a municipality in the comarca of the Baix Empordà in Catalonia, Spain.The town comprises two parts, a medieval hill village and modern seaside resort. The main urban centre and original village is about 4 km inland from the Bay of Sant Antoni...
, daughter of Galceran de Requesens the first holder of these titles.
In the following year he was defeated by Gaston of Foix, Duke of Nemours at the Battle of Ravenna
Battle of Ravenna (1512)
The Battle of Ravenna, fought on 11 April 1512, by forces of the Holy League and France, was a major battle of the War of the League of Cambrai in the Italian Wars...
. Cardona then moved to Tuscany to support the then Spanish-supported House of Medici. His troops besieged Prato
Prato
Prato is a city and comune in Tuscany, Italy, the capital of the Province of Prato. The city is situated at the foot of Monte Retaia , the last peak in the Calvana chain. The lowest altitude in the comune is 32 m, near the Cascine di Tavola, and the highest is the peak of Monte Cantagrillo...
, massacring the population after its fall.

In 1513 Cardona returned to Lombardy
Lombardy
Lombardy is one of the 20 regions of Italy. The capital is Milan. One-sixth of Italy's population lives in Lombardy and about one fifth of Italy's GDP is produced in this region, making it the most populous and richest region in the country and one of the richest in the whole of Europe...
with a new army the following year and fought successfully at the Battle of La Motta
Battle of La Motta (1513)
The Battle of La Motta, also known as the Battle of Schio, Battle of Vicenza or Battle of Creazzo, took place at Schio, in the Italian region of Veneto, Republic of Venice, on 7 October, 1513, between the forces of the Republic of Venice and Spain, and was a significant battle of the War of the...
, defeating the Venetian
Republic of Venice
The Republic of Venice or Venetian Republic was a state originating from the city of Venice in Northeastern Italy. It existed for over a millennium, from the late 7th century until 1797. It was formally known as the Most Serene Republic of Venice and is often referred to as La Serenissima, in...
army led by Bartolomeo d'Alviano
Bartolomeo d'Alviano
Bartolomeo d'Alviano was an Italian condottiero and captain who distinguished himself in the defence of the Venetian Republic against the Holy Roman Emperor Maximilian.-Biography:...
. He was however unable to prevent the Venetians from joining with the French
France
The French Republic , The French Republic , The French Republic , (commonly known as France , is a unitary semi-presidential republic in Western Europe with several overseas territories and islands located on other continents and in the Indian, Pacific, and Atlantic oceans. Metropolitan France...
at the Battle of Marignano
Battle of Marignano
The Battle of Marignano was fought during the phase of the Italian Wars called the War of the League of Cambrai, between France and the Old Swiss Confederacy. It took place on September 13 and 15, 1515, near the town today called Melegnano, 16 km southeast of Milan...
.

In February 1513, after the death of Pope Julius II, (1443–1513), a.k.a. Giuliano della Rovere  and the arrival in Italy of King Francis I of France
Francis I of France
Francis I was King of France from 1515 until his death. During his reign, huge cultural changes took place in France and he has been called France's original Renaissance monarch...
, Cardona was called back to Spain. In 1515 he had received the title of Count of Alvito, a fiefdom in what is now southern Lazio. In 1519 the new king of Spain, Charles I of Spain, a.k.a. Charles V, Holy Roman Emperor
Charles V, Holy Roman Emperor
Charles V was ruler of the Holy Roman Empire from 1519 and, as Charles I, of the Spanish Empire from 1516 until his voluntary retirement and abdication in favor of his younger brother Ferdinand I and his son Philip II in 1556.As...
, made him Great Admiral of the Kingdom of Naples
Kingdom of Naples
The Kingdom of Naples, comprising the southern part of the Italian peninsula, was the remainder of the old Kingdom of Sicily after secession of the island of Sicily as a result of the Sicilian Vespers rebellion of 1282. Known to contemporaries as the Kingdom of Sicily, it is dubbed Kingdom of...
.