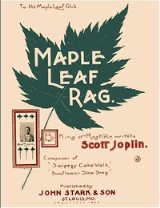 Overview
Ragtime is an original musical genre which enjoyed its peak popularity between 1897 and 1918. Its main characteristic trait is its syncopated
Syncopation
In music, syncopation includes a variety of rhythms which are in some way unexpected in that they deviate from the strict succession of regularly spaced strong and weak but also powerful beats in a meter . These include a stress on a normally unstressed beat or a rest where one would normally be...
, or "ragged," rhythm. It began as dance music in the red-light district
Red-light district
A red-light district is a part of an urban area where there is a concentration of prostitution and sex-oriented businesses, such as sex shops, strip clubs, adult theaters, etc...
s of American cities such as St. Louis
St. Louis, Missouri
St. Louis is an independent city on the eastern border of Missouri, United States. With a population of 319,294, it was the 58th-largest U.S. city at the 2010 U.S. Census. The Greater St...
and New Orleans years before being published as popular sheet music for piano. It was a modification of the march
March (music)
A march, as a musical genre, is a piece of music with a strong regular rhythm which in origin was expressly written for marching to and most frequently performed by a military band. In mood, marches range from the moving death march in Wagner's Götterdämmerung to the brisk military marches of John...
made popular by John Philip Sousa
John Philip Sousa
John Philip Sousa was an American composer and conductor of the late Romantic era, known particularly for American military and patriotic marches. Because of his mastery of march composition, he is known as "The March King" or the "American March King" due to his British counterpart Kenneth J....
, with additional polyrhythm
Polyrhythm
Polyrhythm is the simultaneous sounding of two or more independent rhythms.Polyrhythm in general is a nonspecific term for the simultaneous occurrence of two or more conflicting rhythms, of which cross-rhythm is a specific and definable subset.—Novotney Polyrhythms can be distinguished from...
s coming from African music.

"And although the newspapers called the shooting the Crime of the Century, Goldman knew it was only 1906" "...and there were 94 years to go!" "Wheee..."

"But what of the people who stay where they're put, Planted like flowers with roots underfoot? I know some of those people have hearts that would rather Go journeying on the sea."

"There was a time Our happiness seemed never-ending I was so sure That where we were heading was right Life was a road So certain and straight and unbending Our little road With never a cross road in sight Back in the days When we spoke in civilized voices Women in white And sturdy young men at the oar Back in the days When I let you make all my choices... We can never go back to before "

"Two men finding, for a moment, in the darkness, They're the same."

"You and your music, singing deep within me, making nice to me, saying something so new. Play that melody, your sweet melody, calling my heart to you."

"He wanted to say, I am sick of the injustices. He wanted to say, give me something to believe! In my sould I am your brother, we are bound to one another, angered by the darkness in light, and the lies we perceive."

"And her words rang out like arrows and they pierced him. He felt flushed and overheated as a boy as she filled and overwhelmed him with a fierce and sudden joy!"

"This is not the America he came here for. None of us did. None of us!"

"In the gutters of the city I have tried to find some meaning In the arms of fallen women In the thought of suicide Like a firework, unexploded, Wanting life but never knowing how..."

"And say to those who blame us for the way we chose to fightThat sometimes there are battles that are more than black or whiteAnd Icould not put down my sword when justice was my right."