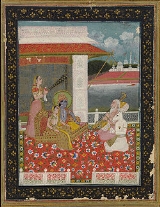 It is a series of five or more musical notes upon which a melody
Melody
A melody , also tune, voice, or line, is a linear succession of musical tones which is perceived as a single entity...
is made. However, it is important to remember that the way the notes are rendered in musical phrases and the mood they convey are even more important in defining a raga than the notes themselves. In the Indian musical tradition, rāgas are associated with different times of the day, or with seasons.

Can i know the raga for the Bharathiyar song ' Kakkai siraginilae.."?