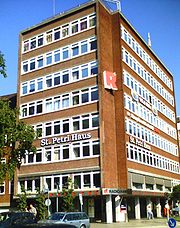 Radio Hamburg is a private commercial radio station set up in the '80s to play the big hits of the times. Nowadays it plays hits from the '90s onwards, on high rotation. Their slogan is "Die Mega-Hits der 90er, 2000er und dem Besten von heute“. (Translation: The mega hits of the nineties, two-thousands and the best of today.) Its services also include reports on weather and traffic. Its website also has a ticket service for all the big concerts, a live web stream and an online shop. Since August 2008, Radio Hamburg is broadcast from the Semperhaus in Hamburg.

Translates as Easter Mega Hit Marathon. Since 1989 every Easter the station has a marathon where they play 800 "Mega Hits" over 24–48 hours during Easter. It is usually held in the biggest arena in Hamburg
Hamburg
-History:The first historic name for the city was, according to Claudius Ptolemy's reports, Treva.But the city takes its modern name, Hamburg, from the first permanent building on the site, a castle whose construction was ordered by the Emperor Charlemagne in AD 808...
, the Volksparkstadion, which is the stadium of the local football team Hamburger SV
Hamburger SV
Hamburger Sport-Verein, usually referred to as HSV in Germany and Hamburg in international parlance, is a German multi-sport club based in Hamburg, its largest branch being its football department...
, but in the last years, it was held on the street next to the station, with a big stage.

'Radio Hamburg Mega Talent' is a casting for people, who try their luck by auditioning in front of a jury, that consists of three people. The listener of the Radio Hamburg are voting for their favorite competitor or rather said candidate afterwards. According to this principle the candidates are elected out of the casting, so that there are only two candidates left. They begin to sing against each other. The listener may decide which competitor shall win 'Radio Hamburg Mega Talent'. Finally they are meeting once more and they get to the studio of Radio Hamburg. They are standing face to face and the sum of votings made by the listener who has voted online for in his opinion best candidate are read. It decides who wins the competition. The winner gets money in the amount of 20,000 €/25,000 €.