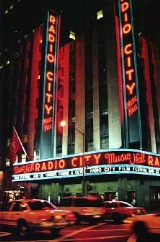 Overview
Radio City Music Hall is an entertainment venue located in New York City's Rockefeller Center
Rockefeller Center
Rockefeller Center is a complex of 19 commercial buildings covering between 48th and 51st streets in New York City, United States. Built by the Rockefeller family, it is located in the center of Midtown Manhattan, spanning the area between Fifth Avenue and Sixth Avenue. It was declared a National...
. Its nickname is the Showplace of the Nation, and it was for a time the leading tourist destination in the city. Its interior was declared a city landmark in 1978.
The 12-acre (49,000 m²) complex in midtown Manhattan
Manhattan
Manhattan is the oldest and the most densely populated of the five boroughs of New York City. Located primarily on the island of Manhattan at the mouth of the Hudson River, the boundaries of the borough are identical to those of New York County, an original county of the state of New York...
known as Rockefeller Center was developed between 1929 and 1940 by John D. Rockefeller, Jr.
John D. Rockefeller, Jr.
John Davison Rockefeller, Jr. was a major philanthropist and a pivotal member of the prominent Rockefeller family. He was the sole son among the five children of businessman and Standard Oil industrialist John D. Rockefeller and the father of the five famous Rockefeller brothers...
, on land leased from Columbia University
Columbia University
Columbia University in the City of New York is a private, Ivy League university in Manhattan, New York City. Columbia is the oldest institution of higher learning in the state of New York, the fifth oldest in the United States, and one of the country's nine Colonial Colleges founded before the...
.

Are there other up-coming performances like the Christmas spectular that make very good use of the facility (staging, effects, etc)?

Two questions: 1. Is Joseph Michetti the artist who painted this portrait of Radio City Music Hall and where is this painting located? and: ...
More
x