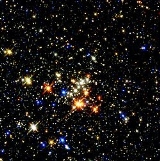 Encyclopedia
The Quintuplet cluster is a dense cluster
Star cluster
Star clusters or star clouds are groups of stars. Two types of star clusters can be distinguished: globular clusters are tight groups of hundreds of thousands of very old stars which are gravitationally bound, while open clusters, more loosely clustered groups of stars, generally contain less than...
of massive young stars near the Galactic Center
Galactic Center
The Galactic Center is the rotational center of the Milky Way galaxy. It is located at a distance of 8.33±0.35 kpc from the Earth in the direction of the constellations Sagittarius, Ophiuchus, and Scorpius where the Milky Way appears brightest...
(GC). Its name comes from the fact it has five prominent supergiant stars residing in it. Along with the Arches cluster
Arches Cluster
The Arches Cluster is the densest known star cluster in the Milky Way, and islocated about 100 light years away from the center of our galaxy, in the constellation Sagittarius....
it is one of two in the immediate GC region. Due to heavy extinction by dust in the vicinity, it is invisible to optical observation and must be studied in the X-ray
X-ray astronomy
X-ray astronomy is an observational branch of astronomy which deals with the study of X-ray observation and detection from astronomical objects. X-radiation is absorbed by the Earth's atmosphere, so instruments to detect X-rays must be taken to high altitude by balloons, sounding rockets, and...
, radio
Radio astronomy
Radio astronomy is a subfield of astronomy that studies celestial objects at radio frequencies. The initial detection of radio waves from an astronomical object was made in the 1930s, when Karl Jansky observed radiation coming from the Milky Way. Subsequent observations have identified a number of...
, and infrared
Infrared astronomy
Infrared astronomy is the branch of astronomy and astrophysics that studies astronomical objects visible in infrared radiation. The wavelength of infrared light ranges from 0.75 to 300 micrometers...
bands.

The Quintuplet cluster is approximately 4 million years old, and has a mass in excess of 10,000 times that of the Sun. It also contains the Pistol star
Pistol Star
The Pistol Star is a blue hypergiant and is one of the most luminous known stars in the Milky Way Galaxy.It is one of many massive young stars in the Quintuplet cluster in the Galactic Center region....
, one of the most luminous in the Galaxy, which is probably close to becoming a supernova
Supernova
A supernova is a stellar explosion that is more energetic than a nova. It is pronounced with the plural supernovae or supernovas. Supernovae are extremely luminous and cause a burst of radiation that often briefly outshines an entire galaxy, before fading from view over several weeks or months...
.