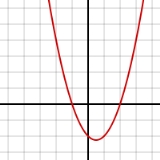 The graph
Graph of a function
In mathematics, the graph of a function f is the collection of all ordered pairs . In particular, if x is a real number, graph means the graphical representation of this collection, in the form of a curve on a Cartesian plane, together with Cartesian axes, etc. Graphing on a Cartesian plane is...
of a quadratic function is a parabola
Parabola
In mathematics, the parabola is a conic section, the intersection of a right circular conical surface and a plane parallel to a generating straight line of that surface...
whose axis of symmetry is parallel to the y-axis.

The coordinates of the vertex,,direction(opening)and equation of the axis of symmetry y=2x+4x-3 and y=(x+2*2)+6
More 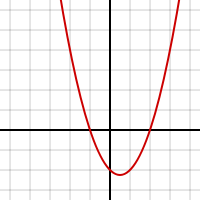 The graph
Graph of a function
In mathematics, the graph of a function f is the collection of all ordered pairs . In particular, if x is a real number, graph means the graphical representation of this collection, in the form of a curve on a Cartesian plane, together with Cartesian axes, etc. Graphing on a Cartesian plane is...
of a quadratic function is a parabola
Parabola
In mathematics, the parabola is a conic section, the intersection of a right circular conical surface and a plane parallel to a generating straight line of that surface...
whose axis of symmetry is parallel to the y-axis.

The adjective quadratic comes from the Latin
Latin
Latin is an Italic language originally spoken in Latium and Ancient Rome. It, along with most European languages, is a descendant of the ancient Proto-Indo-European language. Although it is considered a dead language, a number of scholars and members of the Christian clergy speak it fluently, and...
word quadrātum (“square
Square (geometry)
In geometry, a square is a regular quadrilateral. This means that it has four equal sides and four equal angles...
”). A term like x2 is called a square in algebra because it is the area of a square with side x.

In general, a prefix quadr(i)- indicates the number 4. Examples are quadrilateral and quadrant. Quadratum is the Latin word for square because a square has four sides.

The roots (zeros) of the quadratic function

When the coefficient
Coefficient
In mathematics, a coefficient is a multiplicative factor in some term of an expression ; it is usually a number, but in any case does not involve any variables of the expression...
s a, b, and c, are real or complex, the roots are

Forms of a quadratic function

A quadratic function can be expressed in three formats:


To convert the standard form to factored form, one needs only the quadratic formula to determine the two roots

Regardless of the format, the graph of a quadratic function is a parabola
Parabola
In mathematics, the parabola is a conic section, the intersection of a right circular conical surface and a plane parallel to a generating straight line of that surface...
(as shown above).

The coefficient a controls the speed of increase (or decrease) of the quadratic function from the vertex, bigger positive a makes the function increase faster and the graph appear more closed.

The coefficient b alone is the declivity of the parabola as y-axis intercepts.

The coefficient c controls the height of the parabola, more specifically, it is the point where the parabola intercept the y-axis.

The vertex of a parabola is the place where it turns, hence, it's also called the turning point. If the quadratic function is in vertex form, the vertex is

. By the method of completing the square, one can turn the general form

If the quadratic function is in factored form

the average of the two roots, i.e.,

is the x-coordinate of the vertex, and hence the vertex is

The vertex is also the maximum point if

or the minimum point if

that passes through the vertex is also the axis of symmetry of the parabola.

Using calculus
Calculus
Calculus is a branch of mathematics focused on limits, functions, derivatives, integrals, and infinite series. This subject constitutes a major part of modern mathematics education. It has two major branches, differential calculus and integral calculus, which are related by the fundamental theorem...
, the vertex point, being a maximum or minimum of the function, can be obtained by finding the roots of the derivative
Derivative
In calculus, a branch of mathematics, the derivative is a measure of how a function changes as its input changes. Loosely speaking, a derivative can be thought of as how much one quantity is changing in response to changes in some other quantity; for example, the derivative of the position of a...
:

with the corresponding function value

so again the vertex point coordinates can be expressed as

The square root of a quadratic function

The square root
Square root
In mathematics, a square root of a number x is a number r such that r2 = x, or, in other words, a number r whose square is x...
of a quadratic function gives rise either to an ellipse
Ellipse
In geometry, an ellipse is a plane curve that results from the intersection of a cone by a plane in a way that produces a closed curve. Circles are special cases of ellipses, obtained when the cutting plane is orthogonal to the cone's axis...
or to a hyperbola
Hyperbola
In mathematics a hyperbola is a curve, specifically a smooth curve that lies in a plane, which can be defined either by its geometric properties or by the kinds of equations for which it is the solution set. A hyperbola has two pieces, called connected components or branches, which are mirror...
.If

describes a hyperbola. The axis of the hyperbola is determined by the ordinate
Ordinate
In mathematics, ordinate refers to that element of an ordered pair which is plotted on the vertical axis of a two-dimensional Cartesian coordinate system, as opposed to the abscissa...
of the minimum point of the corresponding parabola

describes either an ellipse or nothing at all. If the ordinate of the maximum point of the corresponding parabola

is positive, then its square root describes an ellipse, but if the ordinate is negative then it describes an empty
Empty set
In mathematics, and more specifically set theory, the empty set is the unique set having no elements; its size or cardinality is zero. Some axiomatic set theories assure that the empty set exists by including an axiom of empty set; in other theories, its existence can be deduced...
locus of points.

, one cannot always deduce the analytic form of

, which means the nth iteration of

. (The superscript can be extended to negative number referring to the iteration of the inverse of

if the inverse exists.) But there is one easier case, in which

In such case, one has

can be obtained, where

can be easily computed as

Such a function describes a quadratic surface
Surface
In mathematics, specifically in topology, a surface is a two-dimensional topological manifold. The most familiar examples are those that arise as the boundaries of solid objects in ordinary three-dimensional Euclidean space R3 — for example, the surface of a ball...
. Setting

, which is a locus
Locus (mathematics)
In geometry, a locus is a collection of points which share a property. For example a circle may be defined as the locus of points in a plane at a fixed distance from a given point....
of points equivalent to a conic section
Conic section
In mathematics, a conic section is a curve obtained by intersecting a cone with a plane. In analytic geometry, a conic may be defined as a plane algebraic curve of degree 2...
.

the function has a minimum if A>0, and a maximum if A<0, its graph forms an elliptic paraboloid.

the function has no maximum or minimum, its graph forms a parabolic cylinder
Cylinder (geometry)
A cylinder is one of the most basic curvilinear geometric shapes, the surface formed by the points at a fixed distance from a given line segment, the axis of the cylinder. The solid enclosed by this surface and by two planes perpendicular to the axis is also called a cylinder...
.

the function achieves the maximum/minimum at a line. Similarly, a minimum if A>0 and a maximum if A<0, its graph forms a parabolic cylinder.