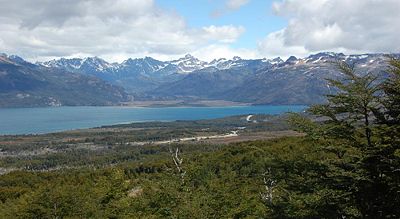 A pull apart basin or strike-slip basin or rhombochasm is type of structural basin which is developed between two offset segments or at a flexure in a strike-slip fault or a transform fault
Transform fault
A transform fault or transform boundary, also known as conservative plate boundary since these faults neither create nor destroy lithosphere, is a type of fault whose relative motion is predominantly horizontal in either sinistral or dextral direction. Furthermore, transform faults end abruptly...
. A pull-apart develops where the sense of offset leads to extension
Extensional tectonics
Extensional tectonics is concerned with the structures formed, and the tectonic processes associated with, the stretching of the crust or lithosphere.-Deformation styles:...
, either at a right-stepping offset on a dextral sense fault or a left-stepping offset on a sinistral fault. This geometry means that fault displacement will literally pull a section of crust
Crust
Crust may refer to:* Crust * The Crust, television seriesPhysical sciences:* Crust , at least continent-wide structure* Soil crust, local biology-sensitive structureFood:* Crust, dense surface layer of bread...
apart and cause the extension. The Dead Sea
Dead Sea
The Dead Sea , also called the Salt Sea, is a salt lake bordering Jordan to the east and Israel and the West Bank to the west. Its surface and shores are below sea level, the lowest elevation on the Earth's surface. The Dead Sea is deep, the deepest hypersaline lake in the world...
and the Salton Sea
Salton Sink
The Salton Sink is a geographic sink in the Coachella and Imperial valleys of southeastern California. It is in the Colorado Desert subregion of the Sonoran Desert ecoregion...
depressions are pull apart basins. The Cayman Trough
Cayman Trough
The Cayman Trough, is a complex transform fault zone pull apart basin which contains a small spreading ridge on the floor of the western Caribbean Sea between Jamaica and the Cayman Islands...
in the northern Caribbean
Caribbean
The Caribbean is a crescent-shaped group of islands more than 2,000 miles long separating the Gulf of Mexico and the Caribbean Sea, to the west and south, from the Atlantic Ocean, to the east and north...
is an example of an elongated pull apart basin which has developed a spreading ridge in the center.

The Gulf of Paria
Gulf of Paria
The Gulf of Paria is a shallow inland sea between the island of Trinidad and the east coast of Venezuela. This sheltered body of water is considered to be one of the best natural harbours on the Atlantic coast of the Americas...
, in the Caribbean is also an example of a pull apart basin. This is due to the movement of the faults named El Pilar to the west and Central Ridge Fault to the east.
The source of this article is wikipedia, the free encyclopedia.  The text of this article is licensed under the GFDL.