Encyclopedia
Ptolemy III Euergetes, was the third ruler of the Ptolemaic dynasty
Ptolemaic dynasty
The Ptolemaic dynasty, was a Macedonian Greek royal family which ruled the Ptolemaic Empire in Egypt during the Hellenistic period. Their rule lasted for 275 years, from 305 BC to 30 BC...
in Egypt
Egypt
Egypt , officially the Arab Republic of Egypt, Arabic: , is a country mainly in North Africa, with the Sinai Peninsula forming a land bridge in Southwest Asia. Egypt is thus a transcontinental country, and a major power in Africa, the Mediterranean Basin, the Middle East and the Muslim world...
.

Euergetes ("Benefactor") was the eldest son of Ptolemy II Philadelphus
Ptolemy II Philadelphus
Ptolemy II Philadelphus was the king of Ptolemaic Egypt from 283 BCE to 246 BCE. He was the son of the founder of the Ptolemaic kingdom Ptolemy I Soter and Berenice, and was educated by Philitas of Cos...
and his first wife, Arsinoe I, and came to power in 246 BC
246 BC
Year 246 BC was a year of the pre-Julian Roman calendar. At the time it was known as the Year of the Consulship of Crassus and Licinus...
upon the death of his father.
He married Berenice of Cyrene
Berenice II
Berenice II was the daughter of Magas of Cyrene and Queen Apama II, and the wife of Ptolemy III Euergetes, the third ruler of the Ptolemaic dynasty of Egypt....
in the year corresponding to 244/243 BC; and their children were:

Ptolemy III Euergetes was responsible for the first known example of a series of decrees published as bilingual inscriptions on massive stone blocks in three writing system
Writing system
A writing system is a symbolic system used to represent elements or statements expressible in language.-General properties:Writing systems are distinguished from other possible symbolic communication systems in that the reader must usually understand something of the associated spoken language to...
s. Ptolemy III's stone stela is the Canopus Stone
Decree of Canopus
The Decree of Canopus is a bilingual inscription in two languages, and in three scripts. It was written in three writing systems: Egyptian hieroglyphs, Egyptian Demotic, and Greek, on an ancient Egyptian memorial stone stele, the Stone of Canopus...
of 238 BC. Other well-known examples are the Memphis Stele (Memphis Stone), bearing the Decree of Memphis, about 218 BC, passed by his son, Ptolemy IV, and the famous Rosetta Stone
Rosetta Stone
The Rosetta Stone is an ancient Egyptian granodiorite stele inscribed with a decree issued at Memphis in 196 BC on behalf of King Ptolemy V. The decree appears in three scripts: the upper text is Ancient Egyptian hieroglyphs, the middle portion Demotic script, and the lowest Ancient Greek...
erected by Ptolemy Epiphanes
Ptolemy V Epiphanes
Ptolemy V Epiphanes , son of Ptolemy IV Philopator and Arsinoe III of Egypt, was the fifth ruler of the Ptolemaic dynasty. He became ruler at the age of five, and under a series of regents the kingdom was paralyzed.-Regency infighting:Ptolemy Epiphanes was only a small boy when his father, Ptolemy...
, his grandson, in 196 BC.

Ptolemy III's stone contains decrees about priestly orders, and is a memorial for his daughter Berenice. But two of its 26 lines of hieroglyph
Egyptian hieroglyphs
Egyptian hieroglyphs were a formal writing system used by the ancient Egyptians that combined logographic and alphabetic elements. Egyptians used cursive hieroglyphs for religious literature on papyrus and wood...
s decree the use of a leap day added to the Egyptian calendar
Egyptian calendar
The ancient civil Egyptian calendar had a year that was 360 days long and was divided into 12 months of 30 days each, plus five extra days at the end of the year. The months were divided into three weeks of ten days each...
of 365 days, and the associated changes in festivals.

He is also credited with the foundation of the Serapeum
Serapeum
A serapeum is a temple or other religious institution dedicated to the syncretic Hellenistic-Egyptian god Serapis, who combined aspects of Osiris and Apis in a humanized form that was accepted by the Ptolemaic Greeks of Alexandria...
. 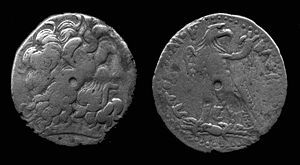 Due to a falling out at the Seleucid court, his eldest sister Berenice Phernophorus
Berenice (Seleucid queen)
Berenice, also called Berenice Syra, was the daughter of Ptolemy II Philadelphus and his first wife Arsinoe I of Egypt.In 261 BC she married the Seleucid monarch Antiochus II Theos, who, following an agreement with Ptolemy , had divorced his wife Laodice I and transferred the succession to...
was murdered along with her infant son. In response Ptolemy III invaded Syria. During this war, the Third Syrian War
Syrian Wars
The Syrian Wars were a series of six wars between the Successor states of the Seleucid Empire and the Ptolemaic Kingdom of Egypt during the 3rd and 2nd centuries BC over the region then called Coele-Syria, one of the few avenues into Egypt...
, he occupied Antioch
Antioch
Antioch on the Orontes was an ancient city on the eastern side of the Orontes River. It is near the modern city of Antakya, Turkey.Founded near the end of the 4th century BC by Seleucus I Nicator, one of Alexander the Great's generals, Antioch eventually rivaled Alexandria as the chief city of the...
and even reached Babylon
Babylon
Babylon was an Akkadian city-state of ancient Mesopotamia, the remains of which are found in present-day Al Hillah, Babil Province, Iraq, about 85 kilometers south of Baghdad...
. In exchange for a peace in 241 BC, Ptolemy was awarded new territories on the northern coast of Syria, including Seleucia Pieria, the port of Antioch. The Ptolemaic kingdom reached the height of its power.

This war is cryptically alluded to in Daniel 11:7-9.