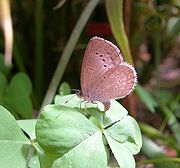 .
The Pale Grass Blue is a small butterfly
Butterfly
A butterfly is a mainly day-flying insect of the order Lepidoptera, which includes the butterflies and moths. Like other holometabolous insects, the butterfly's life cycle consists of four parts: egg, larva, pupa and adult. Most species are diurnal. Butterflies have large, often brightly coloured...
found in Asia that belongs to the Lycaenids or Blues
Lycaenidae
The Lycaenidae are the second-largest family of butterflies, with about 6000 species worldwide, whose members are also called gossamer-winged butterflies...
family.

Male. Upperside silvery light blue with a satiny sheen in certain lights. Forewing: the apical half of the costa narrowly and the terminal margin for varying widths fuscous black, bounded outwardly on the latter by an obscure anticiliary black line. Hindwing: the costa broadly, the termen somewhat more narrowly fuscous black as in the fore wing, with the width of this dark edging similarly variable ; in addition there is a very diffuse and ill-defined subterminal series of spots darker than the fuscous margin.
Underside: brownish grey. Fore wing: a spot in cell, a transverse lunule on the discocellulars, and a transverse anteriorly inwardly curved series of eight discal spots, black; the transverse lunule and each spot encircled with a narrow white edging ; the posterior two spots of the discal series geminate. Beyond these are a postdiseal and a subterminal series of short transverse dusky black spots followed by an anticiliary black line; the ground-colour between the discal and postdiscal series and between the latter and the subterminal series of spots posteriorly paler than on the rest of the wing. Hind wing: a transverse, subbasal, slightly sinuate line of four spots, a short, slender, lunular line on the discocellulars, and a very strongly curved discal series of eight small spots, black; the lunule and each spot encircled with a narrow edging of white; the posterior two spots of the discal series geminate as on the fore wing; beyond these as on the fore wing there is a double line of dusky spots, only more lunular, with between them and between the discal and postdiscal series the ground-colour in the same way followed by slightly paler; an anticiliary fine black line. Cilia of both fore and hind wings whitey brown, darker anteriorly on the fore wing. Antennae, head, thorax and abdomen dark brown, shafts of the antennae ringed with white; in fresh specimens the thorax and abdomen with a little light blue pubescence; beneath: palpi, thorax and abdomen white.

Female Upperside: brownish black; the basal halves of the wings slightly suffused with light blue, anticiliary black lines on both fore and hind wings, and on the latter wing an obscure subterminal series of spots as in the male. Underside, similar,only the ground-colour darker, the markings larger and more clearly defined. Antennae, head, thorax and abdomen as in the male, but with no blue pubescence on the thorax and abdomen on the upperside. 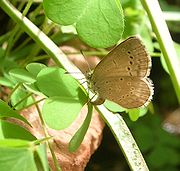 Male upperside: pale bluish-grey with, in some specimens, a pinkish undertone. Forewing: as in the wet-season brood, but the black terminal edging much reduced in width in some specimens to a transverse, somewhat diffuse, very narrow band that borders the anticiliary black line on the inner side, in others to a much broader similar band that coalesces with the anticiliary black line and occupies about the outer sixth of the wing. This edging along the termen is sometimes even, sometimes it widens from a slender anticiliary at and above the tornus to a, broad black patch at the apex of the wing. 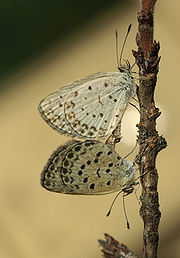 Hindwing: the terminal black edging much narrower proportionately than in wet-season specimens, most often reduced to a slender black anticiliary line with a series of black spots on the inner side, bordering and sometimes coalescing with the line. Underside: as in the wet-season brood but the ground-colour paler, in some specimens much paler, the markings on both fore and hind wings similar, with frequently the terminal markings obsolescent, sometimes entirely absent or only indicated anteriorly on each wing. Cilia whitish. Antennae, head, thorax, and abdomen as in the wet-season specimens. 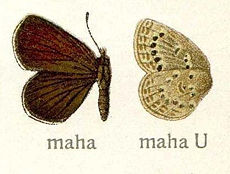 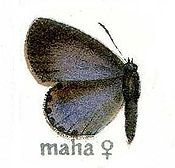 Female similar to the female of the wet-season brood, but more like the male, with the light silvery-blue suffusion very irregular, but generally extended much further outwards from the base. Underside: as in the male, the ground-colour slightly darker. Other variations exist:
Antenna, head, thorax and abdomen similar to those of the male.

The eggs are laid on the host plants and the larvae hatch to feed on them. The plants include members of the Oxalidaceae
Oxalidaceae
The Oxalidaceae, or wood sorrel family, are a small family of eight genera of herbaceous plants, shrubs and small trees, with the great majority of the 900 species in the genus Oxalis...
including Oxalis corniculata, some Leguminosae and Acanthaceae
Acanthaceae
The family Acanthaceae is a taxon of dicotyledonous flowering plants containing almost 250 genera and about 2500 species....
.

A study in Japan used this species to detect the side-effects of transgenic Bt corn, particularly by way of pollen falling onto leaves of the Oxalis host plants. No significant effect was found in that study.