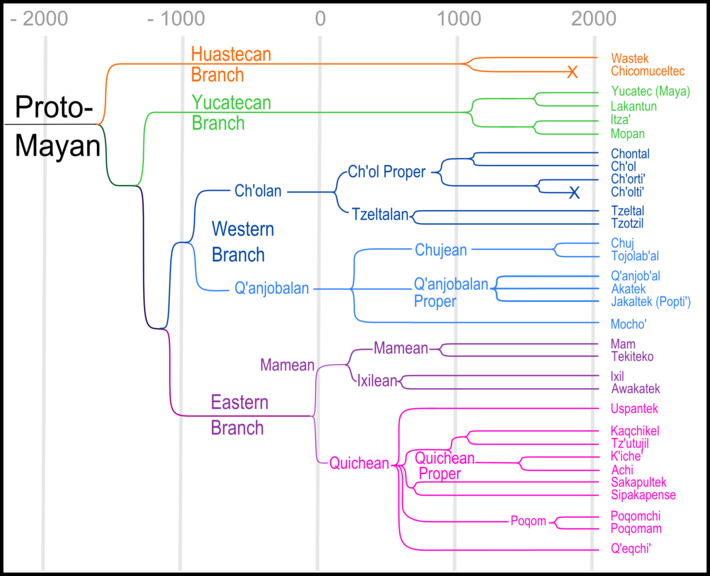 The Proto-Mayan language is reconstructed (Campbell and Kaufman 1985) as having the following sounds:

The following set of sound changes from proto-Mayan to the modern languages are used as the basis of the classification of the Mayan languages. Each sound change may be shared by a number of languages; a grey background indicates no change.


The changes of Proto-Mayan glottal fricative [h] are many and it has different reflexes according to position. In some positions it has added length to the preceding vowel in languages that preserve a length distinction. In other languages it has the reflexes [w], [j], [ʔ], [x] or a zero-reflex.

Only K'ichean-Mamean and some Q'anjob'alan languages have retained Proto-Mayan uvular stops [q] and [qʼ] whereas all other branches have changed these into [k] and [kʼ] respectively.

In Mamean a chain shift took place changing *[r] into [t], *[t] into [tʃ], *[tʃ] into [tʂ] and *[ʃ] into [ʂ]. These retroflex affricates and fricatives later diffused into Q'anjob'alan.

In polysyllabic words Kaqchikel and Tz'utujil have changed a final Proto-Mayan *[w] and *[ɓ] into [j] and *[ʔ] respectively.

Huastecan is the only branch to have changed Proto-Mayan *[w] into [b]. Wastek also is the only Mayan language to have a phonemic labialized velar phoneme [kʷ], but this is known to be a postcolonial development. Comparing colonial documents in Wastek to modern Wastek it can be seen that they were originally clusters of [k] and a rounded vowel followed by a glide. For example the word for "vulture" which in modern Wastek is pronounced [kʷiːʃ] was written in colonial Wastek and pronounced [kuwiːʃ].

The Yucatecan languages have all shifted Proto-Mayan *[t] into [tʃ] in wordfinal position.

Several languages particularly Cholan and Yucatecan have changed short [a] into [ɨ].

All Cholan languages have changed long proto-Mayan vowels [eː] and [oː] into [i] and [u] respectively.

Vowel length distinction has been lost in Q'anjob'alan-Chujean (except for Mocho' and Akateko), Kaqchikel and Cholan. Some languages have reduced the vowel length distinction into a tense lax distinction that was later lost for most vowels, Kaqchikel however retains a centralized lax schwa
Schwa
In linguistics, specifically phonetics and phonology, schwa can mean the following:*An unstressed and toneless neutral vowel sound in some languages, often but not necessarily a mid-central vowel...
-like vowel as a reflex of Proto-Mayan [a]. Two languages, Yukatek and Uspantek and one dialect of Tzotzil have introduced a tone
Tone (linguistics)
Tone is the use of pitch in language to distinguish lexical or grammatical meaning—that is, to distinguish or inflect words. All verbal languages use pitch to express emotional and other paralinguistic information, and to convey emphasis, contrast, and other such features in what is called...
distinction in vowels between high and low tones as reflexes of former vowel length and [h] and [ʔ].