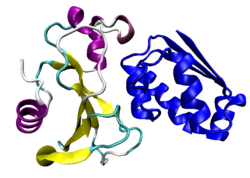 Protein complexes are a form of quaternary structure
Quaternary structure
In biochemistry, quaternary structure is the arrangement of multiple folded protein or coiling protein molecules in a multi-subunit complex.-Description and examples:...
. Proteins in a protein complex are linked by non-covalent protein–protein interactions, and different protein complexes have different degrees of stability over time. These complexes are a cornerstone of many (if not most) biological processes and together they form various types of molecular machinery that perform a vast array of biological functions. Increasingly, scientists view the cell as composed of modular supramolecular complexes, each of which performs an independent, discrete biological function. By existing in proximity, the speed and selectivity of binding interactions between enzymatic complex and substrates can be vastly improved, leading to higher cellular efficiency. Unfortunately, many of the techniques used to break open cells and isolate proteins are inherently disruptive to such large complexes, so their protein complexes within the cell may be even more widespread than can be detected. Examples include the proteasome
Proteasome
Proteasomes are very large protein complexes inside all eukaryotes and archaea, and in some bacteria.  In eukaryotes, they are located in the nucleus and the cytoplasm.  The main function of the proteasome is to degrade unneeded or damaged proteins by proteolysis, a chemical reaction that breaks...
for molecular degradation, the metabolon
Metabolon
A metabolon is a temporary structural-functional complex formed between sequential enzymes of a metabolic pathway, held together by noncovalent interactions, and structural elements of the cell such as integral membrane proteins and proteins of the cytoskeleton....
for oxidative energy generation, and the ribosome
Ribosome
A ribosome is a component of cells that assembles the twenty specific amino acid molecules to form the particular protein molecule determined by the nucleotide sequence of an RNA molecule....
for protein sythesis. In stable complexes, large hydrophobic interfaces between proteins typically bury surface areas larger than 2500 square angstroms.

However, complexes need not be stable. Understanding the functional interactions of proteins is an important research focus in biochemistry
Biochemistry
Biochemistry, sometimes called biological chemistry, is the study of chemical processes in living organisms, including, but not limited to, living matter. Biochemistry governs all living organisms and living processes...
and cell biology
Cell biology
Cell biology is a scientific discipline that studies cells – their physiological properties, their structure, the organelles they contain, interactions with their environment, their life cycle, division and death. This is done both on a microscopic and molecular level...
. Protein complex formation sometimes serves to activate or inhibit one or more of the complex members and in this way, protein complex formation can be similar to phosphorylation
Phosphorylation
Phosphorylation is the addition of a phosphate group to a protein or other organic molecule. Phosphorylation activates or deactivates many protein enzymes....
. Individual proteins can participate in the formation of a variety of different protein complexes. Different complexes perform different functions, and the same complex can perform very different functions that depend on a variety of factors. Some of these factors are:

The molecular structure
Molecular structure
The molecular structure of a substance is described by the combination of nuclei and electrons that comprise its constitute molecules. This includes the molecular geometry , the electronic properties of the...
of protein complexes can be determined by experimental techniques such as X-ray crystallography
X-ray crystallography
X-ray crystallography is a method of determining the arrangement of atoms within a crystal, in which a beam of X-rays strikes a crystal and causes the beam of light to spread into many specific directions. From the angles and intensities of these diffracted beams, a crystallographer can produce a...
or nuclear magnetic resonance
Nuclear magnetic resonance
Nuclear magnetic resonance is a physical phenomenon in which magnetic nuclei in a magnetic field absorb and re-emit electromagnetic radiation...
. Increasingly the theoretical option of protein–protein docking is also becoming available. One method that is commonly used for identifying the members of protein complexes is immunoprecipitation
Immunoprecipitation
Immunoprecipitation is the technique of precipitating a protein antigen out of solution using an antibody that specifically binds to that particular protein. This process can be used to isolate and concentrate a particular protein from a sample containing many thousands of different proteins...
.

The voltage-gated potassium channels in the plasma membrane of a neuron are heteromultimeric proteins composed of four of forty known alpha subunits. Subunits must be of the same subfamily to form the multimeric protein channel. The tertiary structure of the channel allows ions to flow through the hydrophobic plasma membrane. Connexons are an example of a homomultimeric protein composed of six identical connexins. A cluster of connexons forms the gap-junction in two neurons that transmit signals through an electrical synapse.
The source of this article is wikipedia, the free encyclopedia.  The text of this article is licensed under the GFDL.