Encyclopedia
Prosperous is a village in north County Kildare
County Kildare
County Kildare is a county in Ireland. It is part of the Mid-East Region and is also located in the province of Leinster. It is named after the town of Kildare. Kildare County Council is the local authority for the county...
, Ireland
Republic of Ireland
Ireland , described as the Republic of Ireland , is a sovereign state in Europe occupying approximately five-sixths of the island of the same name. Its capital is Dublin. Ireland, which had a population of 4.58 million in 2011, is a constitutional republic governed as a parliamentary democracy,...
. It is within the townland
Townland
A townland or bally is a small geographical division of land used in Ireland. The townland system is of Gaelic origin—most townlands are believed to pre-date the Norman invasion and most have names derived from the Irish language...
of Curryhills, at the junction of the R403
R403 road
The R403 road is a regional road in Ireland, linking the N4 at Lucan in County Dublin to Carbury in County Kildare.It starts, heading west, at a roundabout on the Leixlip Road and crosses the M4 motorway past Weston Airport and into County Kildare.It follows the Dublin Road to Celbridge where it...
and R408 regional road
Regional road
A regional road in Ireland is a class of road not forming a major route , but nevertheless forming a link in the national route network. There are over 11,600 kilometres of regional roads. Regional roads are numbered with three digit route numbers, prefixed by "R" A regional road in Ireland is a...
s, about 40 km (24.9 mi) from Dublin. Its population of 1,939 (2006 Census) makes it the 14th largest town in County Kildare.

The english name of Prosperous was given when the village was founded in the late 18th century. The village takes its Irish name from the townland lying to the East, Corrchoill or an Chorrchoill (meaning "the smooth forest"), anglicised variously as Corr[y]hill[s], Curr[i]hill[s] and Curryhills.. The village extends into the surrounding townlands of Ballynafagh, Killybegs, Curryhills and Downings (N,S,E,W respectively).

The town of Prosperous owes its origin to the vision and ideals of Robert Brooke (East India Company officer) . The late eighteenth century was a time of attempted industrial development in Ireland and the industry upon which Prosperous was founded in 1780 was cotton manufacturing. The name chosen by Brook for his industrial town could only be the product of a confident dream. A close parallel to the development of Prosperous was Stratford-on-Slaney
Stratford-on-Slaney
Stratford-on-Slaney , also known as Stratford or Stratford-upon-Slaney, is a small village on the River Slaney in West Wicklow in Ireland....
in Co. Wicklow, founded by Henry Stratford, Earl of Aldeborough in 1785 as a textile centre. Despite huge investment and, in the case of Prosperous, much building and an initial population of 4,000, both industrial ventures were failures. Stratford practically disappeared and Prosperous declined to such an extent as to be described by Lewis in 1837 as ‘little more than a pile of ruins' situated 'in a low marshy spot, surrounded by bogs and without water of importance nor reasonable hope of its revival' and more recently as a ‘straggling village labouring under its resounding name'.

A number of ráths
Ringfort
Ringforts are circular fortified settlements that were mostly built during the Iron Age , although some were built as late as the Early Middle Ages . They are found in Northern Europe, especially in Ireland...
have survived in the Prosperous area, indicating settlement of the place in early Christian
Christian
A Christian is a person who adheres to Christianity, an Abrahamic, monotheistic religion based on the life and teachings of Jesus of Nazareth as recorded in the Canonical gospels and the letters of the New Testament...
times. Time has not been kind to these ancient fortifications although in the case of one, it has been preserved as the centre-piece of a housing development; Rath View. There is a fort, or rath, just outside Prosperous on the eastern side of The Blackstick (R409 road
R409 road
The R409 road is a regional road in Ireland that passes through the village of Caragh in County Kildare. It starts at Naas and travels north-west through Caragh village, passes Mondello Park race-track and ends at the intersection with the R403 road. The route is long.-References:* – Department of...
to Caragh
Caragh
Caragh or Carragh is a village in County Kildare, Ireland. It is located on the R409 regional road between the River Liffey and the Grand Canal approximately 4 km north-west of Naas...
).

It is possible that the townland of Downings takes its name from the word "Dún
Dun
Dun is now used both as a generic term for a fort and also for a specific variety of Atlantic roundhouse...
", the Irish for ‘fort', although questionable - given the higher proliferation of raths in many other parts of Ireland. Another explanation is that the local population used to converge at the nearby church on Sunday or in Irish Dé Domhnaigh dʲeː ˈd̪ˠaun̪ˠiː - a closer phonetic match. Some confusion arises after the late 1990s when a housing development in the village was named The Downings.

Downings graveyard and church ruins, in the townland of Downings North - north of the R403
R403 road
The R403 road is a regional road in Ireland, linking the N4 at Lucan in County Dublin to Carbury in County Kildare.It starts, heading west, at a roundabout on the Leixlip Road and crosses the M4 motorway past Weston Airport and into County Kildare.It follows the Dublin Road to Celbridge where it...
to Allenwood
Allenwood
Allenwood is a small Irish village in County Kildare situated on the Grand Canal. Allenwood is located about from Dublin and half way between Rathangan and Clane in North County Kildare....
, mark the place of the first Christian church in the area. Tradition states that the church occupies the site of the cell of St. Farnan whose feast is celebrated on the 15th of February. Nearby is the well of St. Farnan which is said to have been blessed by the Saint, giving it the valuable property that those who drink of its water never after have any relish for intoxicating drink. The old parish in this area was known as Downings. It was joined to the parish of Caragh in the eighteenth century.

There is another ruined church surrounded by a graveyard at Killybegs. The Knights Hospitaller of St. John of Jerusalem
Knights Hospitaller
The Sovereign Military Hospitaller Order of Saint John of Jerusalem of Rhodes and of Malta , also known as the Sovereign Military Order of Malta , Order of Malta or Knights of Malta, is a Roman Catholic lay religious order, traditionally of military, chivalrous, noble nature. It is the world's...
had a Commandery here but very little is known about it. A lease of 1538 refers to the priory and this points to its foundation before that date. The octagonal baptismal font with its carving of an angel, which is now at Prosperous church, came from Killybegs.

During penal times there was a Mass-house in the townsland of Goatstown which is north of the Grand Canal
Grand Canal of Ireland
The Grand Canal is the southernmost of a pair of canals that connect Dublin, in the east of Ireland, with the River Shannon in the west,via Tullamore and a number of other villages and towns, the two canals nearly encircling Dublin's inner city. Its sister canal on the Northside of Dublin is the...
. When the town of Prosperous was built, a Catholic church was erected near the cross-roads close to the present Drama Hall. This church was replaced by the present limestone church in 1869. 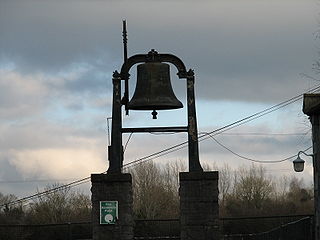 The ruin of the town was accelerated by the Rising of 1798
Irish Rebellion of 1798
The Irish Rebellion of 1798 , also known as the United Irishmen Rebellion , was an uprising in 1798, lasting several months, against British rule in Ireland...
. Prosperous was one of the first places where the United Irishmen rose. In the early morning of 24 May 1798, a large group of rebels attacked the crown forces in the town. One of the buildings holding over 50 men, including the leader, Captain Swayne, was burned. Oral tradition relates that the rebels were assisted by Ruth Hackett in the burning of the barracks. She is featured on the 1798 monument in the village square. The rebels held Prosperous until the crown forces recaptured it on the 19th of June. The troops were under the command of Colonel Stewart who boasted of destroying "this receptacle of rebellion". He said that the soldiers found drums with the inscription "Prosperous Strength Exists in Unity and Liberty".

Despite the disappearance of all of the industrial buildings several of the houses of 1780 have survived along the broad Main Street with its two squares. These add great charm to the historic core of the village centre. This, along with development along the main road, has effectively created a village in two sections. The main road through Prosperous is the R403
R403 road
The R403 road is a regional road in Ireland, linking the N4 at Lucan in County Dublin to Carbury in County Kildare.It starts, heading west, at a roundabout on the Leixlip Road and crosses the M4 motorway past Weston Airport and into County Kildare.It follows the Dublin Road to Celbridge where it...
and the village is within 20 km (12.4 mi) of both the M4 (to the north) and M7 (to the south) motorways. Prosperous Main Street however, runs perpendicular to the R403.

The village today meets the educational, shopping, social and community needs of the people of the surrounding area. It is now developing as a residential centre serving the present-day industrial development of northern Kildare and the growing city of Dublin.

Dramatic Society
Theatrical productions in the Drama Theatre, the Parish Centre. Check in local papers for details of the various performances. The group are always looking for new members. To become a member, pay the small membership fee to the treasurer.

Pitch and Putt
Situated in the community field beside the Church. Has its own parking facilities complete with club house.

Christy's golf society is based in Christy's Public House. It has a large and varied membership of locals and non locals who all frequent the pub. It was founded in 1995. Outings are once a month.

G.A.A.
The local Gaelic Football team is Caragh G.F.C.
Caragh GAA
Caragh is a Gaelic Athletic Association club in Prosperous, County Kildare, Republic of Ireland, winner of three county senior football championships and the only club to play in five successive county finals, club of the year 1978 and home club of Larry Stanley, All Ireland medalist in 1919,...
and the local Hurling team is Éire Óg/Chorr Choill
Raheens GAA
Raheens is a Gaelic Athletic Association club based in Caragh, County Kildare, Ireland, winner of the Leinster senior club championship in 1981, 10 county senior football championships, first winners of the Kildare club of the year in 1973 and winners again in 1976. The separate hurling club,...
.

In summer, a group of students from the Basque Country walks around the streets, and stays at local homes.

Prosperous is well served by Bus Éireann route 120 [Edenderry] as well as routes 121 [Tullamore] and 123 [Robertstown]. Busses to Dublin depart as frequently as every 15 minutes during peak commuter times.