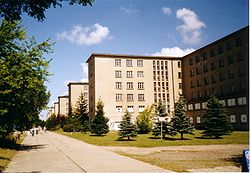 Prora is a beach resort on the island of Rügen
Rügen
Rügen is Germany's largest island. Located in the Baltic Sea, it is part of the Vorpommern-Rügen district of Mecklenburg-Vorpommern.- Geography :Rügen is located off the north-eastern coast of Germany in the Baltic Sea...
, Germany
Germany
Germany , officially the Federal Republic of Germany , is a federal parliamentary republic in Europe. The country consists of 16 states while the capital and largest city is Berlin. Germany covers an area of 357,021 km2 and has a largely temperate seasonal climate...
, known especially for its colossal Nazi-planned touristic structures. The massive building complex was built between 1936 and 1939 as a Kraft durch Freude
Kraft durch Freude
Kraft durch Freude was a large state-controlled leisure organization in Nazi Germany. It was a part of the German Labour Front , the national German labour organization at that time...
(KdF) project. The eight buildings are identical, and while they were planned as a holiday locale, they were never used for this purpose. The complex has a formal heritage listing as a particularly striking example of Third Reich architecture
Nazi architecture
Nazi architecture was an architectural plan which played a role in the Nazi party's plans to create a cultural and spiritual rebirth in Germany as part of the Third Reich....
.

Prora is an extensive bay between the Sassnitz
Sassnitz
Sassnitz is a town on the Jasmund peninsula, Rügen Island, in the Federal State of Mecklenburg-Vorpommern, Germany. The population as of 2007 was 10,747....
and Binz
Binz
Binz is the largest seaside resort on the German island of Rügen. It is situated between the Prorer Wiek and the Schmachter See in the south-east of the island. To the north of Binz stretches the Schmale Heide , a tongue of land which joins the Muttland region of Rügen to the Jasmund peninsula...
regions, near Prorer Wiek, on the narrow heath (called the Prora) which separates the Jasmunder Bodden from the Baltic Sea. The buildings extend over a length of 4.5 km and are roughly 150 m from the beach. The coast offers a long flat sand beach, which stretches from Binz to the Fährhafen. This beach was thus an ideal location for the establishment of a seaside resort.

Dr. Robert Ley
Robert Ley
Robert Ley was a Nazi politician and head of the German Labour Front from 1933 to 1945. He committed suicide while awaiting trial for war crimes.- Early life :...
envisioned Prora as a parallel to Butlins
Butlins
Butlins is a chain of large holiday camps in the United Kingdom. Butlins was founded by Billy Butlin to provide affordable holidays for ordinary British families....
- British "holiday camps" designed to provide affordable holidays for the average worker. Prora was designed to house 20,000 holidaymakers, under the ideal that every worker deserved a holiday at the beach. Designed by Clemens Klotz
Clemens Klotz
Clemens Klotz was one of Adolf Hitler's architects. After beginning his career focusing on residential designs in the Cologne area, Klotz received a series of prestigious commissions from the National Socialist Party's German Labor Front...
(1886-1969), all rooms were planned to overlook the sea, while corridors and sanitation are located on the land side. Each room of 5 by 2.5 metres (16'5" x 8'3") was to have two beds, an armoire (wardrobe) and a sink. There were communal toilets and showers and ballrooms on each floor.

Hitler's plans for Prora were much more ambitious. He wanted a gigantic sea resort, the "most mighty and large one to ever have existed", holding 20,000 beds. In the middle, a massive building was to be erected. At the same time, Hitler wanted it to be convertible into a military hospital in case of war. Hitler insisted that the plans of a massive indoor arena by architect Erich Putlitz be included. Putlitz's Festival Hall was intended to be able to accommodate all 20,000 guests at the same time. His plans included two wave-swimming pools and a theatre. A large dock for passenger ships was also planned.

In late 2008, plans were approved to have Prora fill its original purpose and to turn it into a modern tourist resort. The council set out plans to build enough living space to house 3000 people, as well as a youth hostel, and amenities for tourists. Kerstin Kassner, a local counciller, compared Prora's shore with a "Caribbean beach." However, the decision met with some skepticism from Binz locals, who felt that there were already too many tourists in the region, and Heike Tagsold, a Prora historian, who said that the town's past made it an inappropriate location for tourists. Nevertheless, in 2011 the largest youth hostel of Germany was opened in one of the blocks and enjoys great popularity. Possible expansion of the facility that is also available for budget tourists is envisioned. 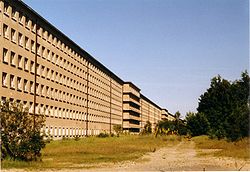 During the few years that Prora was under construction, all major construction companies of the Reich and nearly 9,000 workers were involved in this project. With the onset of World War II
World War II
World War II, or the Second World War , was a global conflict lasting from 1939 to 1945, involving most of the world's nations—including all of the great powers—eventually forming two opposing military alliances: the Allies and the Axis...
in 1939 construction on Prora stopped, and the construction workers transferred to the V-Weapons plant at Peenemünde
Peenemünde
The Peenemünde Army Research Center was founded in 1937 as one of five military proving grounds under the Army Weapons Office ....
. The eight housing blocks, the theatre and cinema stayed as empty shells, and the swimming pools and festival hall never materialised. During the Allied bombing campaign, many people from Hamburg
Hamburg
-History:The first historic name for the city was, according to Claudius Ptolemy's reports, Treva.But the city takes its modern name, Hamburg, from the first permanent building on the site, a castle whose construction was ordered by the Emperor Charlemagne in AD 808...
took refuge in one of the housing blocks, and later refugees from the east of Germany were housed there. By the end of the war, these buildings served to house female auxiliary personnel for the Luftwaffe
Luftwaffe
Luftwaffe is a generic German term for an air force. It is also the official name for two of the four historic German air forces, the Wehrmacht air arm founded in 1935 and disbanded in 1946; and the current Bundeswehr air arm founded in 1956....
.

In 1945 the Soviet Army
Soviet Army
The Soviet Army is the name given to the main part of the Armed Forces of the Soviet Union between 1946 and 1992. Previously, it had been known as the Red Army. Informally, Армия referred to all the MOD armed forces, except, in some cases, the Soviet Navy.This article covers the Soviet Ground...
took control of the region, and established a base at Prora. After the formation of the German Democratic Republic
German Democratic Republic
The German Democratic Republic , informally called East Germany by West Germany and other countries, was a socialist state established in 1949 in the Soviet zone of occupied Germany, including East Berlin of the Allied-occupied capital city...
(GDR) part of it was used as an army holiday centre, by the name of the "Walter Ulbricht
Walter Ulbricht
Walter Ulbricht was a German communist politician. As First Secretary of the Socialist Unity Party from 1950 to 1971 , he played a leading role in the creation of the Weimar-era Communist Party of Germany and later in the early development and...
Home". The sturdy but derelict shell of the complex remains as a tourist curiosity. After German reunification
German reunification
German reunification was the process in 1990 in which the German Democratic Republic joined the Federal Republic of Germany , and when Berlin reunited into a single city, as provided by its then Grundgesetz constitution Article 23. The start of this process is commonly referred by Germans as die...
, the National People's Army
National People's Army
The National People’s Army were the armed forces of the German Democratic Republic .The NVA was established in 1956 and disestablished in 1990. There were frequent reports of East German advisors with Communist African countries during the Cold War...
of GDR left the region, and it stood uninhabited until new plans were put in place. The buildings suffered heavy vandalism during this period.