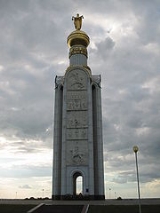 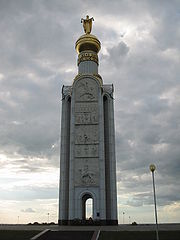 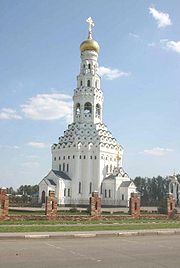 Prokhorovka is an urban locality (an urban-type settlement
Urban-type settlement
Urban-type settlement ; , selyshche mis'koho typu ) is an official designation for a type of locality used in some of the countries of the former Soviet Union...
) and the administrative center of Prokhorovsky District
Prokhorovsky District
Prokhorovsky District is an administrative district , one of the 21 in Belgorod Oblast, Russia. Municipally, it is incorporated as Prokhorovsky Municipal District. Its administrative center is the urban locality of Prokhorovka. Population: 31,847 ; Population of Prokhorovka accounts for 32.5%...
of Belgorod Oblast
Belgorod Oblast
Belgorod Oblast is a federal subjects of Russia . Its administrative center is the city of Belgorod. Population: 1,532,670 .-History:...
, Russia
Russia
Russia or , officially known as both Russia and the Russian Federation , is a country in northern Eurasia. It is a federal semi-presidential republic, comprising 83 federal subjects...
, located along the Psyol River southwest of the city of Kursk
Kursk
Kursk is a city and the administrative center of Kursk Oblast, Russia, located at the confluence of the Kur, Tuskar, and Seym Rivers. The area around Kursk was site of a turning point in the Russian-German struggle during World War II and the site of the largest tank battle in history...
. Population: