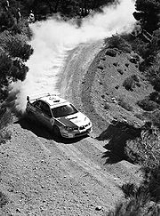 Encyclopedia
The FIA Production World Rally Championship, or PWRC, is a companion rally
Rallying
Rallying, also known as rally racing, is a form of auto racing that takes place on public or private roads with modified production or specially built road-legal cars...
series to the World Rally Championship
World Rally Championship
The World Rally Championship is a rallying series organised by the FIA, culminating with a champion driver and manufacturer. The driver's world championship and manufacturer's world championship are separate championships, but based on the same point system. The series currently consists of 13...
, and is driven on the same stages. PWRC is limited to production-based cars homologated under the Group N
Group N
In relation to motorsport governed by the FIA, Group N refers to a set of regulations providing 'standard' production vehicles for competition, often referred to as the "Showroom Class"....
. The series began in 2002, replacing the FIA Group N Rally Championship. The cars used were modified road cars, often based on turbocharged, four wheel drive versions of standard small cars such as the Subaru Impreza WRX
Subaru Impreza WRX
The Subaru Impreza WRX is a turbocharged version of the Subaru Impreza, an all-wheel drive, four-door passenger vehicle. It is available as a sedan or wagon....
and the Mitsubishi Lancer Evolution
Mitsubishi Lancer Evolution
The Mitsubishi Lancer Evolution, colloquially known as the Lancer Evo or Evo, is a high-performance sedan manufactured by Mitsubishi Motors. There have been ten official versions to date, and the designation of each model is most commonly a roman numeral...
, although a wide range of vehicles is homologated by the FIA for use in Group N. Apart from FIA sanctioned events, a lot of rallies at national levels are run under Group N. 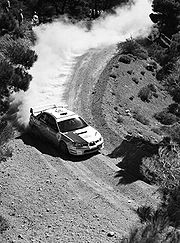