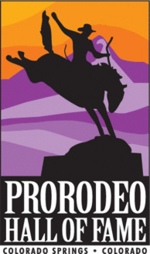 The ProRodeo Hall of Fame
Hall of Fame
A hall of fame, wall of fame, walk of fame, walk of stars or avenue of stars is a type of attraction established for any field of endeavor to honor individuals of noteworthy achievement in that field...
is dedicated to the preservation of rodeo
Rodeo
Rodeo is a competitive sport which arose out of the working practices of cattle herding in Spain, Mexico, and later the United States, Canada, South America and Australia. It was based on the skills required of the working vaqueros and later, cowboys, in what today is the western United States,...
artifacts and continued interest in the sport. It is located in Colorado Springs, Colorado
Colorado
Colorado is a U.S. state that encompasses much of the Rocky Mountains as well as the northeastern portion of the Colorado Plateau and the western edge of the Great Plains...
, and run by the Professional Rodeo Cowboys Association
Professional Rodeo Cowboys Association
The Professional Rodeo Cowboys Association is an organization whose members compete in rodeos throughout North America, primarily in the United States. The PRCA sanctions rodeo venues and events through the PRCA Circuit System. Its championship event is the Wrangler National Finals Rodeo...
's board. It claims to be the "only museum in the world devoted exclusively to the sport of rodeo."