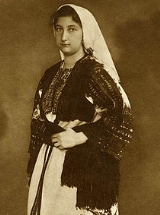 Encyclopedia
Princess Eudoxia Augusta Philippine Clementine Maria of Bulgaria (Sofia
Sofia
Sofia is the capital and largest city of Bulgaria and the 12th largest city in the European Union with a population of 1.27 million people. It is located in western Bulgaria, at the foot of Mount Vitosha and approximately at the centre of the Balkan Peninsula.Prehistoric settlements were excavated...
5 January 1898 – Württemberg
Württemberg
Württemberg , formerly known as Wirtemberg or Wurtemberg, is an area and a former state in southwestern Germany, including parts of the regions Swabia and Franconia....
4 October 1985) was the eldest daughter and third child of King Ferdinand of Bulgaria and his first wife Princess Marie Louise of Bourbon-Parma. She was a devoted sister and confidante to King Boris III.

Princess Eudoxia never married; although, there were persistent rumors that she wished to marry a man of Bulgarian descent which was dynasticly unacceptable at that time. She devoted her life to Bulgaria and acted as first lady of the land until King Boris III married Princess Giovanna of Savoy.