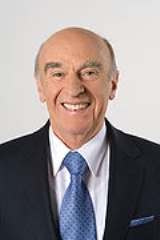 Encyclopedia
The President of the Confederation is the presiding member of the seven-member Swiss Federal Council
Swiss Federal Council
The Federal Council is the seven-member executive council which constitutes the federal government of Switzerland and serves as the Swiss collective head of state....
, Switzerland's executive
Executive (government)
Executive branch of Government is the part of government that has sole authority and responsibility for the daily administration of the state bureaucracy. The division of power into separate branches of government is central to the idea of the separation of powers.In many countries, the term...
. Elected by the Federal Assembly for one year, the President of the Confederation chairs the meetings of the Federal Council and undertakes special representational duties. Primus inter pares
Primus inter pares
Primus inter pares is Latin phrase describing the most senior person of a group sharing the same rank or office.When not used in reference to a specific title, it may indicate that the person so described is formally equal, but looked upon as an authority of special importance by their peers...
, the President has no powers above the other Councillors and continues to head his or her department
Ministry (government department)
A ministry is a specialised organisation responsible for a sector of government public administration, sometimes led by a minister or a senior public servant, that can have responsibility for one or more departments, agencies, bureaus, commissions or other smaller executive, advisory, managerial or...
. Traditionally the duty rotates among the members in order of seniority and the previous year's Vice President becomes President.

As first among equals, the Federal Council member serving as President of the Confederation is not considered the Swiss head of State. Rather, the entire Federal Council is considered a collective Head of State
Head of State
A head of state is the individual that serves as the chief public representative of a monarchy, republic, federation, commonwealth or other kind of state. His or her role generally includes legitimizing the state and exercising the political powers, functions, and duties granted to the head of...
.

The constitutional provisions relating to the organisation of the Federal Government and Federal Administration are set out in section 1 of Chapter 3 of the Swiss Federal Constitution at articles 174 to 179. Article 176 specifically relates to the Presidency.

The Swiss President is not – as are, for example, the Presidents in Austria or Germany – the Head of State
Head of State
A head of state is the individual that serves as the chief public representative of a monarchy, republic, federation, commonwealth or other kind of state. His or her role generally includes legitimizing the state and exercising the political powers, functions, and duties granted to the head of...
of the country: the Swiss Federal Constitution
Swiss Federal Constitution
The Federal Constitution of 18 April 1999 is the third and current federal constitution of Switzerland. It establishes the Swiss Confederation as a federal republic of 26 cantons , contains a catalogue of individual and popular rights , delineates the responsibilities of the...
knows neither a Head of State nor a Head of Government. Both of these functions are administered by the Federal Council collectively. If a tied vote occurs in the council (which does not happen too often, the number of Federal Councellors being an odd number), the President, being its Chair, casts the deciding vote.

In addition to the control of his or her own Department, the President carries out some of the representative duties of a Head of State. At first this was only the case inside Switzerland, where the President gave speeches on the New Year and the Swiss National Holiday (1 August). More recently, added foreign visits means that the President also often travels abroad.

However, because the Swiss have no single Head of State, the country also carries out no state visits. When traveling abroad, the President does so only as an ordinary Minister of a government Department.

Visiting heads of state are received by the seven members of the Federal Council together, rather than by the President of the Confederation. Treaties are signed on behalf of the full Council, with all Federal Council members signing letters of credence and other documents of the kind.

The President is elected by the Federal Assembly from the Federal Council in each case for one year.

Since the twentieth century, the election has usually not been disputed. There is an unwritten rule that the member of the Federal Council who has not been Federal President the longest becomes President. Therefore every Federal Council member gets a turn at least once every seven years. The only question in the elections that provides some tension is the question of how many votes the person who is to be elected President receives. This is seen as a popularity test. In the 1970s and 1980s, 200 votes (of 246 possible) was seen as an excellent result, but in the current era of growing party-political conflicts, 180 votes are a respectable outcome.