The Constitution
Constitution of Azerbaijan
The Constitution of Azerbaijan was adopted on 12 November 1995 by popular referendum and amended on 24 August 2002. It carries the "highest legal force" in Azerbaijan as per article 147.-Preamble:...
states that the president will be the embodiment of executive power
Executive Power
Executive Power is Vince Flynn's fifth novel, and the fourth to feature Mitch Rapp, an American agent that works for the CIA as an operative for a covert counter terrorism unit called the "Orion Team."-Plot summary:...
, commander-in-chief
Commander-in-Chief
A commander-in-chief is the commander of a nation's military forces or significant element of those forces. In the latter case, the force element may be defined as those forces within a particular region or those forces which are associated by function. As a practical term it refers to the military...
, "representative of Azerbaijan in home
Domestic policy
Domestic policy, also known as public policy, presents decisions, laws, and programs made by the government which are directly related to all issues and activity within the country....
and foreign
Foreign policy
A country's foreign policy, also called the foreign relations policy, consists of self-interest strategies chosen by the state to safeguard its national interests and to achieve its goals within international relations milieu. The approaches are strategically employed to interact with other countries...
policies
Policy
A policy is typically described as a principle or rule to guide decisions and achieve rational outcome. The term is not normally used to denote what is actually done, this is normally referred to as either procedure or protocol...
", and that he "shall have the right of immunity [from prosecution]." The president rules through his office at Presidential Apparatus
Presidential Apparatus
The Office of Azerbaijan President is the executive administration of President of Azerbaijan. The office is in charge of realization of constitutional responsibilities of the President...
, consisting of a group of secretaries and departmental ministers. Additionally, there is a Cabinet of Ministers
Cabinet of Azerbaijan
The Cabinet of Azerbaijan is the chief executive body of the Republic of Azerbaijan.-The Executive Power:The President of the Republic of Azerbaijan is the head of state....
(regarding economic and social policy) and a Security Council (regarding foreign, military, and judicial matters).

Among the agencies directly subordinate to the President is the Special State Protection Service.


Presidents of the Republic of Azerbaijan (1991-Present)

For leaders before independence, see List of leaders of Azerbaijan


(at time of appointment) 1 Ayaz Mütallibov
Ayaz Mütallibov
Ayaz Niyazi oğlu Mütallibov was the last leader of Soviet Azerbaijan, and the first President of independent Azerbaijan from October 1991 till May 1992.-Biography:...
30 August 1991 6 March 1992 Independent — Yaqub Mammadov
Yaqub Mammadov
Yaqub Javad oglu Mammadov , also spelled as Yagub Mammadov, was the Acting President of Azerbaijan from March 6 to May 14 and from May 18 to May 19, 1992. Mammadov is currently an opposition politician, professor and scientist.-Early life:... 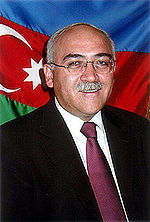 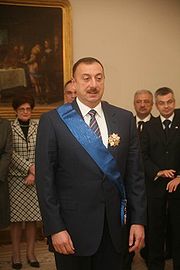