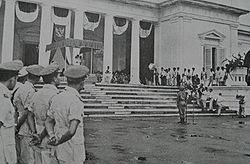 The Presidential Decree of 5 July 1959 was issued by President Sukarno
Sukarno
Sukarno, born Kusno Sosrodihardjo was the first President of Indonesia.Sukarno was the leader of his country's struggle for independence from the Netherlands and was Indonesia's first President from 1945 to 1967...
in the face of the inability of the Constitutional Assembly of Indonesia to achieve the two-thirds majority to reimpose the 1945 Constitution
Constitution of Indonesia
The Constitution of Indonesia is the basis for the government of the Indonesia.The constitution was written in June, July and August 1945, when Indonesia was emerging from Japanese control at the end of World War II...
. It was army chief of staff Abdul Haris Nasution
Abdul Haris Nasution
In this Indonesian name, the name "Nasution" is a family name, and the person should be referred to by the family name "Nasution".Abdul Haris Nasution was an Indonesian general who was twice appointed Army Chief of Staff and who escaped an assassination attempt during the...
who concluded that this would be the only way to bring about the reintroduction of a constitution that paved the way for the military to play a greater role in the running of the state.

The decree, which was read by Sukarno at the Merdeka Palace reads as follows:

That with the declaration of the majority of the members of the Session to Produce a Constitution to no longer attend sessions, it is no longer possible for the Constitutional Assembly to complete the task entrusted to it by the people;

That this has resulted in a situation that endangers the unity and security of the Nation, Land and People, as well as hampering overall development toward a just and prosperous society;

That with the support of the majority of the Indonesian people and urged on by our own certainty, we are forced to follow the only path to save the Proclaimed Nation:

That we are certain that the Jakarta Charter dated 22 July 1945 inspires the 1945 Constitution and is part of the chain of unity with the aforementioned Constitution.

Therefore, based on the above,

Resolve the dissolution of the Constituent Assembly

Establish a Provisional People's Consultative Assembly, which is made up of the members of the House of Representatives with the delegates from the regions and groups, with the establishment of a Provisional Supreme Advisory Council to be organized as speedily as possible.

In the name of the People of Indonesia