Can anyone provide the exact date of the General Assembly in 1894(or tell me where I might look it up? Thanks
More

Presbyterianism
Presbyterianism
Presbyterianism refers to a number of Christian churches adhering to the Calvinist theological tradition within Protestantism, which are organized according to a characteristic Presbyterian polity. Presbyterian theology typically emphasizes the sovereignty of God, the authority of the Scriptures,...
in Ireland
Ireland
Ireland is an island to the northwest of continental Europe. It is the third-largest island in Europe and the twentieth-largest island on Earth...
dates from the time of the Plantation of Ulster
Plantation of Ulster
The Plantation of Ulster was the organised colonisation of Ulster—a province of Ireland—by people from Great Britain. Private plantation by wealthy landowners began in 1606, while official plantation controlled by King James I of England and VI of Scotland began in 1609...
in 1610. During the reign of James I of England
James I of England
James VI and I was King of Scots as James VI from 24 July 1567 and King of England and Ireland as James I from the union of the English and Scottish crowns on 24 March 1603...
(James VI of Scotland) a large number of Scottish
Scotland
Scotland is a country that is part of the United Kingdom. Occupying the northern third of the island of Great Britain, it shares a border with England to the south and is bounded by the North Sea to the east, the Atlantic Ocean to the north and west, and the North Channel and Irish Sea to the...
Presbyterians emigrated to Ireland. The first move away from the Church of Scotland
Church of Scotland
The Church of Scotland, known informally by its Scots language name, the Kirk, is a Presbyterian church, decisively shaped by the Scottish Reformation....
, of which the Presbyterians in Ireland were part, saw the creation of the Presbytery of Ulster in 1642 by chaplains of a Scottish army which had arrived to crush the rising of 1641. Under Cromwell
Oliver Cromwell
Oliver Cromwell was an English military and political leader who overthrew the English monarchy and temporarily turned England into a republican Commonwealth, and served as Lord Protector of England, Scotland, and Ireland....
congregations multiplied and new presbyteries were formed. After the Restoration, nonconforming ministers were removed from parishes of the Established Church, but the Irish administration could not afford to alienate such a substantial Protestant population and Presbyterianism was allowed to continue in the country, with the stipends of ministers paid through the regium donum - literally 'the King's gift'.

William III
William III of England
William III & II was a sovereign Prince of Orange of the House of Orange-Nassau by birth. From 1672 he governed as Stadtholder William III of Orange over Holland, Zeeland, Utrecht, Guelders, and Overijssel of the Dutch Republic. From 1689 he reigned as William III over England and Ireland...
rewarded Presbyterian support against James II
James II of England
James II & VII was King of England and King of Ireland as James II and King of Scotland as James VII, from 6 February 1685. He was the last Catholic monarch to reign over the Kingdoms of England, Scotland, and Ireland...
(James VII of Scotland) with an increase in the regium donum. From the 1690s, Presbyterian congregations, now organised in the Synod of Ulster
Ulster
Ulster is one of the four provinces of Ireland, located in the north of the island. In ancient Ireland, it was one of the fifths ruled by a "king of over-kings" . Following the Norman invasion of Ireland, the ancient kingdoms were shired into a number of counties for administrative and judicial...
, enjoyed practical freedom of religion, confirmed by the Toleration Act of 1719. However, their members remained very conscious both of continuing legal disabilities under the penal laws
Penal Laws (Ireland)
The term Penal Laws in Ireland were a series of laws imposed under English and later British rule that sought to discriminate against Roman Catholics and Protestant dissenters in favour of members of the established Church of Ireland....
and of economic hardship as many were tenant farmers and objected to the payment of tithes to support the Church of Ireland
Church of Ireland
The Church of Ireland is an autonomous province of the Anglican Communion. The church operates in all parts of Ireland and is the second largest religious body on the island after the Roman Catholic Church...
. Throughout the eighteenth century, many Presbyterians were involved in movements for reform, which culminated with their prominent involvement in the United Irishmen.

In the nineteenth century, a belief that some of those who did not subscribe to the Westminster Confession were in fact Arian
Arianism
Arianism is the theological teaching attributed to Arius , a Christian presbyter from Alexandria, Egypt, concerning the relationship of the entities of the Trinity and the precise nature of the Son of God as being a subordinate entity to God the Father...
provoked a new phase of the conflict. This ended when seventeen ministers opposed to subscription seceded with their congregations to form the Remonstrant Synod. This led to the restoration of obligatory subscription to the Westminster Confession within the Synod of Ulster and facilitated union with the Seceders in 1840 to create the General Assembly of the Presbyterian Church in Ireland. The united church was active in missionary activity both at home and abroad, particularly benefitting from the evangelical Ulster Revival of 1859.

The PCI is involved in education, evangelism, social service and mission in a number of areas around the world; 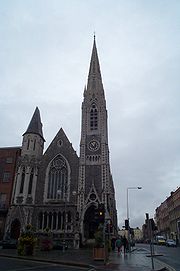 Apart from the seats for worshippers (not shown above), the inside of the church is dominated by four items of furniture.

The Word of God
Bible
The Bible refers to any one of the collections of the primary religious texts of Judaism and Christianity. There is no common version of the Bible, as the individual books , their contents and their order vary among denominations...
is central in the Presbyterian Church, along with Prayer and Praise. The worship is a mix of prayers
Prayers
is an anime set in the year 2014 where the young of Japan have rebelled against the government for segregating Shibuya and declared themselves to be independent of Japan...
, hymns, psalms
Psalms
The Book of Psalms , commonly referred to simply as Psalms, is a book of the Hebrew Bible and the Christian Bible...
, paraphrases
Paraphrases
Within a Presbyterian Hymnbook, the Paraphrases are usually printed in a separate section from Psalms and Hymns. Within the Church Hymnary Revised Edition of the Presbyterian Hymnbook there are 67 Paraphrases...
, Scripture readings and sermons. In recent years, psalms and paraphrases have been used less but are still an important part of worship. The order of service varies from church to church but it generally involves a hymn, followed by a prayer, followed by a children's address and a children's hymn. This is then followed by an expository sermon by the minister and another hymn, then another prayer and a closing hymn. Many Presbyterian churches mix Psalms and formal hymns with choruses, suitable for children, and many churches now have praise bands with a variety of instruments, as well as the traditional organ.

The motto of the Presbyterian Church in Ireland is "Ardens sed Virens" - "burning but flourishing". It is usually seen alongside the Burning Bush, the church's symbol. A burning bush was included in the more modern logo (top).

Main article : Burning Bush
Burning bush
The burning bush is an object described by the Book of Exodus as being located on Mount Sinai; according to the narrative, the bush was on fire, but was not consumed by the flames, hence the name...


According to the Bible
Bible
The Bible refers to any one of the collections of the primary religious texts of Judaism and Christianity. There is no common version of the Bible, as the individual books , their contents and their order vary among denominations...
, in Exodus 3:2, Moses
Moses
Moses was, according to the Hebrew Bible and Qur'an, a religious leader, lawgiver and prophet, to whom the authorship of the Torah is traditionally attributed...
heard the voice of God
God
God is the English name given to a singular being in theistic and deistic religions who is either the sole deity in monotheism, or a single deity in polytheism....
coming from a burning bush that was not consumed by fire
Fire
Fire is the rapid oxidation of a material in the chemical process of combustion, releasing heat, light, and various reaction products. Slower oxidative processes like rusting or digestion are not included by this definition....
. This occurred after he had to flee Egypt
Egypt
Egypt , officially the Arab Republic of Egypt, Arabic: , is a country mainly in North Africa, with the Sinai Peninsula forming a land bridge in Southwest Asia. Egypt is thus a transcontinental country, and a major power in Africa, the Mediterranean Basin, the Middle East and the Muslim world...
, and was when he was called to go and demand the release of the Israelites.


Bodies to which the PCI is affiliated

Other Presbyterian denominations in Ireland