Encyclopedia
Prasād is a mental condition of generosity, as well as a material substance that is first offered to a deity (in Hinduism
Hinduism
Hinduism is the predominant and indigenous religious tradition of the Indian Subcontinent. Hinduism is known to its followers as , amongst many other expressions...
) and then consumed. 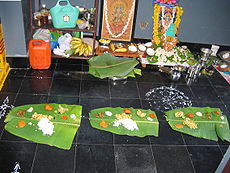 Literally, a gracious gift. Anything, usually edible, given by a saint, Perfect Master or the Avatar to their followers. Anything, usually edible, that is first offered to a deity, saint, Perfect Master or the Avatar and then distributed in His name. The prasad has the deity's blessing residing within it. In contemporary Hindu
Hindu
Hindu refers to an identity associated with the philosophical, religious and cultural systems that are indigenous to the Indian subcontinent. As used in the Constitution of India, the word "Hindu" is also attributed to all persons professing any Indian religion...
religious practice in India, the desire to get prasada and have darshan
Darshan
or Darshan is a Sanskrit term meaning "sight" , vision, apparition, or glimpse. It is most commonly used for "visions of the divine" in Hindu worship, e.g. of a deity , or a very holy person or artifact...
are the two major motivations of pilgrimage and temple visits. 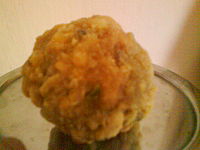 As a mental condition, prasāda has a rich history of meanings in the Sanskrit tradition from Vedic
Vedas
The Vedas are a large body of texts originating in ancient India. Composed in Vedic Sanskrit, the texts constitute the oldest layer of Sanskrit literature and the oldest scriptures of Hinduism....
literature onwards. In this textual tradition, prasada is a mental state experienced by gods, sages, and other powerful beings which is marked by spontaneous generosity and the bestowing of boons. Prasāda is understood in this sense of a mental state from the earliest literature (Rig Veda) onwards—not as an aspect of ritual practice. In later texts such as the Shiva Purāna
Shiva Purana
The Shiva Purana is one of the s, a genre of Hindu religious texts dedicated to Shiva. According to a tradition which is stated in the of this text, the original text was known as the ....
, references to prasada as a material substance begins to appear alongside this older meaning.

In its material sense, prasada is created by a process of giving and receiving between a human devotee and the divine god. For example, a devotee makes an offering of a material substance such as flowers, fruits, or sweets—which is called naivedya. The deity then 'enjoys' or tastes a bit of the offering, which is then temporarily known as bhogya
Bhog
Bhog is a term used in Hinduism and Sikhism.-In Hinduism:Bhog in the Hindu religion is a ritual of sacrifice to the Gods.-In Sikhism:...
. This now-divinely invested substance is called prasāda, and is received by the devotee to be ingested, worn, etc. It may be the same material that was originally offered, or material offered by others and then re-distributed to other devotees. In many temples, several kinds of prasada (e.g. nuts, sweets) are distributed to the devotees.

Some strict Gaudiya Vaishnavas
Gaudiya Vaishnavism
Gaudiya Vaishnavism is a Vaishnava religious movement founded by Chaitanya Mahaprabhu in India in the 16th century. "Gaudiya" refers to the Gauḍa region with Vaishnavism meaning "the worship of Vishnu"...
, most commonly initiated ISKCON devotees, will eat only prasada, i.e. everything they eat is first offered to Lord Krishna, not simply a few items like most other Hindus do. Their beliefs proscribe offering non-vegetarian items as well as onions, garlic and mushrooms to Krishna. In addition, the cooking of prasada is done not for their own consumption, but to offer to Krishna - they will receive the remnants of Krishna's food (which they consider to be non-different to Krishna). ISKCON temples are known for providing free prasada meals to all who come, as they believe that this is not only feeding the poor but providing them with Krishna's mercy as well.