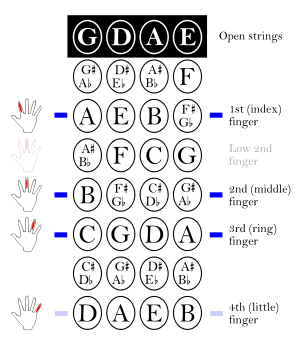 On a string instrument
String instrument
A string instrument is a musical instrument that produces sound by means of vibrating strings. In the Hornbostel-Sachs scheme of musical instrument classification, used in organology, they are called chordophones...
, position is the relative location of the hand on the instrument's neck
Neck (music)
The neck is the part of certain string instruments that projects from the main body and is the base of the fingerboard, where the fingers are placed to stop the strings at different pitches. Guitars, lutes, the violin family, and the mandolin family are examples of instruments which have necks.The...
, indicated by ordinal numbers
Ordinal number (linguistics)
In linguistics, ordinal numbers are the words representing the rank of a number with respect to some order, in particular order or position . Its use may refer to size, importance, chronology, etc...
(e.g., 3rd). Fingering, independent of position, is indicated by numbers, 1-4, and string is indicated by roman numerals, I-IV. Different positions on the same string are reached through shifting
Shift (string technique)
On a string instrument, shifting, or a shift, is a movement of the fingers of the left hand from one position to another on the same string. Position is indicated through ordinal numbers . Strings may be indicated through roman numerals, I-IV, and fingering may be indicated through numbers, 1-4...
.

With experience, string players become accustomed to the required shape and position of the left hand. Some positions are located relative to certain touch references, or landmarks on the instrument. For example, fourth position on the cello (used in the example below) has the player's thumb resting in the "saddle" of the neck root. Similarly, higher positions on the violin make use of the instrument's "shoulder" (treble-side edge of the top's upper bout) as a touch reference. Some electric string instruments, without a traditionally shaped body, still incorporate a reference feature imitating that shoulder's shape.

The pedal tone
Pedal tone
Pedal tones are special notes in the harmonic series of cylindrical-bore brass instruments. A pedal tone has the pitch of its harmonic series' fundamental tone. Its name comes from the pedals of a pipe-organ. Cylindrical brasses do not naturally vibrate at this frequency.A closed cylinder...
on B is frequently seen in commercial scoring but much less often in symphonic music while notes below that are called for only rarely as they, "become increasingly difficult to produce and insecure in quality" with A or G being the bottom limit for most trombonists.
As with all brass instruments, progressive tightening of the lips and increased air pressure allow the player to move to a different partial
Partial
Partial may refer to:*partial derivative, in mathematics** ∂, the partial derivative symbol, often read as "partial"*partial function, in mathematics*partial algorithm, in computer science*part score, in contract bridge...
in the harmonic series
Harmonic series (music)
Pitched musical instruments are often based on an approximate harmonic oscillator such as a string or a column of air, which oscillates at numerous frequencies simultaneously. At these resonant frequencies, waves travel in both directions along the string or air column, reinforcing and canceling...
. In the first or closed position on a B trombone, the notes in the harmonic series begin with B2 (one octave higher than the pedal B1), F3 (a perfect fifth higher than the previous partial), B3 (a perfect fourth higher), D4 (a major third higher), F4 (a minor third higher), A4 (a minor third higher than the previous partial; this tone (the "seventh partial (sixth overtone)") is always 31 cents, about one sixth of a tone, flat of the twelve-tone equal temperament minor seventh, "however it can be brought into tune by an adjustment of the slide," it may be avoided and played in an alternate position, though it has been the practice in Germany and Austria to play the note in position, see harmonic seventh
Harmonic seventh
The harmonic seventh interval , also known as the septimal minor seventh, or subminor seventh, is one with an exact 7:4 ratio . This is somewhat narrower than and is "sweeter in quality" than an "ordinary" minor seventh, which has a just-intonation ratio of 9:5 , or an equal-temperament ratio of...
and just intonation
Just intonation
In music, just intonation is any musical tuning in which the frequencies of notes are related by ratios of small whole numbers. Any interval tuned in this way is called a just interval. The two notes in any just interval are members of the same harmonic series...
), B4 (a major second higher), C5 (a major second higher), D5 (a major second higher), E♭ (a minor second higher, but almost exactly a quarter tone
Quarter tone
A quarter tone , is a pitch halfway between the usual notes of a chromatic scale, an interval about half as wide as a semitone, which is half a whole tone....
higher than it would be in twelve-tone equal temperament), F5 (a major second higher). Very skilled players with a highly developed facial musculature can go even higher than this, to G5, A5, B5 and beyond.
In the lower range, significant movement of the slide is required between positions, which becomes more exaggerated on lower pitched trombones, but for higher notes the player need only use the first four positions of the slide since the partials are closer together, allowing higher notes to be played in alternate positions. As an example, F4 (at the bottom of the treble clef) may be played in first, fourth or sixth position on a B trombone. The note E1 (or the lowest E on a standard 88-key piano keyboard) is the lowest attainable note on a 9' B tenor trombone, requiring a full 2.24 m of tubing. On trombones without an F attachment, there is a gap between B1 (the fundamental in first position) and E2 (the first harmonic in seventh position). Skilled players can produce so-called "falset
Falset (Music)
Falset is the latitude for a brasswind player's pitch-control of a harmonic. While only just sufficient in middle and high registers to allow for intonation adjustment, this latitude becomes very wide in the low register in the flattening direction; indeed, without this, the conventional system of...
" notes between these, but the sound is relatively weak and not usually used in performance.
Joseph Fröhlich was, in 1811, the first to describe the modern system of seven chromatic slide positions rather than four diatonic ones, and a tenor trombone in B rather than A. For ease of comparison (for example, in the old system contemporary 1st-position was considered "drawn past" then current 1st), the following chart may be helpful: