Encyclopedia
Position in poker
Poker
Poker is a family of card games that share betting rules and usually hand rankings. Poker games differ in how the cards are dealt, how hands may be formed, whether the high or low hand wins the pot in a showdown , limits on bet sizes, and how many rounds of betting are allowed.In most modern poker...
refers to the order in which players are seated around the table and the related poker strategy
Poker strategy
Poker is a popular card game that combines elements of chance and strategy. There are various styles of poker, all of which share an objective of presenting the least probable or highest-scoring hand. A poker hand is a configuration of five cards, either held entirely by a player or drawn partly...
implications. Players who act first are in "early position"; players who act later are in "late position". A player "has position" on opponents acting before him and is "out of position" to opponents acting after him. Because players act in clockwise order, a player "has position" on opponents seated to his right, except when the opponent has the button
Button (poker)
In poker, the buck or dealer button is a marker used to indicate the player who is dealing or, in casino games with a house dealer, the player who acts last on that deal...
and certain cases in the first betting round of games with blinds.

The primary advantage held by a player in late position is that he will have more information with which to make better decisions than players in early position, who will have to act first, without the benefit of this extra information. Also, as earlier opponents fold, the probability
Poker probability
In poker, the probability of each type of 5-card hand can be computed by calculating the proportion of hands of that type among all possible hands.-Frequency of 5-card poker hands:...
of a hand being the best goes up as the number of opponents goes down.

The blinds are the least desirable position because you're forced to contribute to the pot and you must act first on all betting rounds after the flop. Although the big blind has a big advantage on the first round of betting, it is on average the biggest money losing position. 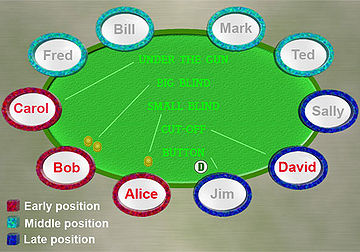 There are 10 players playing $4/$8 fixed limit. Alice pays the $2 small blind. Bob pays the $4 big blind. Carol is under the gun (first to act). If Carol has a hand like K♥ J♠, she may choose to fold. With 9 opponents remaining to act, there is approximately a 40% chance that at least one of them will have a better hand than Carol's like A-A, K-K, Q-Q, J-J, A-K, A-Q, A-J or K-Q. And even if no one does, seven of them (all but the two players in the blind) will have position on Carol in the next three betting rounds.

Now instead, suppose David in the cut-off position (to the right of the button) has the same K♥ J♠ and all players fold to him. In this situation, there are only three opponents left to act, so the odds that one of them has a better hand are considerably less (only around 16%). Secondly, two of those three (Alice and Bob) will be out of position to David on later betting rounds. A common play would be for David to raise and hope that the button (the only player who has position on David) folds. David's raise might simply steal the blinds if they don't have playable hands, but if they do play, David will be in good shape to take advantage of his position in later betting rounds.