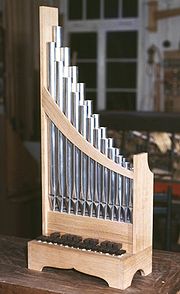 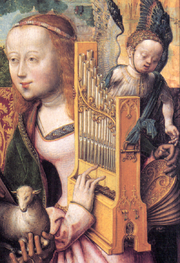 A portative organ (from the Latin verb portare, "to carry") is a small pipe organ
Pipe organ
The pipe organ is a musical instrument that produces sound by driving pressurized air through pipes selected via a keyboard. Because each organ pipe produces a single pitch, the pipes are provided in sets called ranks, each of which has a common timbre and volume throughout the keyboard compass...
that consists of one rank of flue pipe
Flue pipe
A flue pipe is an organ pipe that produces sound through the vibration of air molecules, in the same manner as a recorder or a whistle. Air under pressure is driven down a flue and against a sharp lip called a Labium, causing the column of air in the pipe to resonate at a frequency determined by...
s, sometimes arranged in two rows, to be played while strapped to the performer at a right angle. The performer manipulates the bellows
Bellows
A bellows is a device for delivering pressurized air in a controlled quantity to a controlled location.Basically, a bellows is a deformable container which has an outlet nozzle. When the volume of the bellows is decreased, the air escapes through the outlet...
with one hand and fingers the keys with the other. The portative organ lacks a reservoir to retain a supply of wind, thus it will only produce sound while the bellows are being operated. The instrument was commonly used in secular music from the twelfth to the sixteenth centuries.

The portative is constructed simply in order to make it as portable as possible. The pipes are arranged on a small rectangular windchest and supplied with wind by one or two bellows placed at the back, in front or at the right side of the instrument. The row of pipes is supported by posts at either end and an oblique bar. The simplest style of keyboard
Musical keyboard
A musical keyboard is the set of adjacent depressible levers or keys on a musical instrument, particularly the piano. Keyboards typically contain keys for playing the twelve notes of the Western musical scale, with a combination of larger, longer keys and smaller, shorter keys that repeats at the...
on the portative consists of one slider for each pipe. When a slider is pushed in, the corresponding pipe sounds. The slider is restored to its normal position by a horn spring. Some instruments use the reverse of this action, with keys featuring knobs or handles.

In principle, the portative is a smaller instrument than the positive organ
Positive organ
A positive organ is a small, usually one-manual, pipe organ that is built to be more or less mobile. It was common in sacred and secular music between the 10th and the 18th centuries, in chapels and small churches, as a chamber organ and for the basso continuo in ensemble works...
, which features more ranks of pipes and a larger keyboard. The portative also should not be confused with the regal
Regal (musical instrument)
The regal was a small portable organ, furnished with beating reeds and having two bellows. The instrument enjoyed its greatest popularity during the Renaissance. The name was also sometimes given to the reed stops of a pipe organ, and more especially the vox humana stop.The sound of the regal was...
, a small keyboard instrument that contains a rank of short-length reed pipe
Reed pipe
A reed pipe is an organ pipe that is sounded by a vibrating brass strip known as a reed. Air under pressure is directed towards the reed, which vibrates at a specific pitch. This is in contrast to flue pipes, which contain no moving parts and produce sound solely through the vibration of air...
s instead of flue pipes.

In practice, however, since the Orgelbewegung revival of small organs, also small positives with a bass register and played with both hands have come to be called portatives, especially when their pipe arrangement or general layout resembles that of the genuine portative. One of the most well-known modern proponents of that kind of 'large portative' organ was Dolly Collins
Dolly Collins
Dorothy Ann Collins, known as Dolly Collins , was an English folk musician, arranger and composer. She was the older sister of Shirley Collins....
, who accompanied her vocalist sister Shirley Collins
Shirley Collins
Shirley Elizabeth Collins MBE is a British folksinger who was a significant contributor to the English Folk Revival of the 1960s and 1970s...
on many albums of traditional English folk songs.

Towards the middle of the thirteenth century, miniatures of illuminated manuscripts
Miniature (illuminated manuscript)
The word miniature, derived from the Latin minium, red lead, is a picture in an ancient or medieval illuminated manuscript; the simple decoration of the early codices having been miniated or delineated with that pigment...
depict portatives with modern, balanced-action keyboards. An example can be seen in the Spanish manuscript known as the Cantigas de Santa Maria
Cantigas de Santa Maria
The Cantigas de Santa Maria are 420 poems with musical notation, written in Galician-Portuguese during the reign of Alfonso X El Sabio and often attributed to him....
, which contains fifty-one miniatures of instrumentalists. It is evident from the position of the organist's thumb in these miniatures that the keys are pressed down to make the notes sound. There are nine pipes and nine keys, which is sufficient for a C-major diatonic scale of one octave with an added B-flat.