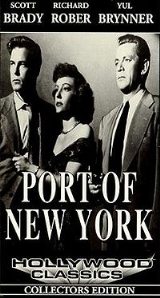 Encyclopedia
Port of New York is a 1949
1949 in film
The year 1949 in film involved some significant events.-Top grossing films :- Awards :Academy Awards:*Abbott and Costello Meet the Killer, Boris Karloff, starring Bud Abbott and Lou Costello...
film shot in semidocumentary
Semidocumentary
Semidocumentary is a form of book, film, or television program presenting a fictional story that incorporates many factual details or actual events, or which is presented in a manner similar to a documentary...
style. The film is notable for being Yul Brynner
Yul Brynner
Yul Brynner was a Russian-born actor of stage and film. He was best known for his portrayal of Mongkut, king of Siam, in the Rodgers and Hammerstein musical The King and I, for which he won an Academy Award for Best Actor for the film version; he also played the role more than 4,500 times on...
's first movie. He had not begun shaving his hair yet. The film, which is very similar to T-Men
T-Men
T-Men is a semidocumentary style 1947 film noir shot in black-and-white. The film was directed by Anthony Mann with cinematography by noted noir cameraman John Alton....
(1947), was shot on location in New York City
New York City
New York is the most populous city in the United States and the center of the New York Metropolitan Area, one of the most populous metropolitan areas in the world. New York exerts a significant impact upon global commerce, finance, media, art, fashion, research, technology, education, and...
. The movie was directed by László Benedek
László Benedek
László Benedek, sometimes credited as Laslo Benedek , was a Hungarian-born film director.- Biography :Born in Budapest, he worked as a writer and editor in Hungarian cinema until World War II. Louis B...
with cinematography
Cinematography
Cinematography is the making of lighting and camera choices when recording photographic images for cinema. It is closely related to the art of still photography...
by George E. Diskant
George E. Diskant
George E. Diskant was a film and television cinematographer. After working as an assistant on a number of films in the early thirties, Diskant graduated to first camera. Early jobs include a pair of Leon Errol shorts; Banjo, a dog story; and Anthony Mann's Desperate...
.

The film tells the story of a two federal agents, one from Customs and one from Narcotics
Federal Bureau of Narcotics
The Federal Bureau of Narcotics was an agency of the United States Department of the Treasury. Established in the Department of the Treasury by an act of June 14, 1930 consolidating the functions of the Federal Narcotics Control Board and the Narcotic Division...
, out to stop the distribution of opium that came in on a ship in the Port of New York
New York Harbor
New York Harbor refers to the waterways of the estuary near the mouth of the Hudson River that empty into New York Bay. It is one of the largest natural harbors in the world. Although the U.S. Board of Geographic Names does not use the term, New York Harbor has important historical, governmental,...
but was smuggled off by drug dealers. The leader of the drug dealers is the suave Vicola (Brynner).