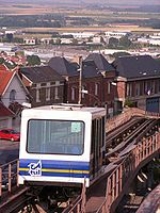 Encyclopedia
The Poma 2000 in Laon
Laon
Laon is the capital city of the Aisne department in Picardy in northern France.-History:The hilly district of Laon, which rises a hundred metres above the otherwise flat Picardy plain, has always held strategic importance...
, France
France
The French Republic , The French Republic , The French Republic , (commonly known as France , is a unitary semi-presidential republic in Western Europe with several overseas territories and islands located on other continents and in the Indian, Pacific, and Atlantic oceans. Metropolitan France...
, is an automated guideway transit, a cable-driven
Cable car (railway)
A cable car or cable railway is a mass transit system using rail cars that are hauled by a continuously moving cable running at a constant speed. Individual cars stop and start by releasing and gripping this cable as required...
people mover
People mover
A people mover or automated people mover is a fully automated, grade-separated mass transit system.The term is generally used only to describe systems serving relatively small areas such as airports, downtown districts or theme parks, but is sometimes applied to considerably more complex automated...
which runs between the railway station and the city hall (1.5 km, max. gradient 13%, descending 100 m).

There are three stations. Opened in 1989 replacing a former rack rail
Rack railway
A rack-and-pinion railway is a railway with a toothed rack rail, usually between the running rails. The trains are fitted with one or more cog wheels or pinions that mesh with this rack rail...
tram
Tram
A tram is a passenger rail vehicle which runs on tracks along public urban streets and also sometimes on separate rights of way. It may also run between cities and/or towns , and/or partially grade separated even in the cities...
line (1899–1971), it runs on rubber tyres
Rubber-tyred metro
A rubber-tyred metro is a form of rapid transit system that uses a mix of road and rail technology. The vehicles have wheels with rubber tyres which run on rolling pads inside guide bars for traction, as well as traditional railway steel wheels with deep flanges on steel tracks for guidance through...
on a metallic track at a 2.5 min headway. Four vehicles are used by the system, and each of them can carry 33 passengers at a maximum speed of 35 km/h. The maximum capacity is 900 passengers/hour, and the current ridership is about 2500 passengers/day.

The system runs every day from 7:00 a.m. to 8:00 p.m. from Monday to Saturday and every day in Summer. Going from the station Gare to the station Hôtel de Ville takes 3.5 min. 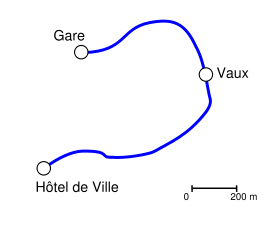