Encyclopedia
The pollen tubes is the male gametophyte
Gametophyte
A gametophyte is the haploid, multicellular phase of plants and algae that undergo alternation of generations, with each of its cells containing only a single set of chromosomes....
of seed plants that acts as a conduit to transport the male sperm cells from the pollen grain, either from the stigma (in flowering plants or angiosperms) to the ovules at the base of the pistil, or directly through ovule tissue in some gymnosperms (conifers and gnetophytes).

After pollination
Pollination
Pollination is the process by which pollen is transferred in plants, thereby enabling fertilisation and sexual reproduction. Pollen grains transport the male gametes to where the female gamete are contained within the carpel; in gymnosperms the pollen is directly applied to the ovule itself...
, the pollen tube germinates from the pollen grain and grows the entire length through the stigma
Stigma (botany)
The stigma is the receptive tip of a carpel, or of several fused carpels, in the gynoecium of a flower. The stigma receives pollen at pollination and it is on the stigma that the pollen grain germinates. The stigma is adapted to catch and trap pollen with various hairs, flaps, or sculpturings...
, style, ovary and ovules to reach the egg cell. In maize
Maize
Maize known in many English-speaking countries as corn or mielie/mealie, is a grain domesticated by indigenous peoples in Mesoamerica in prehistoric times. The leafy stalk produces ears which contain seeds called kernels. Though technically a grain, maize kernels are used in cooking as a vegetable...
, this single cell can grow longer than 12 inches to traverse the length of the pistil. The sperm cells are not motile, so they are carried within the tube. As the tip of the tube reaches the egg cell, it bursts and releases two sperm cells leading to a double fertilization. 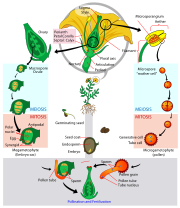 Seed plants reproduction is a complex process that includes several steps that may vary among species. Each step is a vast procedure in his own right, but in general, the reproduction cycle of angiosperms starts with the production of pollen by the stamen
Stamen
The stamen is the pollen producing reproductive organ of a flower...
, the male reproductive organ. Each pollen grain contains a vegetative cell, and a generative cell that divides to form two sperm cells: the male gametes. The pollen is delivered by the opening of anthers for subsequent pollination, that is, for the transfer of pollen grains to the pistil, the female reproductive organ. Pollination is usually carried out by wind, water or insects. The ovaries, on the other hand, hold the ovules that produce the female gamete: the egg cell, which waits in place for fertilisation
Fertilisation
Fertilisation is the fusion of gametes to produce a new organism. In animals, the process involves the fusion of an ovum with a sperm, which eventually leads to the development of an embryo...
.

Once a pollen grain settles on a compatible pistil, it germinates in response to a sugary fluid secreted by the mature stigma. Lipid
Lipid
Lipids constitute a broad group of naturally occurring molecules that include fats, waxes, sterols, fat-soluble vitamins , monoglycerides, diglycerides, triglycerides, phospholipids, and others...
s at the surface of the stigma stimulate pollen tube growth for compatible pollen. Plants that are self-sterile inhibit the pollen grains from their own flowers from growing pollen tubes. The presence of multiple grains of pollen has been observed to stimulate quicker pollen tube growth in some plants. The vegetative cell then produces the pollen tube, a tubular protrusion from the pollen grain, which carries the sperm cells within its cytoplasm. This tube is the transportation medium of the male gamete to reach the egg cell.

The germinated pollen tube must then drill its way through the nutrient-rich style and curl to the bottom of the ovary to reach the ovule. Once the pollen tube successfully attains an ovule, it delivers the two sperm cells with a burst. One of them fertilizes the female gamete (the egg cell) to form an embryo, which will become the future plant. And the other one fuses with both polar nuclei of the central cell to form the endosperm
Endosperm
Endosperm is the tissue produced inside the seeds of most flowering plants around the time of fertilization. It surrounds the embryo and provides nutrition in the form of starch, though it can also contain oils and protein. This makes endosperm an important source of nutrition in human diet...
, which serves as the embryo's food supply. The endosperm is rich in starch, proteins and oils and is a major source of human food (e.g., wheat, barley, rye, oats, corn). Finally, the ovary will develop into a fruit and the ovules will develop into seeds.

Cell biology is fundamental to all life sciences. Advancement in knowledge of cell physiology enables the improvement of life quality and the development of methodologies for prevention or treatment of many disorders and diseases in areas such as medicine, agriculture, among others. Pollen tubes are an excellent model for the understanding of plant cell behavior. They are easily cultivated in vitro
In vitro
In vitro refers to studies in experimental biology that are conducted using components of an organism that have been isolated from their usual biological context in order to permit a more detailed or more convenient analysis than can be done with whole organisms. Colloquially, these experiments...
and have a very dynamic cytoskeleton
Cytoskeleton
The cytoskeleton is a cellular "scaffolding" or "skeleton" contained within a cell's cytoplasm and is made out of protein. The cytoskeleton is present in all cells; it was once thought to be unique to eukaryotes, but recent research has identified the prokaryotic cytoskeleton...
that polymerizes at very high rates, providing the pollen tube with interesting mechanical properties. For instance, the pollen tube has an unusual kind of growth; it extends exclusively at its apex. Extending the cell wall only at the tip minimizes friction between the tube and the invaded tissue. This tip growth is actually performed in a pulsating manner rather than in a steady fashion. Remarkably, the pollen tube’s journey through the style often results in depth-to-diameter ratios above 100:1 and up to 1000:1 in certain species, whereas classic mechanical drilling is often only effective up to 15:1 ratios. However, the internal machinery and the external interactions that govern the dynamics of pollen tube growth are far from being fully understood.

Extensive work has been dedicated to comprehend how the pollen tube responds to extracellular guidance signals to achieve fertilization. It is believed that pollen tubes react to a combination of chemical, electrical, and mechanical cues during its journey through the pistil. However, it is not clear how these external cues work or how they are processed internally. Moreover, sensory receptors for any external cue have not been identified yet. Nevertheless, several aspects have already been identified as central in the process of pollen tube growth. The actin filaments in the cytoskeleton, the peculiar cell wall
Cell wall
The cell wall is the tough, usually flexible but sometimes fairly rigid layer that surrounds some types of cells. It is located outside the cell membrane and provides these cells with structural support and protection, and also acts as a filtering mechanism. A major function of the cell wall is to...
, secretory
Secretion
Secretion is the process of elaborating, releasing, and oozing chemicals, or a secreted chemical substance from a cell or gland. In contrast to excretion, the substance may have a certain function, rather than being a waste product...
vesicle
Vesicle
Vesicle may refer to:In cellular biology or chemistry* Vesicle , a supramolecular assembly of lipid molecules, like a cell membrane* Synaptic vesicleIn human embryology* Auditory vesicle* Optic vesiclesIn human anatomy and morphology...
dynamics, and the flux of ions, to name a few, are some of the fundamental features readily identified as crucial, but whose role has not yet been completely elucidated.