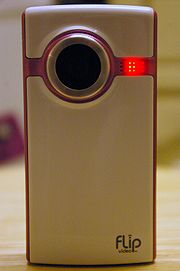 A pocket video camera is a tapeless camcorder
Tapeless Camcorder
A tapeless camcorder is a camcorder that does not use video tape for the digital recording of video productions as 20th century ones did. Tapeless camcorders record video as digital computer files onto random access data storage devices such as optical discs, hard disk drives and solid-state flash...
that is small enough to be carried in one's pocket. Most pocket video cameras resemble mobile phone
Mobile phone
A mobile phone is a device which can make and receive telephone calls over a radio link whilst moving around a wide geographic area. It does so by connecting to a cellular network provided by a mobile network operator...
s in shape and size, unlike traditional cameras.

A typical pocket video camera has an LCD screen
Liquid crystal display
A liquid crystal display is a flat panel display, electronic visual display, or video display that uses the light modulating properties of liquid crystals . LCs do not emit light directly....
of at least 1.5", the ability to capture High-definition video
High-definition video
High-definition video or HD video refers to any video system of higher resolution than standard-definition video, and most commonly involves display resolutions of 1,280×720 pixels or 1,920×1,080 pixels...
(H.264/MPEG-4 AVC
H.264/MPEG-4 AVC
H.264/MPEG-4 Part 10 or AVC is a standard for video compression, and is currently one of the most commonly used formats for the recording, compression, and distribution of high definition video...
) and standard video (or just standard video), at least 128MB of internal memory and a Secure Digital
Secure Digital
Secure Digital is a non-volatile memory card format developed by the SD Card Association for use in portable devices. The SD technology is used by more than 400 brands across dozens of product categories and more than 8,000 models, and is considered the de-facto industry standard.Secure Digital...
(SD) card extension or at least 4GB internal memory with no SD card slot. Power may be supplied by a proprietary Ni-MH rechargeable battery
Rechargeable battery
A rechargeable battery or storage battery is a group of one or more electrochemical cells. They are known as secondary cells because their electrochemical reactions are electrically reversible. Rechargeable batteries come in many different shapes and sizes, ranging anything from a button cell to...
or 2 standard AA batteries. Dimensions 2.5 x 4.5 x 0.9 in and a weight of 3.8 oz are typical, and a USB connector is usually built-in.

The idea came from camera phone
Camera phone
A camera phone is a mobile phone which is able to capture still photographs . Since early in the 21st century the majority of mobile phones in use are camera phones....
s or multimedia phones able to digitally record
Digital recording
In digital recording, digital audio and digital video is directly recorded to a storage device as a stream of discrete numbers, representing the changes in air pressure for audio and chroma and luminance values for video through time, thus making an abstract template for the original sound or...
anything at a moment's notice. Pocket camcorders weigh only from 0.2 to 0.4 lbs and fit neatly into any pocket or purse for ultra portability. Video quality is typically higher than for multimedia phones. Examples include the Creative Vado HD and the Flip Video
Flip Video
The Flip Video camera is a tapeless camcorder for digital video created by Pure Digital Technologies, a company bought by Cisco Systems in March 2009...
. The Sony Bloggie MHS-PM5
Sony Bloggie MHS-PM5
The Sony Bloggie MHS-PM5 is an HD pocket video camera by Sony. The camera can record in 1920x1080 , 1280x720 and 640x480 VGA. The camera uses H.264/MPEG-4 AVC video compression. The camera can also be used to take photos up to a resolution of 5 megapixels...
can shoot video in Full HD and has 4x digital zoom
Digital zoom
Digital zoom is a method of decreasing the apparent angle of view of a digital photographic or video image. Digital zoom is accomplished by cropping an image down to a centered area with the same aspect ratio as the original, and usually also interpolating the result back up to the pixel...
. The Sanyo Xacti PD1 can shoot video in Stereo Full HD 1080 30p and has 3x optical zoom.
The source of this article is wikipedia, the free encyclopedia.  The text of this article is licensed under the GFDL.