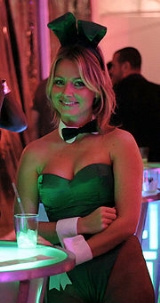 Overview
A Playboy Bunny is a waitress at the Playboy Club
Playboy Club
The Playboy Club initially was a chain of nightclubs and resorts owned and operated by Playboy Enterprises. The first club opened at 116 E. Walton Street in downtown Chicago, Illinois, United States, on February 29, 1960. Each club generally featured a Living Room, a Playmate Bar, a Dining Room...
. The Playboy Clubs were originally open from 1960 to 1988. The Club re-opened in one location in The Palms Hotel in Las Vegas in 2006. Bunnies wore a costume called a "bunny suit" inspired by the tuxedo-wearing Playboy rabbit mascot, consisting of a corset
Corset
A corset is a garment worn to hold and shape the torso into a desired shape for aesthetic or medical purposes...
, bunny ears, a collar
Collar (clothing)
In clothing, a collar is the part of a shirt, dress, coat or blouse that fastens around or frames the neck. Among clothing construction professionals, a collar is differentiated from other necklines such as revers and lapels, by being made from a separate piece of fabric, rather than a folded or...
, cuff
Cuff
A cuff is an extra layer of fabric at the lower edge of the sleeve of a garment covering the arms. In US usage the word may also refer to the end of the leg of a pair of trousers...
s and a fluffy cottontail.
According to Hugh Hefner
Hugh Hefner
Hugh Marston "Hef" Hefner is an American magazine publisher, founder and Chief Creative Officer of Playboy Enterprises.-Early life:...
, the Bunny was inspired by Bunny's Tavern in Urbana, Illinois
Urbana, Illinois
Urbana is the county seat of Champaign County, Illinois, United States. As of the 2010 census, the population was 41,250. Urbana is the tenth-most populous city in Illinois outside of the Chicago metropolitan area....
.

Bunny's Tavern was named for its original owner, Bernard "Bunny" Fitzsimmons, who opened for business in 1936.

I was wondering how much it would be to buy one of the original playboy cocktail costumes and where can I purchase one?
More
x