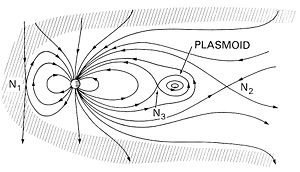 A plasmoid is a coherent structure of plasma
Plasma (physics)
In physics and chemistry, plasma is a state of matter similar to gas in which a certain portion of the particles are ionized. Heating a gas may ionize its molecules or atoms , thus turning it into a plasma, which contains charged particles: positive ions and negative electrons or ions...
and magnetic field
Magnetic field
A magnetic field is a mathematical description of the magnetic influence of electric currents and magnetic materials. The magnetic field at any given point is specified by both a direction and a magnitude ; as such it is a vector field.Technically, a magnetic field is a pseudo vector;...
s. Plasmoids have been proposed to explain natural phenomena such as ball lightning
Ball lightning
Ball lightning is an unexplained atmospheric electrical phenomenon. The term refers to reports of luminous, usually spherical objects which vary from pea-sized to several metres in diameter. It is usually associated with thunderstorms, but lasts considerably longer than the split-second flash of a...
, magnetic bubbles in the magnetosphere
Magnetosphere
A magnetosphere is formed when a stream of charged particles, such as the solar wind, interacts with and is deflected by the intrinsic magnetic field of a planet or similar body. Earth is surrounded by a magnetosphere, as are the other planets with intrinsic magnetic fields: Mercury, Jupiter,...
, and objects in cometary tails, in the solar wind, in the solar atmosphere, and in the heliospheric current sheet
Heliospheric current sheet
The heliospheric current sheet is the surface within the Solar System where the polarity of the Sun's magnetic field changes from north to south. This field extends throughout the Sun's equatorial plane in the heliosphere. The shape of the current sheet results from the influence of the Sun's...
. Plasmoids produced in the laboratory include Field-Reversed Configuration
Field-Reversed Configuration
A Field-Reversed Configuration is a device developed for magnetic fusion energy research that confines a plasma on closed magnetic field lines without a central penetration....
s, Spheromak
Spheromak
A spheromak is an arrangement of plasma formed into a toroidal shape similar to a smoke ring. The spheromak contains large internal electrical currents and their associated magnetic fields arranged so the magnetohydrodynamic forces within the spheromak are nearly balanced, resulting in long-lived ...
s, and the dense plasma focus
Dense plasma focus
A dense plasma focus is a machine that produces, by electromagnetic acceleration and compression, a short-lived plasma that is so hot and dense that it can cause nuclear fusion and emit X-rays. The electromagnetic compression of the plasma is called a pinch. It was invented in the early 1960s by...
.

The plasma is emitted not as an amorphous blob, but in the form of a torus
Torus
In geometry, a torus is a surface of revolution generated by revolving a circle in three dimensional space about an axis coplanar with the circle...
. We shall take the liberty of calling this toroidal structure a plasmoid, a word which means plasma-magnetic entity. The word plasmoid will be employed as a generic term for all plasma-magnetic entities.

Bostick went on to apply his theory of plasmoids to astrophysics
Astrophysics
Astrophysics is the branch of astronomy that deals with the physics of the universe, including the physical properties of celestial objects, as well as their interactions and behavior...
phenomena. His 1958 paper, applied plasma similarity transformations
Plasma scaling
The parameters of plasmas, including their spatial and temporal extent, vary by many orders of magnitude. Nevertheless, there are significant similarities in the behaviors of apparently disparate plasmas. Understanding the scaling of plasma behavior is of more than theoretical value...
to pairs of plasmoids fired from a plasma gun (dense plasma focus device) that interact in such a way as to simulate an early model of galaxy formation.