A pipette is a laboratory tool used to transport a measured volume of liquid.

Pipettes are commonly used in molecular biology
Molecular biology
Molecular biology is the branch of biology that deals with the molecular basis of biological activity. This field overlaps with other areas of biology and chemistry, particularly genetics and biochemistry...
, analytical chemistry
Analytical chemistry
Analytical chemistry is the study of the separation, identification, and quantification of the chemical components of natural and artificial materials. Qualitative analysis gives an indication of the identity of the chemical species in the sample and quantitative analysis determines the amount of...
as well as medical tests. Pipettes come in several designs for various purposes with differing levels of accuracy and precision
Accuracy and precision
In the fields of science, engineering, industry and statistics, the accuracy of a measurement system is the degree of closeness of measurements of a quantity to that quantity's actual value. The precision of a measurement system, also called reproducibility or repeatability, is the degree to which...
, from single piece glass pipettes to more complex adjustable or electronic pipettes. Many pipette types work by creating a partial vacuum
Vacuum
In everyday usage, vacuum is a volume of space that is essentially empty of matter, such that its gaseous pressure is much less than atmospheric pressure. The word comes from the Latin term for "empty". A perfect vacuum would be one with no particles in it at all, which is impossible to achieve in...
above the liquid-holding chamber and selectively releasing this vacuum to draw up and dispense.

Pipettes that dispense between 1 and 1000 μl are termed micropipette
Micropipette
A micropipette is one of two different instruments used in science laboratories.-History:The first micropipette was patented in 1960 by Dr Hanns Schmitz . The founder of the company Eppendorf, Dr...
s, while macropipettes dispense a greater volume of liquid. Two types of micropipettes are generally used: air-displacement pipettes and positive-displacement pipettes. In particular, piston-driven air-displacement pipettes are micropipettes which dispense an adjustable volume of liquid from a disposable tip. The pipette body contains a plunger, which provides the suction to pull liquid into the tip when the piston is compressed and released. The maximum displacement of the plunger is set by a dial on the pipette body, allowing the delivery volume to be changed.
Larger capacity tubular pipettes, such as volumetric or graduated pipettes, are used by temporarily attaching a pipetting dispenser.
Pipetting syringes typically handle volumes in the 0.5mL to 25mL range, for aliquot transfer and incremental dispensing in titrations, with a positive displacement method of operation. No disposable tips or pipetting aids are needed with the pipetting syringe. 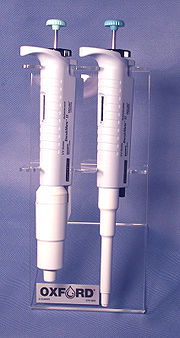 These pipettes operate by piston
Piston
A piston is a component of reciprocating engines, reciprocating pumps, gas compressors and pneumatic cylinders, among other similar mechanisms. It is the moving component that is contained by a cylinder and is made gas-tight by piston rings. In an engine, its purpose is to transfer force from...
-driven air displacement. A vacuum is generated by the vertical travel of a metal or ceramic piston within an airtight sleeve. As the piston moves upward, driven by the depression of the plunger, a vacuum is created in the space left vacant by the piston. Air from the tip rises to fill the space left vacant, and the tip air is then replaced by the liquid, which is drawn up into the tip and thus available for transport and dispensing elsewhere. These pipettes are capable of being very precise and accurate, however, being air displacement, are subject to inaccuracies caused by the changing environment, particularly temperature and user technique. For these reasons this equipment must be carefully maintained and calibrated, and users must be trained to exercise correct and consistent technique.
These micropipette were invented and patented 1960 by Dr. Hanns Schmitz (Marburg
Marburg
Marburg is a city in the state of Hesse, Germany, on the River Lahn. It is the main town of the Marburg-Biedenkopf district and its population, as of March 2010, was 79,911.- Founding and early history :...
/ Germany). Afterwards, the co-founder of the biotechnology company Eppendorf
Eppendorf (company)
Eppendorf is a provider of equipment for the field of biotechnology. The company develops, produces and distributes devices and systems for use in life science research laboratories worldwide....
, Dr. Heinrich Netheler, inherited the rights and initiated the global and general use of micropipettes in labs. In 1972, the adjustable micropipette was invented at the University of Wisconsin-Madison by several people, primarily Warren Gilson and Henry Lardy.

These are similar to air displacement pipettes, but are less commonly used and are used to avoid contamination and for volatile or viscous substances at small volumes, such as DNA. The major difference is that the disposable tip is a microsyringe (plastic), composed of a plunger which directly displaces the liquid.

Pipetting syringes combine the functions of volumetric (bulb) pipettes, graduated pipettes, and burettes
Burette
A burette is a vertical cylindrical piece of laboratory glassware with a volumetric graduation on its full length and a precision tap, or stopcock, on the bottom. It is used to dispense known amounts of a liquid reagent in experiments for which such precision is necessary, such as a titration...
into one hand-held device, being calibrated to ISO volumetric A grade standards. A glass or plastic pipette tube is provided with a thumb operated piston and PTFE seal which slides within the pipette in a positive displacement operation. This arrangement provides improvements in precision, handling safety, reliability, economy, and versatility with volumes between 0.5ml and 25ml.
The pipetting syringe is designed to handle all laboratory fluids - aqueous, viscous and volatile, hydrocarbons, essential oils, and mixtures - accurately and incrementally.

Pipette recalibration is one of the significant parts in maintaining high quality standards that every laboratory strives for. It is the act of examining or adjusting the quality of being near to the true value of a measuring device by comparison with a standard. Pipette calibration is essential to ensure that the instrument is working according to expectations and as per the defined regimes or work protocols. Pipette calibration is considered to be a complex affair because it includes many elements of calibration procedure and several calibration protocol options as well as makes and models of pipettes to consider.

Factors to consider while calibrating pipettes

There are numerous things to consider during pipette calibration, either if the laboratory performs the process themselves or if undertaken by a third party. It includes the following;

Non-piston-driven vacuum assisted pipettes are hollow narrow cylinders which work like a straw and require the use of some kind of additional suction device.
Originally pipettes were made of soda-lime glass, but currently many are made of borosilicate glass which is tougher and more chemically resistant. Disposable and single use pipettes are often made of polystyrene. All of these are commonly used in chemistry, mainly with aqueous solutions. There are two types. One type, the volumetric(or bulb)pipette, has generally a large bulge with a long narrow portion above with a single graduation mark as it is calibrated for a single volume. Typical volumes are 10, 25, and 50 mL. The second type, the graduated pipette, is straight-walled and as the name implies has graduation marks along most of its length.

The pipette is filled by dipping the tip in the fluid, then drawing up the liquid by using a pipette filler to create a partial vacuum above the fluid. The surface of the fluid inside the pipette is generally concave and this is called the fluid meniscus. The fluid level is read at the bottom of the meniscus and by aligning it with the graduation marks while holding the pipette at eye level. Liquid is dispensed by releasing the vacuum created by the pipette filler ; slow release for gradual dispensing and complete removal for fast dispensing. With safe fluids the finger may be used on the open end of the pipette to control the vacuum. While moving the pipette to the receiving vessel, care must be taken not to shake the pipette because the column of fluid may "bounce". Complete emptying of the pipette is accomplished by either blowing the pipette out with air from the filler (blow-out pipettes), or touching the tip against the side of the receiving vessel, according to pipette type.

Volumetric pipettes
Volumetric pipettes
A Volumetric pipette is a tool for measuring precise volumes of a liquid. Pipettes are typically long tubes, open on both ends, marked to contain a certain volume of liquid....
allow the user to measure a volume of solution extremely accurately and then add it to something else. They are commonly used to make laboratory solutions from a base stock as well as prepare solutions for titration
Titration
Titration, also known as titrimetry, is a common laboratory method of quantitative chemical analysis that is used to determine the unknown concentration of an identified analyte. Because volume measurements play a key role in titration, it is also known as volumetric analysis. A reagent, called the...
. They are typically marked to indicate one single volume in a particular size pipette (as are volumetric flasks). Many different sizes are available.

Various methods exist to handle the liquids inside a pipette. Before the advent of more sophisticated pipette dispensers, it was common practice to "mouth pipette" i.e. to aspirate fluid into the pipette by applying suction with one's mouth. Mouth pipetting is now considered unsafe due to the possibility of accidentally ingesting or inhaling toxic chemicals or pathogens. The main three types of pipette dispenser are the bulb filler, pipette pump and the electronic controller.


A commercial variant of the pasteur pipette is the dispensable pipettes which are often made of plastic and intended to be used to administer medicine into the eye or ear of a patient (see image).