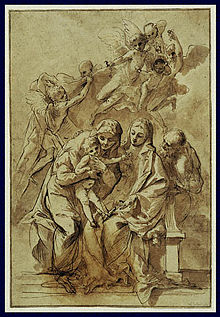 Pietro Testa was an Italian High Baroque
Baroque
The Baroque is a period and the style that used exaggerated motion and clear, easily interpreted detail to produce drama, tension, exuberance, and grandeur in sculpture, painting, literature, dance, and music...
artist, best known, both to his contemporaries and modern appreciation, as a printmaker and draftsman, who was active in Rome
Rome
Rome is the capital of Italy and the country's largest and most populated city and comune, with over 2.7 million residents in . The city is located in the central-western portion of the Italian Peninsula, on the Tiber River within the Lazio region of Italy.Rome's history spans two and a half...
.

Born in Lucca
Lucca
Lucca is a city and comune in Tuscany, central Italy, situated on the river Serchio in a fertile plainnear the Tyrrhenian Sea. It is the capital city of the Province of Lucca...
, thus sometimes called il Lucchesino. Testa moved to Rome early in life. One source states he was ejected from the Cortona
Pietro da Cortona
Pietro da Cortona, by the name of Pietro Berrettini, born Pietro Berrettini da Cortona, was the leading Italian Baroque painter of his time and also one of the key architects in the emergence of Roman Baroque architecture. He was also an important decorator...
studio in 1631, soon after joining the workshop. Others state Testa trained under Pietro Paolini
Pietro Paolini
Pietro Paolini was an Italian painter of the Baroque period. He is also called Paolino which is an affectionate diminutive of his lastname.He was born in Lucca, the son of Tommaso Paolini and Ginevra Raffaelli...
or under Domenichino and then Annibale Carracci
Annibale Carracci
Annibale Carracci was an Italian Baroque painter.-Early career:Annibale Carracci was born in Bologna, and in all likelihood first apprenticed within his family...
, for whom he worked under the patronage of Cassiano dal Pozzo
Cassiano dal Pozzo
Cassiano dal Pozzo was an Italian scholar and patron of arts. The secretary of Cardinal Francesco Barberini, he was an antiquary in the classicizing circle of Rome, and a long-term friend and patron of Nicolas Poussin, whom he supported from his earliest arrival in Rome: Poussin in a letter...
. He was friends with Nicolas Poussin
Nicolas Poussin
Nicolas Poussin was a French painter in the classical style. His work predominantly features clarity, logic, and order, and favors line over color. His work serves as an alternative to the dominant Baroque style of the 17th century...
and Francesco Mola.

Some of his etching
Etching
Etching is the process of using strong acid or mordant to cut into the unprotected parts of a metal surface to create a design in intaglio in the metal...
s, which often include work in drypoint
Drypoint
Drypoint is a printmaking technique of the intaglio family, in which an image is incised into a plate with a hard-pointed "needle" of sharp metal or diamond point. Traditionally the plate was copper, but now acetate, zinc, or plexiglas are also commonly used...
, have a fantastic quality reminiscent of Jacques Callot
Jacques Callot
Jacques Callot was a baroque printmaker and draftsman from the Duchy of Lorraine . He is an important figure in the development of the old master print...
, or embellishments of his Genoese contemporary Giovanni Benedetto Castiglione
Giovanni Benedetto Castiglione
Giovanni Benedetto Castiglione was an Italian Baroque artist, painter, printmaker and draftsman, of the Genoese school. He is best known now for his elaborate engravings, and as the inventor of the printmaking technique of monotyping. He was known as Il Grechetto in Italy and in France as Le...
and even presciently suggest William Blake
William Blake
William Blake was an English poet, painter, and printmaker. Largely unrecognised during his lifetime, Blake is now considered a seminal figure in the history of both the poetry and visual arts of the Romantic Age...
. His Sacrifice of Iphigenia appears to have influenced Tiepolo
Giovanni Battista Tiepolo
Giovanni Battista Tiepolo , also known as Gianbattista or Giambattista Tiepolo, was an Italian painter and printmaker from the Republic of Venice...
's rendition at Villa Valmarana in Vicenza
Vicenza
Vicenza , a city in north-eastern Italy, is the capital of the eponymous province in the Veneto region, at the northern base of the Monte Berico, straddling the Bacchiglione...
. His early prints, from the 1630s, were often religious and were influenced by Federico Barocci
Federico Barocci
Federico Barocci was an Italian Renaissance painter and printmaker. His original name was Federico Fiori, and he was nicknamed Il Baroccio, which still in northwestern Italian dialects means a two wheel cart drawn by oxen...
. These achieve very delicate effects of light; his later ones became harder and more austere in style, as he attempted a personal version of neo-classicism, under the influence of the Carracci. Many of his later subjects were original classical subjects, the most ambitious reflecting his personal struggles. His prints were successful and frequently copied.

Between 1638 and 1644, Testa completed what is perhaps his most important work, a set of complex and highly detailed etching
Etching
Etching is the process of using strong acid or mordant to cut into the unprotected parts of a metal surface to create a design in intaglio in the metal...
s on the theme of The Seasons, which served as an expression of his interest in Platonic philosophy. Sympathetic contemporaries considered these his "finest and most important works."

Testa was influenced by Leonardo da Vinci
Leonardo da Vinci
Leonardo di ser Piero da Vinci was an Italian Renaissance polymath: painter, sculptor, architect, musician, scientist, mathematician, engineer, inventor, anatomist, geologist, cartographer, botanist and writer whose genius, perhaps more than that of any other figure, epitomized the Renaissance...
to favor direct observation of natural phenomena, a fact that may have limited his productivity as an artist and might even have caused his death. Accounts of Testa's death are confused and contradictory, some suggesting murder or suicide (Testa was described as melancholic in temperament). Yet his earliest biographer, the 17th-century author Filippo Baldinucci
Filippo Baldinucci
Filippo Baldinucci was an Italian art historian and biographer.-Life:Baldinucci is considered among the most significant Florentine biographers/historians of the artists and the arts of the Baroque period...
, indicates that the death was accidental. Commenting on Testa's habit of "depicting night scenes and changes in the atmosphere and in the sky," Baldinucci states that Testa was standing on a Tiber
Tiber
The Tiber is the third-longest river in Italy, rising in the Apennine Mountains in Emilia-Romagna and flowing through Umbria and Lazio to the Tyrrhenian Sea. It drains a basin estimated at...
riverbank, "drawing and observing some reflections of the rainbow in the water," when he fell in and drowned.