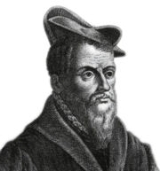 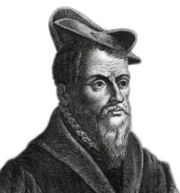 Pierre Belon was a French
France
The French Republic , The French Republic , The French Republic , (commonly known as France , is a unitary semi-presidential republic in Western Europe with several overseas territories and islands located on other continents and in the Indian, Pacific, and Atlantic oceans. Metropolitan France...
naturalist
Natural history
Natural history is the scientific research of plants or animals, leaning more towards observational rather than experimental methods of study, and encompasses more research published in magazines than in academic journals. Grouped among the natural sciences, natural history is the systematic study...
. He is sometimes known as Pierre Belon du Mans, or, in Latin translations of his works, as Petrus Bellonius Cenomanus.

Belon was born in 1517 at Soulletiere near Cérans-Foulletourte
Cérans-Foulletourte
Cérans-Foulletourte is a commune in the Sarthe department in the region of Pays-de-la-Loire in north-western France.-References:*...
. He studied medicine
Medicine
Medicine is the science and art of healing. It encompasses a variety of health care practices evolved to maintain and restore health by the prevention and treatment of illness....
at Paris
Paris
Paris is the capital and largest city in France, situated on the river Seine, in northern France, at the heart of the Île-de-France region...
, where he took the degree of doctor, and then became a pupil of the botanist Valerius Cordus (1515-1544) at Wittenberg, with whom he travelled in Germany
Germany
Germany , officially the Federal Republic of Germany , is a federal parliamentary republic in Europe. The country consists of 16 states while the capital and largest city is Berlin. Germany covers an area of 357,021 km2 and has a largely temperate seasonal climate...
.

On his return to France he was taken under the patronage of François de Tournon
François de Tournon
François de Tournon was a French Augustinian diplomat and Cardinal. From 1536 he was also a military leader of French forces operating in Provence, Savoy and Piedmont. In the same year he founded the Collège de Tournon. For a period he was effectively France's foreign minister.-External links:*...
, who furnished him with means for undertaking an extensive scientific journey. Starting in 1546, he travelled through Greece
Greece
Greece , officially the Hellenic Republic , and historically Hellas or the Republic of Greece in English, is a country in southeastern Europe....
, Asia Minor
Asia Minor
Asia Minor is a geographical location at the westernmost protrusion of Asia, also called Anatolia, and corresponds to the western two thirds of the Asian part of Turkey...
, Egypt
Egypt
Egypt , officially the Arab Republic of Egypt, Arabic: , is a country mainly in North Africa, with the Sinai Peninsula forming a land bridge in Southwest Asia. Egypt is thus a transcontinental country, and a major power in Africa, the Mediterranean Basin, the Middle East and the Muslim world...
, Arabia and Palestine
Palestine
Palestine is a conventional name, among others, used to describe the geographic region between the Mediterranean Sea and the Jordan River, and various adjoining lands....
, and returned in 1549. A full account of his Observations
Observations (Pierre Belon)
Les observations de plusieurs singularitez et choses memorables trouvées en Grèce, Asie, Judée, Egypte, Arabie et autres pays étrangèrs is a work of ethnographical, botanical and zoological exploration by Pierre Belon , a French naturalist from Le Mans...
on this journey, with illustrations, was published in 1553.

Belon, who was highly favored both by Henry II
Henry II of France
Henry II was King of France from 31 March 1547 until his death in 1559.-Early years:Henry was born in the royal Château de Saint-Germain-en-Laye, near Paris, the son of Francis I and Claude, Duchess of Brittany .His father was captured at the Battle of Pavia in 1525 by his sworn enemy,...
and by Charles IX
Charles IX of France
Charles IX was King of France, ruling from 1560 until his death. His reign was dominated by the Wars of Religion. He is best known as king at the time of the St. Bartholomew's Day Massacre.-Childhood:...
, was assassinated in Paris one evening in April 1564, when coming through the Bois de Boulogne
Bois de Boulogne
The Bois de Boulogne is a park located along the western edge of the 16th arrondissement of Paris, near the suburb of Boulogne-Billancourt and Neuilly-sur-Seine...
.

Besides the narrative of his travels he wrote several scientific works of considerable value, particularly the Histoire naturelle des estranges poissons (1551), De aquatilibus (1553), and L'Histoire de la nature des oyseaux (1555), which entitle him to be regarded as one of the first workers in the science of comparative anatomy
Comparative anatomy
Comparative anatomy is the study of similarities and differences in the anatomy of organisms. It is closely related to evolutionary biology and phylogeny .-Description:...
.