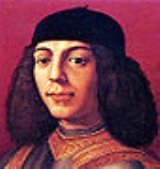 Encyclopedia
Piero de' Medici called Piero the Unfortunate, was the Gran maestro
Gran maestro
A Gran maestro was the unofficial head of state in the Italian city-states. The role could depend on holding a particular office, military power or a general subversion of the constitution....
of Florence
Florence
Florence is the capital city of the Italian region of Tuscany and of the province of Florence. It is the most populous city in Tuscany, with approximately 370,000 inhabitants, expanding to over 1.5 million in the metropolitan area....
from 1492 until his exile in 1494.

Born in Florence
Florence
Florence is the capital city of the Italian region of Tuscany and of the province of Florence. It is the most populous city in Tuscany, with approximately 370,000 inhabitants, expanding to over 1.5 million in the metropolitan area....
, Piero di Lorenzo de' Medici was the oldest son of Lorenzo de' Medici
Lorenzo de' Medici
Lorenzo de' Medici was an Italian statesman and de facto ruler of the Florentine Republic during the Italian Renaissance. Known as Lorenzo the Magnificent by contemporary Florentines, he was a diplomat, politician and patron of scholars, artists and poets...
(Lorenzo the Magnificent) and Clarice Orsini
Clarice Orsini
Clarice Orsini was the daughter of Jacopo Orsini, Lord of Monterotondo and Bracciano, and his wife and cousin Maddalena Orsini. Born in the Papal States, she is most known as the wife of Lorenzo de' Medici , de facto ruler of the Florentine Republic...
, and older brother of the future Pope Leo X
Pope Leo X
Pope Leo X , born Giovanni di Lorenzo de' Medici, was the Pope from 1513 to his death in 1521. He was the last non-priest to be elected Pope. He is known for granting indulgences for those who donated to reconstruct St. Peter's Basilica and his challenging of Martin Luther's 95 Theses...
.

He was educated to succeed his father as head of the Medici family and de facto
De facto
De facto is a Latin expression that means "concerning fact." In law, it often means "in practice but not necessarily ordained by law" or "in practice or actuality, but not officially established." It is commonly used in contrast to de jure when referring to matters of law, governance, or...
ruler of the Florentine state, under notable figures such as Angelo Poliziano. However, his feeble, arrogant and undisciplined character was to prove unsuited to such a role.

Piero took over as leader of Florence in 1492. After a brief period of relative calm, the fragile pacific equilibrium between the Italian states, laboriously constructed by Piero's father, collapsed in 1494 with the decision of King Charles VIII of France
Charles VIII of France
Charles VIII, called the Affable, , was King of France from 1483 to his death in 1498. Charles was a member of the House of Valois...
to cross the Alps
Alps
The Alps is one of the great mountain range systems of Europe, stretching from Austria and Slovenia in the east through Italy, Switzerland, Liechtenstein and Germany to France in the west....
with an army in order to take the Kingdom of Naples
Kingdom of Naples
The Kingdom of Naples, comprising the southern part of the Italian peninsula, was the remainder of the old Kingdom of Sicily after secession of the island of Sicily as a result of the Sicilian Vespers rebellion of 1282. Known to contemporaries as the Kingdom of Sicily, it is dubbed Kingdom of...
, claiming hereditary rights. Charles had been lured to Italy by Ludovico Sforza
Ludovico Sforza
Ludovico Sforza , was Duke of Milan from 1489 until his death. A member of the Sforza family, he was the fourth son of Francesco Sforza. He was famed as a patron of Leonardo da Vinci and other artists, and presided over the final and most productive stage of the Milanese Renaissance...
, (Ludovico il Moro), ex-Regent of Milan
Milan
Milan is the second-largest city in Italy and the capital city of the region of Lombardy and of the province of Milan. The city proper has a population of about 1.3 million, while its urban area, roughly coinciding with its administrative province and the bordering Province of Monza and Brianza ,...
, as a way to eject Ludovico's nephew Gian Galeazzo Sforza
Gian Galeazzo Sforza
Gian Galeazzo Sforza was the sixth Duke of Milan.Born in Abbiategrasso, he was only 7 years old when in 1476 his father, Galeazzo Maria Sforza, was assassinated and Gian Galeazzo became the Duke of Milan...
and replace him as Duke.

After settling matters in Milan, Charles moved towards Naples. He needed to pass through Tuscany
Tuscany
Tuscany is a region in Italy. It has an area of about 23,000 square kilometres and a population of about 3.75 million inhabitants. The regional capital is Florence ....
, as well as leave troops there, securing his lines of communication with Milan. Piero attempted to stay neutral, but this was unacceptable to Charles, who intended to invade Tuscany. Piero attempted to mount a resistance, but received little support from Florentine elites, who had fallen under the influence of the fanatical Dominican priest Girolamo Savonarola
Girolamo Savonarola
Girolamo Savonarola was an Italian Dominican friar, Scholastic, and an influential contributor to the politics of Florence from 1494 until his execution in 1498. He was known for his book burning, destruction of what he considered immoral art, and what he thought the Renaissance—which began in his...
; even his cousins defected to Charles's side.

Piero quickly gave up as Charles's army neared Florence and surrendered the chief fortresses of Tuscany to the invading army, giving Charles everything he demanded. His poor handling of the situation and failure to negotiate better terms led to an uproar in Florence, and the Medici family fled. The family palazzo
Palazzo
Palazzo, an Italian word meaning a large building , may refer to:-Buildings:*Palazzo, an Italian type of building**Palazzo style architecture, imitative of Italian palazzi...
was subsequently looted, and the substance as well as the form of the Republic of Florence
Republic of Florence
The Republic of Florence , or the Florentine Republic, was a city-state that was centered on the city of Florence, located in modern Tuscany, Italy. The republic was founded in 1115, when the Florentine people rebelled against the Margraviate of Tuscany upon Margravine Matilda's death. The...
was re-established, with the Medici formally exiled. A member of the Medici family was not to rule Florence again until 1512.

Piero and his family at first fled to Venice
Republic of Venice
The Republic of Venice or Venetian Republic was a state originating from the city of Venice in Northeastern Italy. It existed for over a millennium, from the late 7th century until 1797. It was formally known as the Most Serene Republic of Venice and is often referred to as La Serenissima, in...
with the aid of Philippe de Commines
Philippe de Commines
Philippe de Commines was a writer and diplomat in the courts of Burgundy and France. He has been called "the first truly modern writer" and "the first critical and philosophical historian since classical times"...
. In 1503 however, as the French and Spanish continued their struggle in Italy over the Kingdom of Naples
Kingdom of Naples
The Kingdom of Naples, comprising the southern part of the Italian peninsula, was the remainder of the old Kingdom of Sicily after secession of the island of Sicily as a result of the Sicilian Vespers rebellion of 1282. Known to contemporaries as the Kingdom of Sicily, it is dubbed Kingdom of...
, Piero was drowned in the Garigliano River
Garigliano River
The Garigliano is a river in central Italy.It forms at the confluence of the rivers Gari and Liri. Garigliano is actually a deformation of "Gari-Lirano"...
while attempting to flee the aftermath of the battle
Battle of Garigliano (1503)
The Battle of Garigliano was fought on December 29, 1503 between a Spanish army under Gonzalo Fernández de Córdoba and a French army commanded by Ludovico II, Marquis of Saluzzo.-Preliminary phase:...
, which the French (with whom he was allied) had lost.