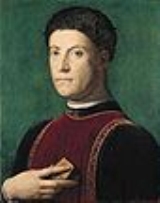 Encyclopedia
Piero di Cosimo de' Medici (the Gout
Gout
Gout is a medical condition usually characterized by recurrent attacks of acute inflammatory arthritis—a red, tender, hot, swollen joint. The metatarsal-phalangeal joint at the base of the big toe is the most commonly affected . However, it may also present as tophi, kidney stones, or urate...
y), (Italian: Piero "il Gottoso") (1416 – December 2, 1469), was the de facto ruler of Florence
Florence
Florence is the capital city of the Italian region of Tuscany and of the province of Florence. It is the most populous city in Tuscany, with approximately 370,000 inhabitants, expanding to over 1.5 million in the metropolitan area....
from 1464 to 1469, during the Italian Renaissance
Renaissance
The Renaissance was a cultural movement that spanned roughly the 14th to the 17th century, beginning in Italy in the Late Middle Ages and later spreading to the rest of Europe. The term is also used more loosely to refer to the historical era, but since the changes of the Renaissance were not...
. He was the father of Lorenzo the Magnificent
Lorenzo de' Medici
Lorenzo de' Medici was an Italian statesman and de facto ruler of the Florentine Republic during the Italian Renaissance. Known as Lorenzo the Magnificent by contemporary Florentines, he was a diplomat, politician and patron of scholars, artists and poets...
and Giuliano de' Medici
Giuliano di Piero de' Medici
Giuliano de' Medici was the second son of Piero de' Medici and Lucrezia Tornabuoni. As co-ruler of Florence, with his brother Lorenzo the Magnificent, he complemented his brother's image as the "patron of the arts" with his own image as the handsome, sporting, "golden boy."-Death:As the opening...

Piero was born in Florence
Florence
Florence is the capital city of the Italian region of Tuscany and of the province of Florence. It is the most populous city in Tuscany, with approximately 370,000 inhabitants, expanding to over 1.5 million in the metropolitan area....
, the son of Cosimo de' Medici
Cosimo de' Medici
Còsimo di Giovanni degli Mèdici was the first of the Medici political dynasty, de facto rulers of Florence during much of the Italian Renaissance; also known as "Cosimo 'the Elder'" and "Cosimo Pater Patriae" .-Biography:Born in Florence, Cosimo inherited both his wealth and his expertise in...
the Elder and Contessina de' Bardi
Contessina de' Bardi
Contessina de Bardi was born in about 1390 and died in Florence in October 1473.-Di Bardi Family:The family of Contessina de Bardi had been exceptionally rich for some time but, following the collapse of the family bank in 1343, its importance was considerably reduced. They enjoyed some fame as...
. In 1444 Piero married the wise, tolerant and cultured Lucrezia Tornabuoni
Lucrezia Tornabuoni
Lucrezia Tornabuoni was a daughter of Francesco di Simone Tornabuoni and Nanna di Niccolo di Luigi Guicciardini. Her brother was Giovanni Tornabuoni.- Biography :...
(1425–1482), a link to the old Florentine nobility. All his family is probably portrayed in the famous painting by Botticelli, called “Madonna del Magnificat”, where Lucrezia Tornabuoni appears as the Virgin Mary.

During his father's life he did not play an extensive role due to his perpetual poor health, the source of his nickname. His brother Giovanni was named as Cosimo's executor, but predeceased his father. In 1461, Piero was the last Medici
Medici
The House of Medici or Famiglia de' Medici was a political dynasty, banking family and later royal house that first began to gather prominence under Cosimo de' Medici in the Republic of Florence during the late 14th century. The family originated in the Mugello region of the Tuscan countryside,...
elected to the office of Gonfaloniere
Gonfaloniere of Justice
Gonfaloniere of Justice was a post in the government of medieval and early Renaissance Florence. Like Florence's Podestà and Priori, it was introduced in 1293 when Giano Della Bella's Ordinamenti di Giustizia came into force....
.

Upon taking over the family Medici bank
Medici bank
The Medici Bank was a financial institution created by the Medici family in Italy during the 15th century. It was the largest and most respected bank in Europe during its prime. There are some estimates that the Medici family was, for a period of time, the wealthiest family in Europe...
from his father, Piero had a financial overview prepared. The results led him to call up a number of long-standing loans, many to various Medici supporters, which his father had let stand. This immediately drove a good number of the merchants involved into bankruptcy, and added to the ranks of those who opposed the Medici.

His time as leader of Florence was marked by an attempted coup led by Luca Pitti
Luca Pitti
Luca Pitti was a Florentine banker during the period of the republic presided over by Cosimo de' Medici. He was a loyal friend and servant to the Medici and the republic...
, Niccolò Soderini, Diotisalvi Neroni
Diotisalvi Neroni
thumb|250px|Portrait of Diotsalvi Neroni from a nineteenth century engraving.Diotisalvi Neroni was an Italian politician.-Biography:Born in Florence, he was appointed to numerous important positions in that city...
, Angelo Acciaiuoli and his cousin Pierfrancesco de' Medici, using troops provided by Borso d'Este
Borso d'Este
thumb|Borso d'Este, attributed to [[Vicino da Ferrara]], [[Pinacoteca]] of the [[Castello Sforzesco|Sforza Castle]] in [[Milan]], [[Italy]].Borso d'Este was the first Duke of Ferrara, which he ruled from 1450 until his death...
, Duke of Modena and Reggio, and commanded by his brother Ercole d'Este
Ercole d'Este I
Ercole I d'Este was Duke of Ferrara from 1471 until 1505. He was a member of the house of Este. He was nicknamed North Wind and the Diamond.-Biography:...
(planned for August 26, 1466). Piero was warned by Giovanni II Bentivoglio
Giovanni II Bentivoglio
Giovanni II Bentivoglio was an Italian nobleman who ruled as tyrant of Bologna from 1463 until 1506. He had no formal position, but held power as the city's "first citizen." The Bentivoglio family ruled over Bologna from 1443, and repeatedly attempted to consolidate their hold of the Signoria of...
, and was able to escape the coup, in part because his son Lorenzo discovered a road-block set up by the conspirators to capture Piero in his trip towards the Medici villa at Careggi; he was not recognized, and was able to warn his father. The coup failed, as did an attempted repeat backed by Venice
Venice
Venice is a city in northern Italy which is renowned for the beauty of its setting, its architecture and its artworks. It is the capital of the Veneto region...
, using troops commanded by Bartolomeo Colleoni
Bartolomeo Colleoni
Bartolomeo Colleoni was a Venetian condottiero, who became Captain-General of the republic of Venice, where there is a famous statue showing him on horseback.-Biography:...
.

He also continued the family's tradition of artistic patronage, including Gozzoli
Benozzo Gozzoli
Benozzo Gozzoli was an Italian Renaissance painter from Florence. He is best known for a series of murals in the Palazzo Medici-Riccardi depicting festive, vibrant processions with wonderful attention to detail and a pronounced International Gothic influence.-Apprenticeship:He was born Benozzo di...
's fresco Procession of the Magi
Magi Chapel
The Magi Chapel is a chapel in Palazzo Medici Riccardi of Florence, Italy. It includes a famous cycle of frescoes by the Renaissance master Benozzo Gozzoli, painted in 1459-1461....
(in which are also present both of Piero's sons, Lorenzo
Lorenzo de' Medici
Lorenzo de' Medici was an Italian statesman and de facto ruler of the Florentine Republic during the Italian Renaissance. Known as Lorenzo the Magnificent by contemporary Florentines, he was a diplomat, politician and patron of scholars, artists and poets...
and Giuliano
Giuliano di Piero de' Medici
Giuliano de' Medici was the second son of Piero de' Medici and Lucrezia Tornabuoni. As co-ruler of Florence, with his brother Lorenzo the Magnificent, he complemented his brother's image as the "patron of the arts" with his own image as the handsome, sporting, "golden boy."-Death:As the opening...
, as well as Piero himself). His taste was more eclectic than that of his father, extending to Dutch and Flemish work.

He also continued to collect rare books, adding many to the Medici collections. Although not as brilliant a banker as his father, he was able to keep things running smoothly during his tenure.

He died in 1469, due to gout and lung disease, and is buried in the Church of San Lorenzo
Basilica di San Lorenzo di Firenze
The Basilica di San Lorenzo is one of the largest churches of Florence, Italy, situated at the centre of the city’s main market district, and the burial place of all the principal members of the Medici family from Cosimo il Vecchio to Cosimo III...
, next to his brother Giovanni
Giovanni di Cosimo de' Medici
Giovanni de' Medici was an Italian banker and patron of arts.Born in Florence, he was the son of Cosimo de' Medici the Elder and Contessina de' Bardi, and brother to Piero the Gouty....
. The tomb, created by Andrea del Verrocchio
Andrea del Verrocchio
Andrea del Verrocchio , born Andrea di Michele di Francesco de' Cioni, was an Italian sculptor, goldsmith and painter who worked at the court of Lorenzo de' Medici in Florence in the early renaissance. Few paintings are attributed to him with certainty, but a number of important painters were...
, was commissioned by his sons Lorenzo and Giuliano.
The source of this article is wikipedia, the free encyclopedia.  The text of this article is licensed under the GFDL.