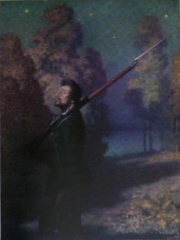 In military terminology, a picket (archaically, picquet, not to be confused with the punishment picquet
Picquet
The picquet was a method of torture used as military punishment in vogue in late medieval Europe.The punishment of the picquet required placing a stake in the ground with the exposed end facing upward. The exposed end had a rounded point. The malefactor was typically a junior officer who had...
) refers to soldiers or troops placed on a line forward of a position to warn against an enemy advance. It can also refer to any unit (for example, an aircraft or ship) performing a similar function. The term is from the British, dating from before 1735 and probably much earlier.

In modern military terms it refers to a soldier or small group of soldiers maintaining a watch. This may mean a watch for the enemy, or other types of watch i.e. "fire picket".

A staggered picket consists of, for example, two soldiers where one soldier is relieved at a time. This is so that on any given picket one soldier is fresh, having just started the picket, while the other is ready to be relieved. Although each soldier is required to maintain watch for the full duration of a shift, halfway through each shift a new soldier is put on watch. Staggered pickets are consequently more difficult to plan than standard pickets.
The source of this article is wikipedia, the free encyclopedia.  The text of this article is licensed under the GFDL.