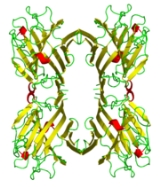 Overview
Phytohaemagglutinin is a lectin
Lectin
Lectins are sugar-binding proteins that are highly specific for their sugar moieties. They play a role in biological recognition phenomena involving cells and proteins. For example, some viruses use lectins to attach themselves to the cells of the host organism during infection...
found in plants, especially legumes. PHA actually consists of two closely related proteins, called leucoagglutinin (PHA-L) and PHA-E. The letters E and L indicate these proteins agglutinate
Agglutination (biology)
Agglutination is the clumping of particles. The word agglutination comes from the Latin agglutinare, meaning "to glue."This occurs in biology in three main examples:...
Erythrocytes and Leukocytes. Phytohaemagglutinin has carbohydrate-binding specificity for a complex oligosaccharide containing
galactose
Galactose
Galactose , sometimes abbreviated Gal, is a type of sugar that is less sweet than glucose. It is a C-4 epimer of glucose....
, N-acetylglucosamine
N-Acetylglucosamine
N-Acetylglucosamine is a monosaccharide derivative of glucose. It is an amide between glucosamine and acetic acid...
, and mannose
Mannose
Mannose is a sugar monomer of the aldohexose series of carbohydrates. Mannose is a C-2 epimer of glucose. It is not part of human metabolism, but is a component of microbial cell walls, and is therefore a target of the immune system and also of antibiotics....
.

It is found in the highest concentrations in uncooked red kidney beans and white kidney beans (also known as cannellini), and it is also found in lower quantities in many other types of green beans and other common beans (Phaseolus vulgaris), as well as broad beans (Vicia faba) such as fava beans.

Can hplc be done for pha plz give quick reply to eelric@gmail.com
More
x