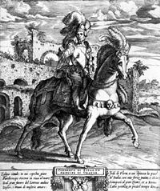 Born at Nozeroy
Nozeroy
Nozeroy is a commune in the Jura department in Franche-Comté in eastern France.-Demographics:As of the census of 1999, the population was 422.The estimate for 2005 was 398.-References:*...
to John IV of Chalon-Arlay
John IV of Chalon-Arlay
John IV of Chalon-Arlay or John of Chalon was a prince of Orange and lord of Chalon-Arlay. He was the son of William VII of Chalon and the father of Philibert of Châlon and Claudia of Châlon....
, Philibert served Emperor Charles V
Charles V, Holy Roman Emperor
Charles V was ruler of the Holy Roman Empire from 1519 and, as Charles I, of the Spanish Empire from 1516 until his voluntary retirement and abdication in favor of his younger brother Ferdinand I and his son Philip II in 1556.As...
as commander in Italy
Italy
Italy , officially the Italian Republic languages]] under the European Charter for Regional or Minority Languages. In each of these, Italy's official name is as follows:;;;;;;;;), is a unitary parliamentary republic in South-Central Europe. To the north it borders France, Switzerland, Austria and...
, fighting in the War of the League of Cognac
War of the League of Cognac
The War of the League of Cognac was fought between the Habsburg dominions of Charles V—primarily Spain and the Holy Roman Empire—and the League of Cognac, an alliance including France, Pope Clement VII, the Republic of Venice, England, the Duchy of Milan and Republic of Florence.- Prelude :Shocked...
. He took part in the Sack of Rome (1527)
Sack of Rome (1527)
The Sack of Rome on 6 May 1527 was a military event carried out by the mutinous troops of Charles V, Holy Roman Emperor in Rome, then part of the Papal States...
and was killed during the final stages of the siege of Florence (1530). An interesting exchange of letters during the siege between him and Charles still survives.