Overview
The Phanerozoic Eon is the current eon in the geologic timescale, and the one during which abundant animal life has existed. It covers roughly 542 million years and goes back to the time when diverse hard-shelled animals first appeared. Its name derives from the Greek words φανερός and ζωή, meaning visible life, since it was once believed that life began in the Cambrian
Cambrian
The Cambrian is the first geological period of the Paleozoic Era, lasting from Mya ; it is succeeded by the Ordovician. Its subdivisions, and indeed its base, are somewhat in flux. The period was established by Adam Sedgwick, who named it after Cambria, the Latin name for Wales, where Britain's...
, the first period of this eon.

I need to know everything about the Phanerozoic era plus the Palezoic and Cenzoic! Please HURRY!!!! I have @) mins< just summerize it or something!
More

Encyclopedia
The Phanerozoic Eon is the current eon in the geologic timescale, and the one during which abundant animal life has existed. It covers roughly 542 million years and goes back to the time when diverse hard-shelled animals first appeared. Its name derives from the Greek words φανερός and ζωή, meaning visible life, since it was once believed that life began in the Cambrian
Cambrian
The Cambrian is the first geological period of the Paleozoic Era, lasting from Mya ; it is succeeded by the Ordovician. Its subdivisions, and indeed its base, are somewhat in flux. The period was established by Adam Sedgwick, who named it after Cambria, the Latin name for Wales, where Britain's...
, the first period of this eon. The time before the Phanerozoic, formerly called the Precambrian
Precambrian
The Precambrian is the name which describes the large span of time in Earth's history before the current Phanerozoic Eon, and is a Supereon divided into several eons of the geologic time scale...
supereon, is now divided into the Hadean
Hadean
The Hadean is the geologic eon before the Archean. It started with the formation of the Earth about 4.7 Ga and ended roughly 3.8 Ga, though the latter date varies according to different sources. The name "Hadean" derives from Hades, Greek for "Underworld", referring to the "hellish"...
, Archaean and Proterozoic
Proterozoic
The Proterozoic is a geological eon representing a period before the first abundant complex life on Earth. The name Proterozoic comes from the Greek "earlier life"...
eons.

The time span of the Phanerozoic includes the rapid emergence of a number of animal phyla; the evolution
Evolution
Evolution is any change across successive generations in the heritable characteristics of biological populations. Evolutionary processes give rise to diversity at every level of biological organisation, including species, individual organisms and molecules such as DNA and proteins.Life on Earth...
of these phyla into diverse forms; the emergence of terrestrial plant
Plant
Plants are living organisms belonging to the kingdom Plantae. Precise definitions of the kingdom vary, but as the term is used here, plants include familiar organisms such as trees, flowers, herbs, bushes, grasses, vines, ferns, mosses, and green algae. The group is also called green plants or...
s; the development of complex plants; the evolution of fish
Fish
Fish are a paraphyletic group of organisms that consist of all gill-bearing aquatic vertebrate animals that lack limbs with digits. Included in this definition are the living hagfish, lampreys, and cartilaginous and bony fish, as well as various extinct related groups...
; the emergence of terrestrial animals; and the development of modern faunas. During the period covered, continent
Continent
A continent is one of several very large landmasses on Earth. They are generally identified by convention rather than any strict criteria, with seven regions commonly regarded as continents—they are : Asia, Africa, North America, South America, Antarctica, Europe, and Australia.Plate tectonics is...
s drifted about, eventually collecting into a single landmass known as Pangaea
Pangaea
Pangaea, Pangæa, or Pangea is hypothesized as a supercontinent that existed during the Paleozoic and Mesozoic eras about 250 million years ago, before the component continents were separated into their current configuration....
and then splitting up into the current continental landmasses.

The Phanerozoic is divided into three eras: the Paleozoic
Paleozoic
The Paleozoic era is the earliest of three geologic eras of the Phanerozoic eon, spanning from roughly...
, Mesozoic
Mesozoic
The Mesozoic era is an interval of geological time from about 250 million years ago to about 65 million years ago. It is often referred to as the age of reptiles because reptiles, namely dinosaurs, were the dominant terrestrial and marine vertebrates of the time...
, and Cenozoic
Cenozoic
The Cenozoic era is the current and most recent of the three Phanerozoic geological eras and covers the period from 65.5 mya to the present. The era began in the wake of the Cretaceous–Tertiary extinction event at the end of the Cretaceous that saw the demise of the last non-avian dinosaurs and...
. In the older literature, the term Phanerozoic is generally used as a label for the time period of interest to paleontologists, but that use of the term seems to be falling into disuse in more modern literature. 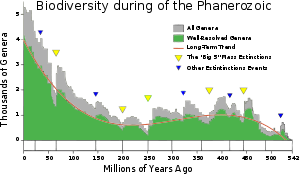 It has been demonstrated that changes in biodiversity through the Phanerozoic correlate much better with the hyperbolic
Hyperbolic growth
When a quantity grows towards a singularity under a finite variation it is said to undergo hyperbolic growth.More precisely, the reciprocal function 1/x has a hyperbola as a graph, and has a singularity at 0, meaning that the limit as x \to 0 is infinity: any similar graph is said to exhibit...
model (widely used in demography
Demography
Demography is the statistical study of human population. It can be a very general science that can be applied to any kind of dynamic human population, that is, one that changes over time or space...
and macrosociology
Macrosociology
Macrosociology is an approach to the discipline which emphasizes the analysis of social systems and populations on a large scale, at the level of social structure, and often at a necessarily high level of theoretical abstraction. Microsociology, by contrast, focuses on the individual social agency...
) than with exponential
Exponential growth
Exponential growth occurs when the growth rate of a mathematical function is proportional to the function's current value...
and logistic
Logistic
Logistic may refer to:* Logistics, the management of resources and their distributions** Logistic engineering, the scientific study of logistics** Military logistics, the study of logistics at the service of military units and operations...
models (traditionally used in population biology
Population biology
Population biology is a study of populations of organisms, especially the regulation of population size, life history traits such as clutch size, and extinction...
and extensively applied to fossil
Fossil
Fossils are the preserved remains or traces of animals , plants, and other organisms from the remote past...
biodiversity as well). The latter models imply that changes in diversity are guided by a first-order positive feedback
Positive feedback
Positive feedback is a process in which the effects of a small disturbance on a system include an increase in the magnitude of the perturbation. That is, A produces more of B which in turn produces more of A. In contrast, a system that responds to a perturbation in a way that reduces its effect is...
(more ancestors, more descendants) and/or a negative feedback
Negative feedback
Negative feedback occurs when the output of a system acts to oppose changes to the input of the system, with the result that the changes are attenuated. If the overall feedback of the system is negative, then the system will tend to be stable.- Overview :...
arising from resource limitation. The hyperbolic model implies a second-order positive feedback. The hyperbolic pattern of the world population
World population
The world population is the total number of living humans on the planet Earth. As of today, it is estimated to be  billion by the United States Census Bureau...
growth arises from a second-order positive feedback between the population size and the rate of technological growth. The hyperbolic character of biodiversity growth in the Phanerozoic can be similarly accounted for by a feedback between the diversity and community structure complexity. It is suggested that the similarity between the curves of biodiversity and human population probably comes from the fact that both are derived from the interference of the hyperbolic trend with cyclical and stochastic dynamics.