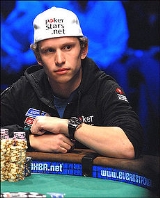 Eastgate was raised in Dalum, a suburb of Odense
Odense
The city of Odense is the third largest city in Denmark.Odense City has a population of 167,615 and is the main city of the island of Funen...
, Denmark
Denmark
Denmark is a Scandinavian country in Northern Europe. The countries of Denmark and Greenland, as well as the Faroe Islands, constitute the Kingdom of Denmark . It is the southernmost of the Nordic countries, southwest of Sweden and south of Norway, and bordered to the south by Germany. Denmark...
and went to Sct. Canute's Gymnasium
Gymnasium (school)
A gymnasium is a type of school providing secondary education in some parts of Europe, comparable to English grammar schools or sixth form colleges and U.S. college preparatory high schools. The word γυμνάσιον was used in Ancient Greece, meaning a locality for both physical and intellectual...
, where he was introduced to poker by his classmates. He attended Aarhus University to study economics, but dropped out to play poker full-time.

Eastgate qualified for the Main Event via the Ladbrokes
Ladbrokes
Ladbrokes plc is a British based gambling company. It is based in Rayners Lane in Harrow, London owned by Bhavin Kakaiya. From 14 May 1999 to 23 February 2006, when it owned the Hilton hotel brand outside the United States, it was known as Hilton Group plc...
Poker website, and travelled to Las Vegas as part of Team Ladbrokes. Eastgate reached the final table with 18,375,000 in starting chips, the fourth largest stack behind Scott Montgomery
Scott Montgomery (poker player)
Scott Montgomery is a poker player from Perth, Ontario, Canada who won his first bracelet at the 2010 World Series of Poker in the $1,000 No-Limit Hold’em Event #36 and was one of the final table players in the 2008 World Series of Poker Main Event. He finished in fifth place earning $3,088,012,...
(19,690,000), Ivan Demidov
Ivan Demidov
Ivan Demidov is a professional poker player from Moscow, Russia.Demidov is one of the original 'November Nine', having made the final table of the World Series of Poker Main Event in 2008. He reached the heads-up stage along with Peter Eastgate, and took second place for $5,809,595...
(24,400,000) and Dennis Phillips
Dennis Phillips (poker player)
Dennis N. Phillips is a poker player and an account manager for Broadway Trucks, a commercial trucking company in St Louis, Missouri. Phillips qualified for the 2008 World Series of Poker Main Event through a $200 satellite tournament at Harrah's St. Louis, his local Harrah's casino...
(26,295,000). Eastgate and Demidov reached the 2008 World Series of Poker
World Series of Poker
The World Series of Poker is a world-renowned series of poker tournaments held annually in Las Vegas and, since 2005, sponsored by Harrah's Entertainment...
(WSOP) heads-up stage. At the final hand, Eastgate had 120.4 million in chips, and Demidov went all in with 16.5 million chips. Eastgate beat Demidov at 2:33 AM local time, after a two-day final table consisting of 274 hands that took 15 hours and 28 minutes to play. Eastgate won the first place prize of $9,152,416.

In 2009, Eastgate defended his Main Event title until day 6. He was eliminated in 78th place, defeated by a flush made on the river, and he was the last remaining Main Event Champion at the time of his elimination.

Prior to the WSOP, Eastgate's live tournament results included a money finish in the 2008 European Poker Tour event in Copenhagen and a final table finish at the 2007 Irish Poker Open
Irish Poker Open
The paddypowerpoker.com Irish Poker Open is the longest running No Limit Texas hold 'em poker tournament in Europe and second longest in the world after the World Series of Poker....
. Eastgate's previous biggest win was $46,714 at the 2007 Paddy Power Irish Open. After his WSOP Main Event victory Eastgate took to the tournament trail and quickly found success. He cashed in the European Poker Tour (EPT) PokerStars Caribbean Adventure (PCA) Main Event and then won the $5,000 side event for $343,000 Eastgate came second in the 2009 London EPT, winning £530,000.

In July 2010, Eastgate announced that he was taking a break from poker in a statement through his sponsor PokerStars.com, saying, "When I started playing poker for a living, it was never my goal to spend the rest of my life as a professional poker player. My goal was to become financially independent. I achieved that by winning the WSOP main event in 2008. The period following has taken me on a worldwide tour, where I have seen some amazing places and met many new people; it has been a great experience."

“In the 20 months following my WSOP win, I feel that I have lost my motivation for playing high-level poker along the way, and I have decided that now is the time to find out what I want to do with the rest of my life. What this will be, I do not yet know. I have decided to take a break from live tournament poker, and try to focus on Peter Eastgate, the person. I want to thank PokerStars, my friends and family for their support over the last 20 months, and for their support in my decision to take a break from poker."

PokerStars said of Eastgate's decision: "“We know that poker will miss this world-class player and world-class role model, but PokerStars has only the deepest respect for Peter’s decision. Poker is about determination and excitement, and if Peter lacks this in his game, the right decision is to take a break. Peter has played amongst world champions and he has carried his title in the most admirable fashion.”
In November 2010, Eastgate put his main event bracelet up for auction on eBay
EBay
eBay Inc. is an American internet consumer-to-consumer corporation that manages eBay.com, an online auction and shopping website in which people and businesses buy and sell a broad variety of goods and services worldwide...
with a starting bid of $16,000. It eventually sold for $147,500 and this money was donated to UNICEF.

In February 2011, Eastgate announced that he would be ending his eight-month break to return to poker.