Encyclopedia
Periodic acid, or iodic acid is an oxoacid
Oxoacid
An oxoacid is an acid that contains oxygen. To be more specific, it is an acid that:#contains oxygen#contains at least one other element#has at least one hydrogen atom bound to oxygen#forms an ion by the loss of one or more protons....
of iodine
Iodine
Iodine is a chemical element with the symbol I and atomic number 53. The name is pronounced , , or . The name is from the , meaning violet or purple, due to the color of elemental iodine vapor....
having chemical formula
Chemical formula
A chemical formula or molecular formula is a way of expressing information about the atoms that constitute a particular chemical compound....
HIO4 or H5IO6.

In dilute aqueous solution, periodic acid exists as discrete hydronium
Hydronium
In chemistry, a hydronium ion is the cation , a type of oxonium ion produced by protonation of water. This cation is often used to represent the nature of the proton in aqueous solution, where the proton is highly solvated...
(H3O+) and metaperiodate
Periodate
Periodate is an anion composed of iodine and oxygen. Periodates include two forms. The metaperiodate ion is IO4−; the orthoperiodate ion is IO65−. Usually both forms are called periodates. Periodate is the conjugate base of periodic acid....
(IO4−) ions. When more concentrated, orthoperiodic acid, H5IO6, is formed; this dissociates into hydronium and orthoperiodate (IO65−) ions. In practice, the metaperiodate and orthoperiodate ions co-exist in a pH
PH
In chemistry, pH is a measure of the acidity or basicity of an aqueous solution. Pure water is said to be neutral, with a pH close to 7.0 at . Solutions with a pH less than 7 are said to be acidic and solutions with a pH greater than 7 are basic or alkaline...
-dependent chemical equilibrium
Chemical equilibrium
In a chemical reaction, chemical equilibrium is the state in which the concentrations of the reactants and products have not yet changed with time. It occurs only in reversible reactions, and not in irreversible reactions. Usually, this state results when the forward reaction proceeds at the same...
:

Orthoperiodic acid can be obtained as a crystalline solid that can be dehydrated to metaperiodic acid, HIO4. Further heating gives diiodine pentoxide (I2O5) and oxygen
Oxygen
Oxygen is the element with atomic number 8 and represented by the symbol O. Its name derives from the Greek roots ὀξύς and -γενής , because at the time of naming, it was mistakenly thought that all acids required oxygen in their composition...
rather than the expected anhydride diiodine heptoxide; this anhydride does not occur in nature but can be formed synthetically.

Periodic acid is used in organic chemistry for structural analysis. Periodic acid will cleave vicinal
Vicinal (chemistry)
In chemistry vicinal stands for any two functional groups bonded to two adjacent carbon atoms. For example the molecule 2,3-dibromobutane carries two vicinal bromine atoms and 1,3-dibromobutane does not....
diol
Diol
A diol or glycol is a chemical compound containing two hydroxyl groups A geminal diol has two hydroxyl groups bonded to the same atom...
s into two aldehyde
Aldehyde
An aldehyde is an organic compound containing a formyl group. This functional group, with the structure R-CHO, consists of a carbonyl center bonded to hydrogen and an R group....
or ketone
Ketone
In organic chemistry, a ketone is an organic compound with the structure RCR', where R and R' can be a variety of atoms and groups of atoms. It features a carbonyl group bonded to two other carbon atoms. Many ketones are known and many are of great importance in industry and in biology...
fragments. This can be useful in determining the structure of carbohydrates. It is also used in organic synthesis as an oxidising agent of moderate strength 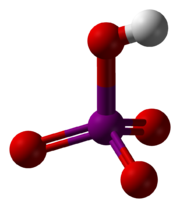