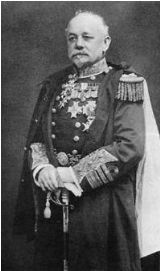 Encyclopedia
Admiral
Admiral (United Kingdom)
Admiral is a senior rank of the Royal Navy of the United Kingdom, which equates to the NATO rank code OF-9, outranked only by the rank Admiral of the Fleet...
Sir Percy Moreton Scott, 1st Baronet GCB
Order of the Bath
The Most Honourable Order of the Bath is a British order of chivalry founded by George I on 18 May 1725. The name derives from the elaborate mediæval ceremony for creating a knight, which involved bathing as one of its elements. The knights so created were known as Knights of the Bath...
KCVO
Royal Victorian Order
The Royal Victorian Order is a dynastic order of knighthood and a house order of chivalry recognising distinguished personal service to the order's Sovereign, the reigning monarch of the Commonwealth realms, any members of her family, or any of her viceroys...
(10 July 1853 – 18 October 1924) was a British
United Kingdom
The United Kingdom of Great Britain and Northern IrelandIn the United Kingdom and Dependencies, other languages have been officially recognised as legitimate autochthonous languages under the European Charter for Regional or Minority Languages...
Royal Navy
Royal Navy
The Royal Navy is the naval warfare service branch of the British Armed Forces. Founded in the 16th century, it is the oldest service branch and is known as the Senior Service...
officer and a pioneer in modern naval gunnery
Naval artillery
Naval artillery, or naval riflery, is artillery mounted on a warship for use in naval warfare. Naval artillery has historically been used to engage either other ships, or targets on land; in the latter role it is currently termed naval gunfire fire support...
.

Scott was educated at Eastman's Naval Academy, Southsea
Southsea
Southsea is a seaside resort located in Portsmouth at the southern end of Portsea Island in the county of Hampshire in England. Southsea is within a mile of Portsmouth's city centre....
, and entered the navy as a cadet in 1866, at the age of thirteen, and in 1868 received a post on HMS Forte, a 50-gun frigate
Frigate
A frigate is any of several types of warship, the term having been used for ships of various sizes and roles over the last few centuries.In the 17th century, the term was used for any warship built for speed and maneuverability, the description often used being "frigate-built"...
. He served in the Third Anglo-Ashanti War and was based at Cape Coast Castle
Cape Coast Castle
Cape Coast Castle is a fortification in Ghana built by Swedish traders. The first timber construction on the site was erected in 1653 for the Swedish Africa Company and named Carolusborg after King Charles X of Sweden. It was later rebuilt in stone....
. He was present at the 1882 British naval bombardment of Egypt
Egypt
Egypt , officially the Arab Republic of Egypt, Arabic: , is a country mainly in North Africa, with the Sinai Peninsula forming a land bridge in Southwest Asia. Egypt is thus a transcontinental country, and a major power in Africa, the Mediterranean Basin, the Middle East and the Muslim world...
ian forts at Alexandria
Alexandria
Alexandria is the second-largest city of Egypt, with a population of 4.1 million, extending about along the coast of the Mediterranean Sea in the north central part of the country; it is also the largest city lying directly on the Mediterranean coast. It is Egypt's largest seaport, serving...
, and while witnessing how inaccurate the British gunners were, began to form his own ideas on the nature of naval gunfire. When promoted to second in command of HMS Edinburgh
HMS Edinburgh (1882)
HMS Edinburgh was an ironclad battleship of the Colossus class which served in the Royal Navy of the Victorian era. She was the sister ship of HMS Colossus, being started before her but being completed after....
in 1886, Scott attempted to implement some of his ideas for gunnery improvement by holding regular firing practices, but was forced to focus most of his crew's energies on the traditional naval task of cleaning the ship.

Scott was given his first full command in 1896, when promoted to captain of HMS Scylla, a 3400-ton cruiser in the British Mediterranean
Mediterranean Sea
The Mediterranean Sea is a sea connected to the Atlantic Ocean surrounded by the Mediterranean region and almost completely enclosed by land: on the north by Anatolia and Europe, on the south by North Africa, and on the east by the Levant...
Fleet. There he was able to implement his theories on gunnery, scoring the unprecedented success of 80% during the 1897 gunnery trials. His accomplishment was unbelievable for the time, and many thought that he had cheated in order to gain such a success. As a result of the turmoil, the Lords of the Admiralty removed him from command of HMS Scylla and placed him on half-pay. With the intervention of Jackie Fisher, he was later moved to HMS Excellent, the naval gunnery school at Whale Island, Hampshire
Whale Island, Hampshire
Whale Island is a small island in Portsmouth Harbour, close by Portsea Island. It is currently home to HMS Excellent, the oldest shore training establishment within the Royal Navy, and the Headquarters of Commander in Chief, Fleet.-Early history:...
. The Excellent served as a training ground, especially for gunnery, and Scott was able to continue to refine his ideas. This included ways to increase artillery accuracy as well as improve the speed of loading the guns. 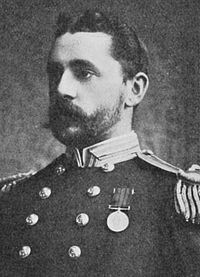 Until the end of the nineteenth century, the accepted range at which warships would open fire on an enemy was 2,000 yards. The development of the torpedo as a practical weapon forced a change in this policy, and it became necessary to engage an enemy at ranges outside torpedo range. This in turn meant that the old system whereby a gunlayer in each turret pointed and fired the turret guns independently could no longer be expected to achieve a significant hit rate on an opposing ship. Scott was instrumental in encouraging the development and installation, initially in Dreadnought Battleships
Dreadnought
The dreadnought was the predominant type of 20th-century battleship. The first of the kind, the Royal Navy's had such an impact when launched in 1906 that similar battleships built after her were referred to as "dreadnoughts", and earlier battleships became known as pre-dreadnoughts...
and Battlecruiser
Battlecruiser
Battlecruisers were large capital ships built in the first half of the 20th century. They were developed in the first decade of the century as the successor to the armoured cruiser, but their evolution was more closely linked to that of the dreadnought battleship...
s, of Director Firing, a system whereby the guns were all pointed, elevated and fired from a single point, usually at the top of the foremast. By firing all the guns simultaneously it was possible to observe the simultaneous splashes produced and correct the aim visually. This system was only practical in ships having a uniform calibre main armament, which dreadnought battleships and battlecruisers had.

Before the First World War, Captain Frederic Dreyer
Frederic Charles Dreyer
Admiral Sir Frederic Charles Dreyer, GBE, KCB was an officer of the Royal Navy who developed a fire control system for British warships...
developed a system which enabled a target ship's range and bearing to be plotted continuously so that the proper range and deflection to hit it could then be calculated. These data were then relayed to the director, allowing a further improvement to accuracy. In 1903 Dreyer had described a device, later developed by Vickers and Scott as the Vickers range clock
Vickers range clock
The Vickers Range Clock was a clockwork device used by the Royal Navy for continuously calculating the range to an enemy ship.In 1903, Percy Scott described a device he'd invented which was similar to the Vickers clock. In April 1904, Vickers worked with Scott and patented their device, samples of...
; it automatically kept track of the changing range to an enemy ship.

In 1907 Scott was in command of the 1st Cruiser squadron of the Channel Fleet
Channel Fleet
The Channel Fleet was the Royal Navy formation of warships that defended the waters of the English Channel from 1690 to 1909.-History:The Channel Fleet dates back at least to 1690 when its role was to defend England against the French threat under the leadership of Edward Russell, 1st Earl of...
, under the command of Lord Charles Beresford
Lord Charles Beresford
Charles William de la Poer Beresford, 1st Baron Beresford GCB GCVO , styled Lord Charles Beresford between 1859 and 1916, was a British Admiral and Member of Parliament....
. Because of a forthcoming fleet inspection by Kaiser Wilhelm II Beresford signalled all ships to abandon any exercises they were currently engaged in, to enable them to be painted and tidied. Scott's ships were in the middle of a gunnery exercise; he lost his temper and sent an insubordinate signal which resulted in a public reprimand. The Kaiser arrived two hours late and did not have time to inspect the fleet.

In July 1908 came what is referred to as the second signalling incident. Beresford signalled to the two columns of the third division of the fleet, which was under Scott's command, to turn inwards together. As the two columns were steaming on a parallel course with a separation of 1,200 yards (six cables distance) this would have caused the leading ships, the Good Hope and Argyll to collide. Scott ordered the Captain of the Good Hope to disobey the order, thus avoiding a repetition of the Victoria
HMS Victoria (1887)
HMS Victoria was the lead ship in her class of two battleships of the Royal Navy. On 22 June 1893, she collided with near Tripoli, Lebanon during manoeuvres and quickly sank, taking 358 crew with her, including the commander of the British Mediterranean Fleet, Vice-Admiral Sir George Tryon...
- Camperdown
HMS Camperdown (1885)
HMS Camperdown was an Admiral-class battleship of the Royal Navy, named after Adam Duncan, 1st Viscount Duncan of Camperdown.She was a full sister to , and was an improved version of the earlier and . In comparison to these earlier ships, she had an increased thickness of barbette armour, and a...
disaster. Beresford attempted to have Scott court-martialled, but the Admiralty refused. Scott was moved to a command outside Beresford's orbit, and allowed to fly his flag until February 1909, when he hauled it down and came ashore.

In 1919 Scott began a remorseless but ultimately unsuccessful campaign in the Times (London) against the battleship, saying I regarded the surface battleship as dead before the War, and I think her more dead now if that is possible.