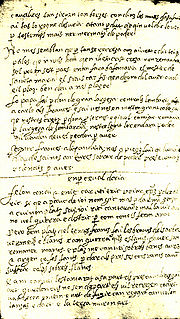 Perceval Doria was a Genoese
Genoa
Genoa |Ligurian]] Zena ; Latin and, archaically, English Genua) is a city and an important seaport in northern Italy, the capital of the Province of Genoa and of the region of Liguria....
naval and military leader in the thirteenth century. A Ghibelline, he was a partisan of the Hohenstaufen
Hohenstaufen
The House of Hohenstaufen was a dynasty of German kings in the High Middle Ages, lasting from 1138 to 1254. Three of these kings were also crowned Holy Roman Emperor. In 1194 the Hohenstaufens also became Kings of Sicily...
in Italy and served the Emperor Frederick II and Manfred of Sicily
Manfred of Sicily
Manfred was the King of Sicily from 1258 to 1266. He was a natural son of the emperor Frederick II of Hohenstaufen but his mother, Bianca Lancia , is reported by Matthew of Paris to have been married to the emperor while on her deathbed.-Background:Manfred was born in Venosa...
as vicar
Vicar
In the broadest sense, a vicar is a representative, deputy or substitute; anyone acting "in the person of" or agent for a superior . In this sense, the title is comparable to lieutenant...
of Romagna
Romagna
Romagna is an Italian historical region that approximately corresponds to the south-eastern portion of present-day Emilia-Romagna. Traditionally, it is limited by the Apennines to the south-west, the Adriatic to the east, and the rivers Reno and Sillaro to the north and west...
, the March of Ancona
March of Ancona
The March of Ancona or marca Anconitana was a frontier march centred on the city of Ancona and, then, Macerata in the Middle Ages...
, and the Duchy of Spoleto
Duchy of Spoleto
The independent Duchy of Spoleto was a Lombard territory founded about 570 in central Italy by the Lombard dux Faroald.- Lombards :The Lombards, a Germanic people, had invaded Italy in 568 and conquered much of it, establishing a Kingdom divided between several dukes dependent on the King, who had...
.

He was probably a member of the famous Doria
Doria
Doria, originally de Auria , meaning "the sons of Auria", and then de Oria or d'Oria, is the name of an old and extremely wealthy Genoese family who played a major role in the history of the Republic of Genoa and in Italy, from the 12th century to the 16th century.-Origins:According to legend, a...
family, whose name was originally D'Oria or da Otranto. Between 1228 and 1243 he assumed the character of a podestà
Podestà
Podestà is the name given to certain high officials in many Italian cities, since the later Middle Ages, mainly as Chief magistrate of a city state , but also as a local administrator, the representative of the Emperor.The term derives from the Latin word potestas, meaning power...
in several Provençal
Provence
Provence ; Provençal: Provença in classical norm or Prouvènço in Mistralian norm) is a region of south eastern France on the Mediterranean adjacent to Italy. It is part of the administrative région of Provence-Alpes-Côte d'Azur...
and north Italian
Lombardy
Lombardy is one of the 20 regions of Italy. The capital is Milan. One-sixth of Italy's population lives in Lombardy and about one fifth of Italy's GDP is produced in this region, making it the most populous and richest region in the country and one of the richest in the whole of Europe...
cities, such as Arles
Arles
Arles is a city and commune in the south of France, in the Bouches-du-Rhône department, of which it is a subprefecture, in the former province of Provence....
, Avignon
Avignon
Avignon is a French commune in southeastern France in the départment of the Vaucluse bordered by the left bank of the Rhône river. Of the 94,787 inhabitants of the city on 1 January 2010, 12 000 live in the ancient town centre surrounded by its medieval ramparts.Often referred to as the...
, Asti
Asti
Asti is a city and comune of about 75,000 inhabitants located in the Piedmont region of northwestern Italy, about 55 kilometres east of Turin in the plain of the Tanaro River...
, and Parma
Parma
Parma is a city in the Italian region of Emilia-Romagna famous for its ham, its cheese, its architecture and the fine countryside around it. This is the home of the University of Parma, one of the oldest universities in the world....
. In 1255 Manfred nominated him to the vicariate general of Ancona and in 1258 that of Romagna. With relations between Manfred and Pope Urban IV
Pope Urban IV
Pope Urban IV , born Jacques Pantaléon, was Pope, from 1261 to 1264. He was not a cardinal, and there have been several Popes since him who have not been Cardinals, including Urban V and Urban VI.-Biography:...
deteriorating, Doria was forced to put Spoleto
Spoleto
Spoleto is an ancient city in the Italian province of Perugia in east central Umbria on a foothill of the Apennines. It is S. of Trevi, N. of Terni, SE of Perugia; SE of Florence; and N of Rome.-History:...
to fire and the sword in 1259. Five years later, in 1264, he led a small army of Saracens and Germans against Charles of Anjou, who contested Manfred's throne. On the ensuing march he drowned in the river Nera di Narco
Nera River (Italy)
The Nera is a 116 km long river which flows almost entirely in Umbria, Italy. A tributary to the Tiber, its sources are in the Monti Sibillini, east of Foligno. It flows southward past Terni and Narni. It joins the Tiber near Orte.-See also:...
near Arrone
Arrone
Arrone is a comune in the Province of Terni in the Italian region Umbria, located about 70 km southeast of Perugia and about 10 km east of Terni in the Valnerina.-History:...
with his horse.

Doria was also a troubadour
Troubadour
A troubadour was a composer and performer of Old Occitan lyric poetry during the High Middle Ages . Since the word "troubadour" is etymologically masculine, a female troubadour is usually called a trobairitz....
of the Sicilian School
Sicilian School
The Sicilian School was a small community of Sicilian, and to a lesser extent, mainland Italian poets gathered around Frederick II, most of them belonging to his court, the Magna Curia. Headed by Giacomo da Lentini, they produced more than three-hundred poems of courtly love between 1230 and 1266,...
, composing two cansos
Canso (song)
The canso is a song style used by the troubadours. It consists of three parts. The first stanza is the exordium, where the composer explains his purpose. The main body of the song occurs in the following stanzas, and usually draw out a variety of relationships with the exordium. The canso can end...
in Occitan as well as two poems in Italian
Italian language
Italian is a Romance language spoken mainly in Europe: Italy, Switzerland, San Marino, Vatican City, by minorities in Malta, Monaco, Croatia, Slovenia, France, Libya, Eritrea, and Somalia, and by immigrant communities in the Americas and Australia...
. In one poem, entitled Felon cor ai et enic (1258/9), he praised Manfred's bravery and magnanimity. His other Occitan poem was a tenso
Tenso
A tenso is a style of Occitan song favoured by the troubadours. It takes the form of a debate in which each voice defends a position on a topic relating to love or ethics. Closely related genres include the partimen and the cobla exchange...
, Per aquest cors, del teu trip, with Felip de Valenza.
The source of this article is wikipedia, the free encyclopedia.  The text of this article is licensed under the GFDL.