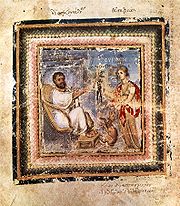 Pedanius Dioscorides was a Greek physician, pharmacologist and botanist, the author of a 5-volume encyclopedia about herbal medicine and related medicinal substances (a pharmacopeia), that was widely read for more than 1,500 years.

A native of Anazarbus
Anazarbus
Anazarbus in Ancient Cilicia was an ancient Cilician city, situated in Anatolia in modern Turkey, in the present Çukurova about 15 km west of the main stream of the present Ceyhan River and near its tributary the Sempas Su.A lofty isolated ridge formed its acropolis...
, Cilicia
Cilicia
In antiquity, Cilicia was the south coastal region of Asia Minor, south of the central Anatolian plateau. It existed as a political entity from Hittite times into the Byzantine empire...
, Asia Minor
Asia Minor
Asia Minor is a geographical location at the westernmost protrusion of Asia, also called Anatolia, and corresponds to the western two thirds of the Asian part of Turkey...
, Dioscorides "practiced in Rome at the time of Nero
Nero
Nero , was Roman Emperor from 54 to 68, and the last in the Julio-Claudian dynasty. Nero was adopted by his great-uncle Claudius to become his heir and successor, and succeeded to the throne in 54 following Claudius' death....
. He was a surgeon with the army of the emperor, so he had the opportunity to travel extensively, seeking medicinal substances (plants and minerals) from all over the Roman and Greek world."

Between 50 and 70 AD Dioscorides wrote a five-volume book in his native Greek, , known in English by its Latin title De Materia Medica ("Regarding Medical Materials") that is a "precursor to all modern pharmacopeias". It remained in use until about CE 1600. Unlike many classical authors, his works were not "rediscovered" in the Renaissance, because his book never left circulation. In the medieval age, De Materia Medica was circulated in Latin, Greek, and Arabic. While being reproduced in manuscript form through the centuries, it was often supplemented with commentary on Dioscorides' work, with minor additions from Arabic and Indian sources. The most important Greek manuscripts survive today in Mount Athos
Mount Athos
Mount Athos is a mountain and peninsula in Macedonia, Greece. A World Heritage Site, it is home to 20 Eastern Orthodox monasteries and forms a self-governed monastic state within the sovereignty of the Hellenic Republic. Spiritually, Mount Athos comes under the direct jurisdiction of the...
monasteries. A number of illustrated manuscripts of the De Materia Medica survive. The most famous of these is the lavishly illustrated Vienna Dioscurides
Vienna Dioscurides
The Vienna Dioscurides or Vienna Dioscorides is an early 6th century illuminated manuscript of De Materia Medica by Dioscorides in Greek. It is an important and rare example of a late antique scientific text...
produced in Constantinople in 512/513 AD. Densely illustrated Arabic copies survive from the 12th and 13th centuries.

De Materia Medica is the premiere historical source of information about the medicines used by the Greeks, Romans, and other cultures of antiquity. The work also records the Dacian and Thracian
Thracian language
The Thracian language was the Indo-European language spoken in ancient times in Southeastern Europe by the Thracians, the northern neighbors of the Ancient Greeks. The Thracian language exhibits satemization: it either belonged to the Satem group of Indo-European languages or it was strongly...
names for some plants, which otherwise would have been lost. The work presents about 600 plants in all, although the descriptions are sometimes obscurely phrased. "Numerous individuals from the Middle Ages on have struggled with the identity of the recondite kinds" and some of the botanical identifications remain insecure guesses by today's experts. 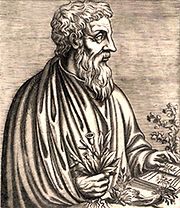