Is there someone familar with the area in MS where a creek off of the Pearl River goes down through Scott Co by the name of Balutca Creek or something...
More 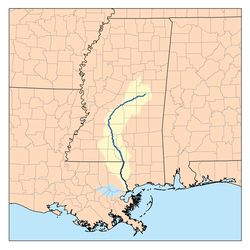 The Pearl passes near or through the following towns (in order, north to south):

West of Picayune, about 50 miles (80.5 km) above the mouth, the river forks. The East Pearl River empties into Lake Borgne where the dredged Pearl River Channel meets the Gulf Intracoastal Waterway
Gulf Intracoastal Waterway
The Gulf Intracoastal Waterway is the portion of the Intracoastal Waterway located along the Gulf Coast of the United States. It is a navigable inland waterway running approximately 1700 kilometers from Carrabelle, Florida, to Brownsville, Texas.The waterway provides a channel with a controlling...
. The discharge flows eastward past Grand Island through St. Joe Pass and into the Mississippi Sound
Mississippi Sound
The Mississippi Sound is a sound along the Gulf Coast of the United States. It runs east-west along the southern coasts of Mississippi and Alabama, from Waveland, Mississippi, to the Dauphin Island Bridge, a distance of about 145 kilometers...
. The West Pearl River, on the other hand, flows into The Rigolets, thence into Lake Borgne. Both discharges eventually reach the Gulf of Mexico. The Pearl River serves as the 115 miles (185.1 km) boundary
River borders of U.S. states
Because of its unique history, many of the boundaries of political divisions of the United States were artificially constructed . Therefore, many U.S. states have straight lines as boundaries, especially in the West...
between Mississippi and Louisiana in its lower reach near the Gulf of Mexico
Gulf of Mexico
The Gulf of Mexico is a partially landlocked ocean basin largely surrounded by the North American continent and the island of Cuba. It is bounded on the northeast, north and northwest by the Gulf Coast of the United States, on the southwest and south by Mexico, and on the southeast by Cuba. In...
.

The U.S. Army Corps of Engineers has undertaken three significant navigation projects in the Pearl River Basin. In 1880, Congress authorized a 5 feet (1.5 m) navigation channel
Inland waterways of the United States
The inland waterways of the United States include over 25,000 miles of navigable waters. Much of the commercially important waterways of the United States consist of the Mississippi River System—the Mississippi River and connecting waterways.Almost all of the navigable rivers and canals in...
on the West Pearl River from Jackson to the Rigolets. That project was discontinued in 1922. Beginning in 1910, a channel was dredged from the mouth of the East Pearl River into Lake Borgne, a project which is maintained on an irregular basis. In 1935, the West Pearl River Navigation Project was authorized. It provided for a navigation channel from Bogalusa to the mouth of the West Pearl River. The project includes a canal with three locks. The Corps of Engineers placed the project in "caretaker" status in the 1970s because of a decline in commercial traffic. Maintenance dredging resumed in December 1988.

In the 1950s, underwater concrete sills were constructed to help maintain water levels in the navigation channel. This has prevented Gulf sturgeon
Sturgeon
Sturgeon is the common name used for some 26 species of fish in the family Acipenseridae, including the genera Acipenser, Huso, Scaphirhynchus and Pseudoscaphirhynchus. The term includes over 20 species commonly referred to as sturgeon and several closely related species that have distinct common...
and other migratory species
Fish migration
Many types of fish migrate on a regular basis, on time scales ranging from daily to annually or longer, and over distances ranging from a few metres to thousands of kilometres...
from accessing upstream areas. A rock ramp constructed in 2003 helps fish navigate over one of the sills, but environmental groups propose further work to mitigate the effects of the navigation project.

Hurricane Katrina
Hurricane Katrina
Hurricane Katrina of the 2005 Atlantic hurricane season was a powerful Atlantic hurricane. It is the costliest natural disaster, as well as one of the five deadliest hurricanes, in the history of the United States. Among recorded Atlantic hurricanes, it was the sixth strongest overall...
in August 2005 caused extensive damage in the Pearl River. Bottom sediments and marsh vegetation—including uprooted cypress
Taxodium distichum
Taxodium distichum is a species of conifer native to the southeastern United States.-Characteristics:...
and oak
Southern live oak
Quercus virginiana, also known as the southern live oak, is a normally evergreen oak tree native to the southeastern United States. Though many other species are loosely called live oak, the southern live oak is particularly iconic of the Old South....
trees—blocked the mouth of the West Pearl and other parts of the channel, preventing navigation and diverting flow. The Louisiana Department of Wildlife & Fisheries and other agencies removed 27,000 cubic meters (35,000 yd³) of debris.

The journalist and poet Pearl Rivers
Pearl Rivers
Eliza Jane Poitevent Holbrook Nicholson , who wrote under the nom de plume Pearl Rivers, was a United States journalist and poet. She took the name from the Pearl River near her home in Mississippi.-Early life:...
and the country music band Pearl River
Pearl River (band)
-Track listing:#"I Wanna Be in the Picture" - 2:46#"Hole Where the Heart Oughta Be" - 3:00#"Does She Need Me" - 3:09...
named themselves after this river. In wrestling, Ahmed Johnson's
Anthony Norris
Anthony "Tony" Norris , better known by his ring name, Ahmed Johnson, is an American former professional wrestler. He is best known for his stint in the World Wrestling Federation, where he is a one time Intercontinental Champion and the first-ever winner of the Kuwait Cup.-Global Wrestling...
finishing maneuver was known as the Pearl River Plunge.