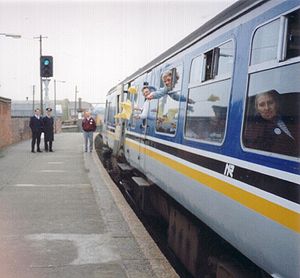 The founding Chairman of the Peace Train Organisation was the writer and broadcaster Sam McAughtry
Sam McAughtry
Sam McAughtry is a writer and broadcaster who was born in Belfast in 1923, lived in the loyalist Tiger's Bay area and was educated at St Barnabas'. [Date of birth given as 1921 on fly-leaf and also on page one of text of "McAughtry's War" ].He left school at 14 and served in the Royal Air Force...
while the organisation in the Republic of Ireland was headed up by Chris Hudson
Chris Hudson
Christopher Reshard Hudson is a former professional American football safety who played for the Jacksonville Jaguars, Chicago Bears, and Atlanta Falcons between 1995 and 2001. Hudson was the winner of the 1994 Jim Thorpe Award as a member of the Colorado Buffaloes.-References:...
. Other key figures in the organisation south of the border were the then Workers Party MEP Proinsias De Rossa
Proinsias De Rossa
Proinsias De Rossa is an Irish Labour Party politician and Member of the European Parliament for the Dublin constituency. He a former President of the Workers' Party and subsequently leader of Democratic Left, and later, a senior member of the Labour Party. He was Minister for Social Welfare from...
, Tom French (politician)
Tom French (politician)
Tom French is a former President of the Workers' Party of Ireland and former member of Craigavon Borough Council.Born in Belfast in 1934, French joined Sinn Féin as a youth and remained with the party as it evolved into the Workers' Party....
and southern secretary Seán Ó Cionnaith
Seán Ó Cionnaith
Seán Ó Cionnaith was an Irish socialist republican politician, and a prominent member of The Workers' Party....
.

The organisation organised a Peace Train from Dublin to Belfast - an actual train hired out for the day which brought hundreds of people across the border from all over Ireland as a symbolic gesture to protest the bombing of the railway line. The group marched to Belfast City Hall where an open-air rally was held, supported by hundreds of activists and trade unionists. The event was not without incident however as a window was broken by a stone-throwing youth and the train was held up by another bomb scare on the line.

It was derided as being a Workers Party PR-stunt by many republicans in Sinn Féin
Sinn Féin
Sinn Féin is a left wing, Irish republican political party in Ireland. The name is Irish for "ourselves" or "we ourselves", although it is frequently mistranslated as "ourselves alone". Originating in the Sinn Féin organisation founded in 1905 by Arthur Griffith, it took its current form in 1970...
and Fianna Fáil
Fianna Fáil
Fianna Fáil – The Republican Party , more commonly known as Fianna Fáil is a centrist political party in the Republic of Ireland, founded on 23 March 1926. Fianna Fáil's name is traditionally translated into English as Soldiers of Destiny, although a more accurate rendition would be Warriors of Fál...
.

A number of further Peace Train events were held, including a large rally at Oriel Park
Oriel Park
Oriel Park is a multi-purpose stadium in Dundalk, County Louth, Republic of Ireland. It is used mostly for football matches and is the home stadium of Dundalk F.C. Its current capacity is about 4,500 with 3,000 seats. The ground was opened in 1919.-History:...
football ground in Dundalk
Dundalk
Dundalk is the county town of County Louth in Ireland. It is situated where the Castletown River flows into Dundalk Bay. The town is close to the border with Northern Ireland and equi-distant from Dublin and Belfast. The town's name, which was historically written as Dundalgan, has associations...
, Co. Louth.